The optical transfer function (OTF) of an optical system such as a camera, microscope, human eye, or projector specifies how different spatial frequencies are handled by the system. It is used by optical engineers to describe how the optics project light from the object or scene onto a photographic film, detector array, retina, screen, or simply the next item in the optical transmission chain. A variant, the modulation transfer function (MTF), neglects phase effects but is equivalent to the OTF in many situations.

Either transfer function specifies the response to a periodic sine-wave pattern passing through the lens system, as a function of its spatial frequency or period, and its orientation. Formally, the OTF is defined as the Fourier transform of the point spread function (PSF, that is, the impulse response of the optics, the image of a point source). As a Fourier transform, the OTF is complex-valued; but it will be real-valued in the common case of a PSF that is symmetric about its center. The MTF is formally defined as the magnitude (absolute value) of the complex OTF.

In practice, many factors result in considerable blurring of a reproduced image, such that patterns with a spatial frequency just below the Nyquist rate may not even be visible, and the finest patterns that can appear 'washed out' as shades of grey, not black and white. A major factor is usually the impossibility of making the perfect 'brick wall' optical filter (often realized as a 'phase plate' or a lens with specific blurring properties in digital cameras and video camcorders). Such a filter is necessary to reduce aliasing by eliminating spatial frequencies above the Nyquist rate of the display.

Oversampling and downconversion to maintain the optical transfer function

The only way in practice to approach the theoretical sharpness possible in a digital imaging system such as a camera is to use more pixels in the camera sensor than samples in the final image, and 'downconvert' or 'interpolate' using special digital processing which cuts off high frequencies above the Nyquist rate to avoid aliasing whilst maintaining a reasonably flat MTF up to that frequency. This approach was first taken in the 1970s when flying spot scanners, and later CCD line scanners were developed, which sampled more pixels than were needed and then downconverted, which is why movies have always looked sharper on television than other material shot with a video camera. The only theoretically correct way to interpolate or downconvert is by use of a steep low-pass spatial filter, realized by convolution with a two-dimensional sin(x)/x weighting function which requires powerful processing. In practice, various mathematical approximations to this are used to reduce the processing requirement. These approximations are now implemented widely in video editing systems and in image processing programs such as Photoshop.

Just as standard definition video with a high contrast MTF is only possible with oversampling, so HD television with full theoretical sharpness is only possible by starting with a camera that has a significantly higher resolution, followed by digitally filtering. With movies now being shot in 4k and even 8k video for the cinema, we can expect to see the best pictures on HDTV only from movies or material shot at the higher standard. However much we raise the number of pixels used in cameras, this will always remain true in absence of a perfect optical spatial filter. Similarly, a 5-megapixel image obtained from a 5-megapixel still camera can never be sharper than a 5-megapixel image obtained after down-conversion from an equal quality 10-megapixel still camera. Because of the problem of maintaining a high contrast MTF, broadcasters like the BBC did for a long time consider maintaining standard definition television, but improving its quality by shooting and viewing with many more pixels (though as previously mentioned, such a system, though impressive, does ultimately lack the very fine detail which, though attenuated, enhances the effect of true HD viewing).

Another factor in digital cameras and camcorders is lens resolution. A lens may be said to 'resolve' 1920 horizontal lines, but this does not mean that it does so with full modulation from black to white. The 'modulation transfer function' (just a term for the magnitude of the optical transfer function with phase ignored) gives the true measure of lens performance and is represented by a graph of amplitude against spatial frequency.

Lens aperture diffraction also limits MTF. Whilst reducing the aperture of a lens usually reduces aberrations and hence improves the flatness of the MTF, there is an optimum aperture for any lens and image sensor size beyond which smaller apertures reduce resolution because of diffraction, which spreads light across the image sensor. This was hardly a problem in the days of plate cameras and even 35 mm film but has become an insurmountable limitation with the very small format sensors used in some digital cameras and especially video cameras. First-generation HD consumer camcorders used 1/4-inch sensors, for which apertures smaller than about f4 begin to limit resolution. Even professional video cameras mostly use 2/3 inch sensors, prohibiting the use of apertures around f16 that would have been considered normal for film formats. Certain cameras (such as the Pentax K10D) feature an "MTF auto-exposure" mode, where the choice of aperture is optimized for maximum sharpness. Typically this means somewhere in the middle of the aperture range.

The trend to large-format DSLRs and improved MTF potential

There has recently been a shift towards the use of large image format digital single-lens reflex cameras driven by the need for low-light sensitivity and narrow depth of field effects. This has led to such cameras becoming preferred by some film and television program makers over even professional HD video cameras, because of their 'filmic' potential. In theory, the use of cameras with 16- and 21-megapixel sensors offers the possibility of almost perfect sharpness by downconversion within the camera, with digital filtering to eliminate aliasing. Such cameras produce very impressive results and appear to be leading the way in video production towards large-format downconversion with digital filtering becoming the standard approach to the realization of a flat MTF with true freedom from aliasing.

Due to optical effects, the contrast may be sub-optimal and approaches zero before the Nyquist frequency of the display is reached. The optical contrast reduction can be partially reversed by digitally amplifying spatial frequencies selectively before display or further processing. Although more advanced digital image restoration procedures exist, the Wiener deconvolution algorithm is often used for its simplicity and efficiency. Since this technique multiplies the spatial-spectral components of the image, it also amplifies noise and errors due to e.g. aliasing. It is therefore only effective on good quality recordings with a sufficiently high signal-to-noise ratio. 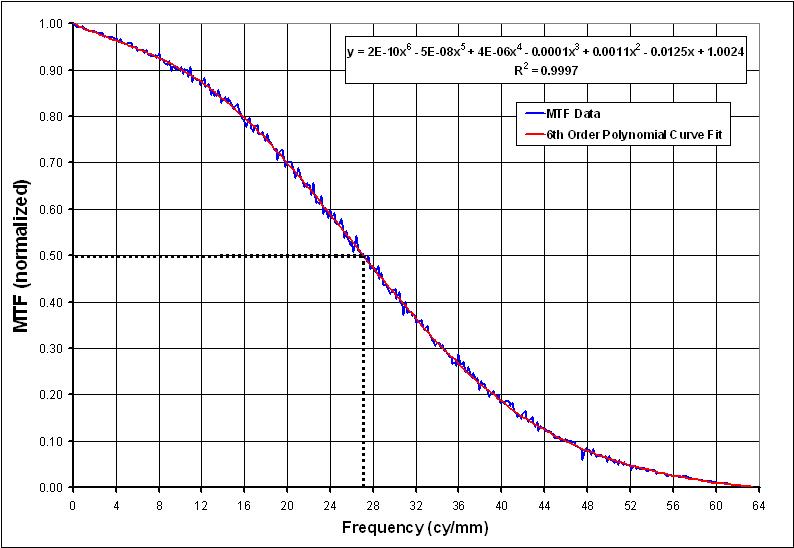 Depth of modulation
also known as
see also
resources
source
Adapted from content published on wikipedia.org
credit
Last modified on May 4, 2021, 4:51 pm
previous
next
Videocide.com is a service provided by Codecide, a company located in Chicago, IL USA.