In a camera, a component designed to control amount of peripheral light going through the lens aperture.

In optics, a diaphragm is a thin opaque structure with an opening (aperture) at its center. The role of the diaphragm is to stop the passage of light, except for the light passing through the aperture. Thus it is also called a stop (an aperture stop, if it limits the brightness of light reaching the focal plane, or a field stop or flare stop for other uses of diaphragms in lenses). The diaphragm is placed in the light path of a lens or objective, and the size of the aperture regulates the amount of light that passes through the lens. The centre of the diaphragm's aperture coincides with the optical axis of the lens system.

Most modern cameras use a type of adjustable diaphragm known as an iris diaphragm, and often referred to simply as an iris.

See the articles on aperture and f-number for the photographic effect and system of quantification of varying the opening in the diaphragm.

A natural optical system that has a diaphragm and an aperture is the human eye. The iris is the diaphragm, and the opening in the iris of the eye (the pupil) is the aperture. An analogous dev in a photographic lens is called an iris diaphragm.

In the early years of photography, a lens could be fitted with one of a set of interchangeable diaphragms , often as brass strips known as Waterhouse stops or Waterhouse diaphragms. The iris diaphragm in most modern still and video cameras is adjusted by movable blades, simulating the iris of the eye.

The diaphragm has two to twenty blades (with most lenses today featuring between five and ten blades), depending on price and quality of the device in which it is used. Straight blades result in polygon shape of the diaphragm opening, while curved blades improve the roundness of the iris opening. In a photograph, the number of blades that the iris diaphragm has can be guessed by counting the number of diffraction spikes converging from a light source or bright reflection. For an odd number of blades, there are twice as many spikes as there are blades.

In case of an even number of blades, the two spikes per blade will overlap each other, so the number of spikes visible will be the number of blades in the diaphragm used. This is most apparent in pictures taken in the dark with small bright spots, for example night cityscapes. Some cameras, such as the Olympus XA or lenses such as the MC Zenitar-ME1, however, use a two-bladed diaphragm with right-angle blades creating a square aperture.

Similarly, out-of-focus points of light (circles of confusion) appear as polygons with the same number of sides as the aperture has blades. If the blurred light is circular, then it can be inferred that the aperture is either round or the image was shot "wide-open" (with the blades recessed into the sides of the lens, allowing the interior edge of the lens barrel to effectively become the iris).

Some lenses utilize specially shaped diaphragms in order to create certain effects. This includes the diffusion discs or sieve aperture of the Rodenstock Tiefenbildner-Imagon, Fuji and Sima soft focus lenses, the sector aperture of Seibold's Dreamagon, or the circular apodization filter in the Minolta/sony Smooth Trans Focus or fujifilm APD lenses.

Some modern automatic point-and-shoot cameras do not have a diaphragm at all, and simulate aperture changes by using an automatic ND filter. Unlike a real diaphragm, this has no effect on depth of field. A real diaphragm when more-closed will cause the depth of field to increase (i.e., cause the background and the subject to both appear more in-focus at the same time) and if the diaphragm is opened up again the depth of field will decrease (i.e., the background and foreground will share less and less of the same focal plane). 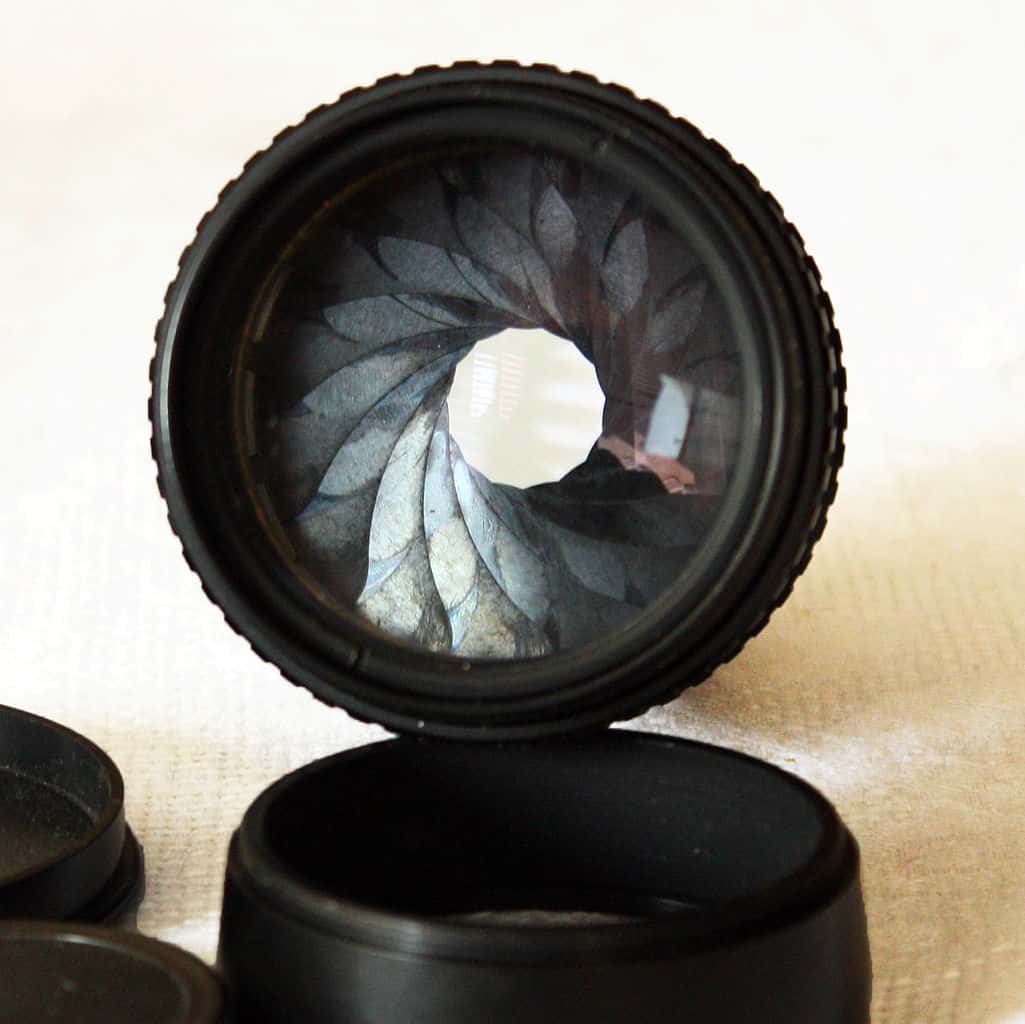