A generic term referring to the computer application or the device used for recording, editing, and producing audio files.

A digital audio workstation (DAW) is an electronic device or application software used for recording, editing and producing audio files. DAWs come in a wide variety of configurations from a single software program on a laptop, to an integrated stand-alone unit, all the way to a highly complex configuration of numerous components controlled by a central computer. Regardless of configuration, modern DAWs have a central interface that allows the user to alter and mix multiple recordings and tracks into a final produced piece.

DAWs are used for the production and recording of music, songs, speech, radio, television, soundtracks, podcasts, sound effects, and nearly any other situation where complex recorded audio is needed.

An integrated DAW consisted of: a control screen, a 48-track digital mixer integrated on hard disk recorder including data storage and audio interface.

DAW can simply refer to the software itself, but traditionally, a computer-based DAW has four basic components: a computer, either a sound card or audio interface, digital audio editor software, and at least one input device for adding or modifying data. This could be as simple as a mouse (if no external instruments are used) or as sophisticated as a piano-style MIDI controller keyboard or automated fader board for mixing track volumes.

The computer acts as a host for the sound card/audio interface, while the software provides the interface and functionality for audio editing. The sound card/external audio interface typically converts analog audio signals into digital form, and digital back to analog audio when playing it back; it may also assist in further processing of the audio. The software controls all related hardware components and provides a user interface to allow for recording, editing, and playback.

Computer-based DAWs have extensive recording, editing, and playback capabilities (some even have video-related features). For example, musically, they can provide a near-infinite increase in additional tracks to record on, polyphony, and virtual synthesizers or sample-based instruments to use for recording music. A DAW with a sampled string section emulator can be used to add string accompaniment "pads" to a pop song. DAWs can also provide a wide variety of effects, such as reverb, to enhance or change the sounds themselves.

Simple smartphone-based DAWs, called Mobile Audio Workstations (MAWs), are used (for example) by journalists for recording and editing on location. Many are sold on app stores such as the iOS App Store or Google Play.

As software systems, DAWs are designed with many user interfaces, but generally, they are based on a multitrack tape recorder metaphor, making it easier for recording engineers and musicians already familiar with using tape recorders to become familiar with the new systems. Therefore, computer-based DAWs tend to have a standard layout that includes transport controls (play, rewind, record, etc.), track controls and a mixer, and a waveform display. Single-track DAWs display only one (mono or stereo form) track at a time. The term "track" is still used with DAWs, even though there is no physical track as there was in the era of tape-based recording.

Multitrack DAWs support operations on multiple tracks at once. Like a mixing console, each track typically has controls that allow the user to adjust the overall volume, equalization, and stereo balance (pan) of the sound on each track. In a traditional recording studio additional rackmount processing gear is physically plugged into the audio signal path to add reverb, compression, etc. However, a DAW can also route in software or use audio plug-ins (for example, a VST plugin) to process the sound on a track.

DAWs are capable of many of the same functions as a traditional tape-based studio setup, and in recent years have almost completely replaced them. Modern advanced recording studios may have multiple types of DAWs in them and it is not uncommon for a sound engineer and/or musician to travel with a portable laptop-based DAW, although interoperability between different DAWs is poor.

Perhaps the most significant feature available from a DAW that is not available in the analog recording is the ability to 'undo' a previous action, using a command similar to that of the "undo" button in the word processing software. Undo makes it much easier to avoid accidentally permanently erasing or recording over a previous recording. If a mistake or unwanted change is made, the undo command is used to conveniently revert the changed data to a previous state. Cut, Copy, Paste, and Undo are familiar and common computer commands and they are usually available in DAWs in some form. More common functions include the modifications of several factors concerning a sound. These include wave shape, pitch, tempo, and filtering.

Commonly DAWs feature some form of automation often performed through "envelopes". Envelopes are procedural line segment-based or curve-based interactive graphs. The lines and curves of the automation graph are joined by or comprise adjustable points. By creating and adjusting multiple points along with a waveform or control events, the user can specify parameters of the output over time (e.g., volume or pan). Automation data may also be directly derived from human gestures recorded by a control surface or controller. MIDI is a common data protocol used for transferring such gestures to the DAW.

MIDI recording, editing, and playback are increasingly incorporated into modern DAWs of all types, as is synchronization with other audio and/or video tools. 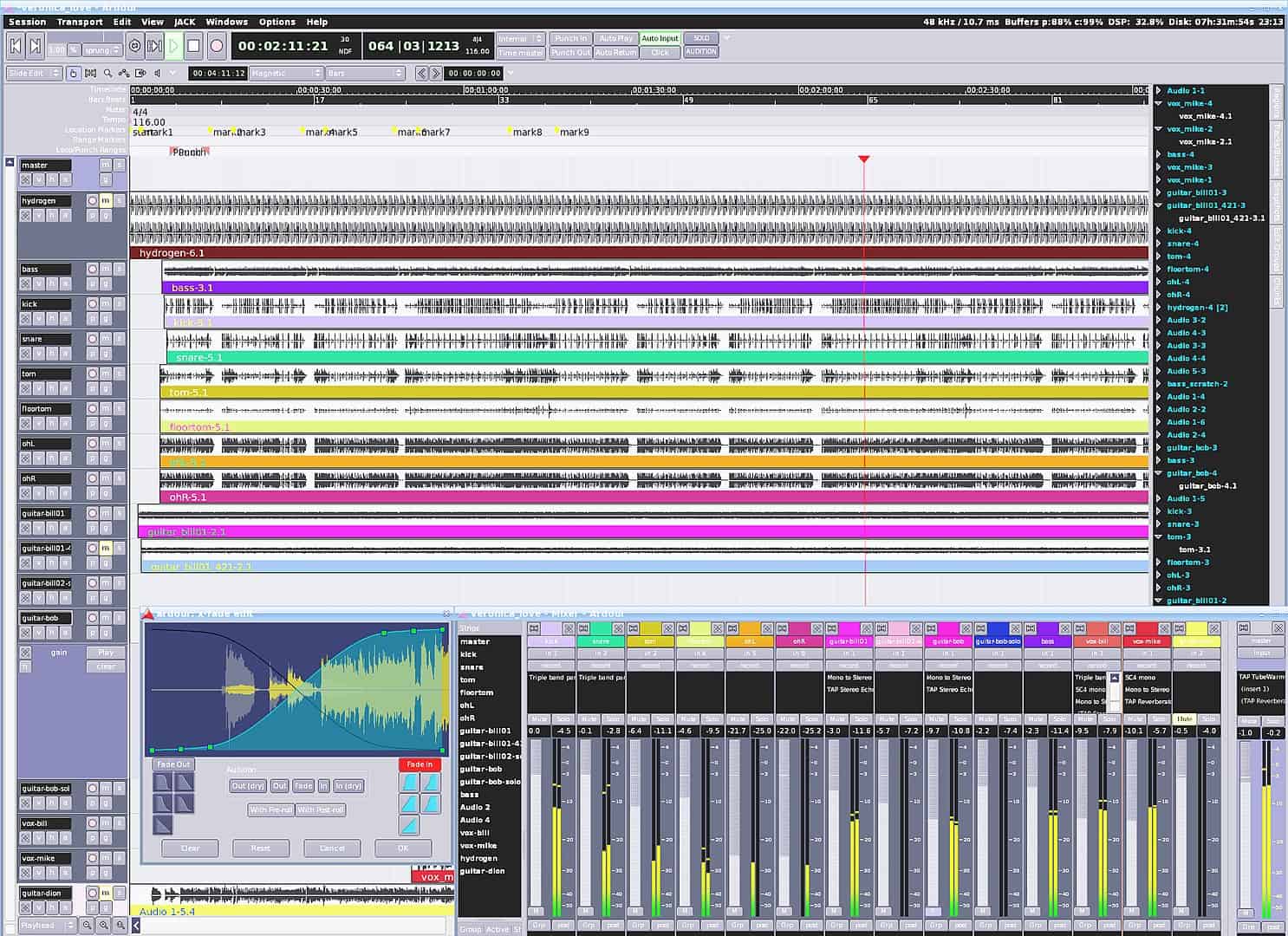