A camera that captures images in digital memory (as opposed to physical film.)

A digital camera or digicam is a camera that captures photographs in digital memory. Most cameras produced today are digital, and while there are still dedicated digital cameras, many more cameras are now being incorporated into mobile devices, portable touchscreen computers, which can, among many other purposes, use their cameras to initiate live video-telephony and directly edit and upload imagery to others. However, high-end, high-definition dedicated cameras are still commonly used by professionals.

Digital and movie cameras share an optical system, typically using a lens with a variable diaphragm to focus light onto an image pickup device. The diaphragm and shutter admit the correct amount of light to the image, just as with film but the image pickup device is electronic rather than chemical. However, unlike film cameras, digital cameras can display images on a screen immediately after being recorded, and store and delete images from memory. Many digital cameras can also record moving videos with sound. Some digital cameras can crop and stitch pictures and perform another elementary image editing.

The basis for digital camera image sensors is metal–oxide–semiconductor (MOS) technology, which originates from the invention of the MOSFET (MOS field-effect transistor) by Mohamed M. Atalla and Dawon Kahng at Bell Labs in 1959. This led to the development of digital semiconductor image sensors, including the charge-coupled device (CCD) and later the CMOS sensor. The first semiconductor image sensor was the charge-coupled device, invented by Willard S. Boyle and George E. Smith at Bell Labs in 1969, based on MOS capacitor technology. The NMOS active-pixel sensor was later invented by Tsutomu Nakamura's team at Olympus in 1985, which led to the development of the CMOS active-pixel sensor (CMOS sensor) by Eric Fossum's team at the NASA Jet Propulsion Laboratory in 1993.

In the 1960s, Eugene F. Lally of the Jet Propulsion Laboratory was thinking about how to use a mosaic photosensor to capture digital images. His idea was to take pictures of the planets and stars while traveling through space to give information about the astronauts' position. As with Texas Instruments employee Willis Adcock's film-less camera (US patent 4,057,830) in 1972, the technology had yet to catch up with the concept.

The Cromemco Cyclops was an all-digital camera introduced as a commercial product in 1975. Its design was published as a hobbyist construction project in the February 1975 issue of Popular Electronics magazine. It used a 32×32 metal-oxide-semiconductor (MOS) image sensor, which was a modified MOS dynamic RAM (DRAM) memory chip.

Steven Sasson, an engineer at Eastman Kodak, invented and built the self-contained electronic camera that used a charge-coupled device (CCD) image sensor in 1975. Around the same time, Fujifilm began developing CCD technology in the 1970s. Early uses were mainly military and scientific; followed by medical and news applications.

Practical digital cameras were enabled by advances in data compression, due to the impractically high memory and bandwidth requirements of uncompressed images and video. The most important compression algorithm is the discrete cosine transform (DCT), a lossy compression technique that was first proposed by Nasir Ahmed while he was working at the University of Texas in 1972. Practical digital cameras were enabled by DCT-based compression standards, including the H.26x and MPEG video coding standards introduced from 1988 onwards, and the JPEG image compression standard introduced in 1992.

Nikon was interested in digital photography since the mid-1980s. In 1986, while presenting to Photokina, Nikon introduced an operational prototype of the first SLR-type digital camera (Still Video Camera), manufactured by Panasonic. The Nikon SVC was built around a sensor 2/3 " charge-coupled device of 300,000 pixels. Storage media, a magnetic floppy inside the camera allows recording 25 or 50 B&W images, depending of the definition. In 1988, Nikon released the first commercial digital single-lens reflex camera (DSLR camera), the QV-1000C.

The first commercial camera phone was the Kyocera Visual Phone VP-210, released in Japan in May 1999. It was called a "mobile videophone" at the time and had a 110,000-pixel front-facing camera. It stored up to 20 JPEG digital images, which could be sent over e-mail, or the phone could send up to two images per second over Japan's Personal Handy-phone System (PHS) cellular network. The Samsung SCH-V200, released in South Korea in June 2000, was also one of the first phones with a built-in camera. It had a TFT liquid-crystal display (LCD) and stored up to 20 digital photos at 350,000-pixel resolution. However, it could not send the resulting image over the telephone function but required a computer connection to access photos. The first mass-market camera phone was the J-SH04, a Sharp J-Phone model sold in Japan in November 2000. It could instantly transmit pictures via cell phone telecommunication. By the mid-2000s, higher-end cell phones had an integrated digital camera. By the beginning of the 2010s, almost all smartphones had an integrated digital camera. 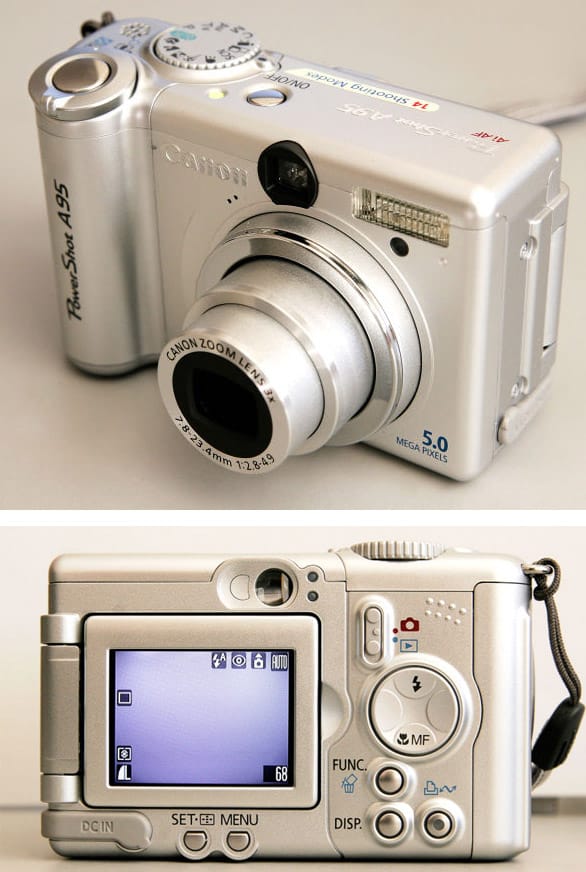