D-Cinema
The use of digital technology to distribute or project movies.

Digital cinema refers to the use of digital technology to distribute or project movies. Digital cinema has been an alternative to film reels for about 15 years, and in the past few years has become more popular. Whereas film reels had to be shipped to movie theaters, a digital movie can be distributed to cinemas in several ways: over the Internet or satellite links, or by sending hard drives or optical discs such as Blu-ray discs.

Digital movies are screened using a digital projector instead of a traditional film projector. Digital cinema is distinct from regular high-definition television and does not necessarily use the same aspect ratios or frame rates. When movies are projected digitally, the resolution is represented by the horizontal pixel count, usually 2K or 4K. As digital-cinema technology improved in the early 2010s, most theaters across the world converted to digital video projection.

It is a modification of the discrete cosine transform, which was first proposed in 1972 by Nasir Ahmed. An audio format was adapted from the DCT algorithm by J.P. Princen, A.W. Johnson, and Alan B. Bradley in 1987 at the University of Surrey. Dolby Laboratories adapted the MDCT algorithm along with perceptual coding principles and developed the AC-3 format for cinema needs. In the 1990s, cinema typically combined analog video with digital audio.

In the past, transporting content between remote locations was slow and had limited capacity. Not until the late 1990s could feature-length films be sent over the "wire" (the Internet or dedicated fiber links).

In October 1998, the first movie shot, edited, and distributed digitally was publicly demonstrated. The Last Broadcast, a horror movie, was released and shown in five theaters across the United States. 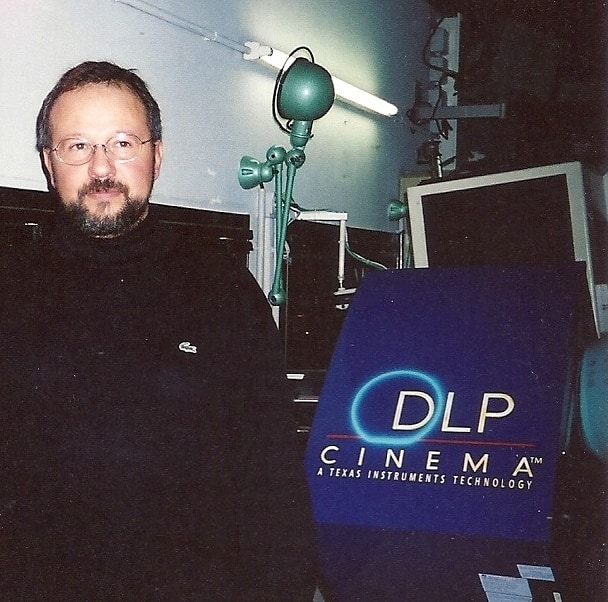