A family of technologies used to transmit digital data over copper telephone lines.

DSL service can be delivered simultaneously with wired telephone service on the same telephone line since DSL uses higher frequency bands for data. On the customer premises, a DSL filter on each non-DSL outlet blocks any high-frequency interference to enable simultaneous use of the voice and DSL services.

The bit rate of consumer DSL services typically ranges from 256 kbit/s to over 100 Mbit/s in the direction to the customer (downstream), depending on DSL technology, line conditions, and service-level implementation. Bit rates of 1 Gbit/s have been reached.

In ADSL, the data throughput in the upstream direction (the direction to the service provider) is lower, hence the designation of asymmetric service. In symmetric digital subscriber line (SDSL) services, the downstream and upstream data rates are equal. Researchers at Bell Labs have reached speeds over 1 Gbit/s for symmetrical broadband access services using traditional copper telephone lines, though such speeds have not yet been deployed elsewhere.

It was originally thought that it was not possible to operate a conventional phone line beyond low-speed limits (typically under 9600 bit/s). In the 1950s, ordinary twisted-pair telephone cable often carried four megahertz (MHz) television signals between studios, suggesting that such lines would allow transmitting many megabits per second. One such circuit in the United Kingdom ran some 10 miles (16 km) between the BBC studios in Newcastle-upon-Tyne and the Pontop Pike transmitting station. However, these cables had other impairments besides Gaussian noise, preventing such rates from becoming practical in the field. The 1980s saw the development of techniques for broadband communications that allowed the limit to be greatly extended. A patent was filed in 1979 for the use of existing telephone wires for both telephones and data terminals that were connected to a remote computer via a digital data carrier system.

Joseph W. Lechleider's contribution to DSL was his insight that an asymmetric arrangement offered more than double the bandwidth capacity of symmetric DSL. This allowed Internet service providers to offer efficient service to consumers, who benefited greatly from the ability to download large amounts of data but rarely needed to upload comparable amounts. ADSL supports two modes of transport: fast channel and interleaved channel. Fast channel is preferred for streaming multimedia, where an occasional dropped bit is acceptable, but lags are less so. Interleaved channel works better for file transfers, where the delivered data must be error-free but latency (time delay) incurred by the retransmission of error-containing packets is acceptable.

Older ADSL standards delivered 8 Mbit/s to the customer over about 2 km (1.2 mi) of unshielded twisted-pair copper wire. Newer variants improved these rates. Distances greater than 2 km (1.2 mi) significantly reduce the bandwidth usable on the wires, thus reducing the data rate. But ADSL loop extenders increase these distances by repeating the signal, allowing the LEC to deliver DSL speeds to any distance.

Until the late 1990s, the cost of digital signal processors for DSL was prohibitive. All types of DSL employ highly complex digital signal processing algorithms to overcome the inherent limitations of the existing twisted pair wires. Due to the advancements of very-large-scale integration (VLSI) technology, the cost of the equipment associated with a DSL deployment lowered significantly. The two main pieces of equipment are a digital subscriber line access multiplexer (DSLAM) at one end and a DSL modem at the other end.

A DSL connection can be deployed over existing cable. Such deployment, even including equipment, is much cheaper than installing a new, high-bandwidth fiber-optic cable over the same route and distance. This is true both for ADSL and SDSL variations. The commercial success of DSL and similar technologies largely reflects the advances made in electronics over the decades that have increased performance and reduced costs even while digging trenches in the ground for new cables (copper or fiber optic) remains expensive.

These advantages made ADSL a better proposition for customers requiring Internet access than metered dial up, while also allowing voice calls to be received at the same time as a data connection. Telephone companies were also under pressure to move to ADSL owing to competition from cable companies, which use DOCSIS cable modem technology to achieve similar speeds. Demand for high bandwidth applications, such as video and file sharing, also contributed to the popularity of ADSL technology.

Early DSL service required a dedicated dry loop, but when the U.S. Federal Communications Commission (FCC) required incumbent local exchange carriers (ILECs) to lease their lines to competing DSL service providers, shared-line DSL became available. Also known as DSL over unbundled network element, this unbundling of services allows a single subscriber to receive two separate services from two separate providers on one cable pair. The DSL service provider's equipment is co-located in the same telephone exchange as that of the ILEC supplying the customer's pre-existing voice service. The subscriber's circuit is rewired to interface with hardware supplied by the ILEC which combines a DSL frequency and POTS signals on a single copper pair.

By 2012, some carriers in the United States reported that DSL remote terminals with fiber backhaul were replacing older ADSL systems. 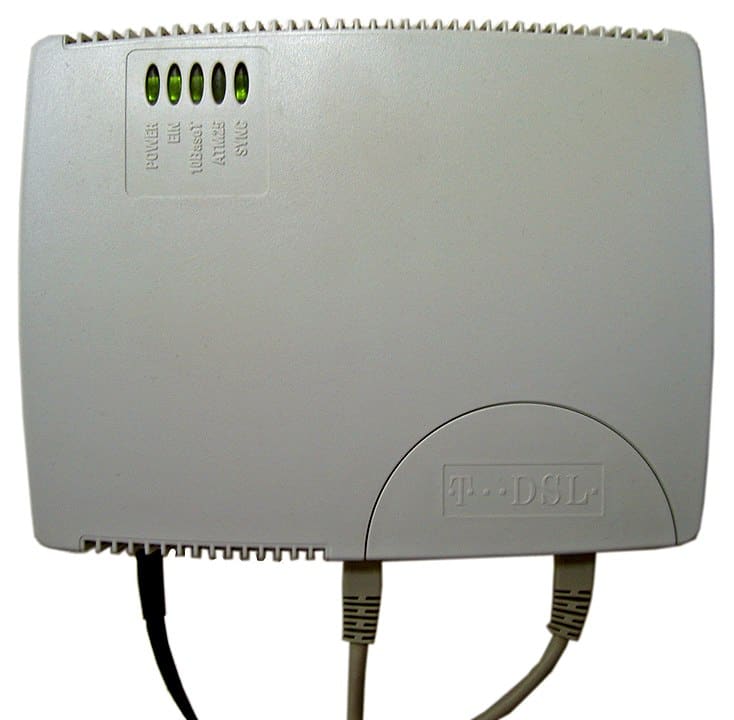