A technology for terrestrial television stations to broadcast television content in a digital format via radio waves.

Digital terrestrial television is a technology for terrestrial television in which land-based (terrestrial) television stations broadcast television content by radio waves to televisions in consumers' residences in a digital format. DTTV is a major technological advance over the previous analog television and has largely replaced analog which had been in common use since the middle of the 20th century. Test broadcasts began in 1998 with the changeover to DTTV (aka Analog Switchoff (ASO) or Digital Switchover (DSO)) beginning in 2006 and is now complete in many countries. The advantages of digital terrestrial television are similar to those obtained by digitizing platforms such as cable TV, satellite, and telecommunications: more efficient use of limited radio spectrum bandwidth, provision of more television channels than analog, better quality images, and potentially lower operating costs for broadcasters (after the initial upgrade costs).

DTT is transmitted using radio frequencies through terrestrial space in the same way as the former analog television systems, with the primary difference being the use of multiplex transmitters to allow reception of multiple services (TV, radio stations, or data) on a single frequency (such as a UHF or VHF channel).

The amount of data that can be transmitted (and therefore the number of channels) is directly affected by channel capacity and the modulation method of the transmission.

North America and South Korea use the ATSC standard with 8VSB modulation, which has similar characteristics to the vestigial sideband modulation used for analog television. This provides considerably more immunity to interference, but is not immune to multipath distortion and also does not provide for single-frequency network operation (which is in any case not a requirement in the United States).

The modulation method in DVB-T is COFDM with either 64 or 16-state Quadrature Amplitude Modulation (QAM). In general, 64QAM is capable of transmitting a greater bit rate but is more susceptible to interference. 16 and 64QAM constellations can be combined in a single multiplex, providing a controllable degradation for more important program streams. This is called hierarchical modulation. DVB-T (and even more so DVB-T2) are tolerant of multipath distortion and are designed to work in single-frequency networks.

DTTV is received either via a digital set-top box (STB), TV gateway or more usually now an integrated tuner included with television sets, that decodes the signal received via a standard television antenna. These devices often now include digital video recorder (DVR) functionality. However, due to frequency planning issues, an aerial capable of receiving a different channel group (usually a wideband) may be required if the DTTV multiplexes lie outside the reception capabilities of the originally installed aerial. This is quite common in the UK; see external links.

Indoor aerials are even more likely to be affected by these issues and possibly need replacing. 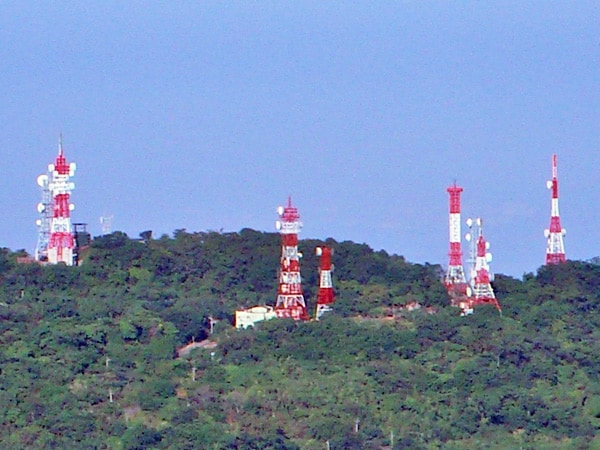