An international connector standard for both audio and video signals; common in Europe.

A DIN connector is an electrical connector that was originally standardized in the early 1970s by the Deutsches Institut für Normung (DIN), the German national standards organization. There are DIN standards for a large number of different connectors, therefore the term "DIN connector" alone does not unambiguously identify any particular type of connector unless the document number of the relevant DIN standard is added (e.g., "DIN 45322 connector"). Some DIN connector standards are:

In the context of consumer electronics, the term "DIN connector" commonly refers to a member of a family of circular connectors that were initially standardized by DIN for analog audio signals. Some of these connectors have also been used in analog video applications, for power connections, and for digital interfaces such as MIDI (DIN 41524) or the IBM AT computer keyboard (DIN 41524, later PS/2 connectors for keyboard and mouse are Mini-DIN connectors). The original DIN standards for these connectors are no longer in print and have been replaced with the equivalent international standard IEC 60130-9.

While DIN connectors appear superficially similar to the professional XLR connectors, they are not compatible.

The 3/180° and 5/180° connectors were originally standardized and widely used in European countries for interconnecting analog audio equipment. For example, a stereo tape recorder could connect to a stereo amplifier using the five pins for the four signal connections plus ground. The connectors on the cord are connected pin for pin, (pin 1 to pin 1, etc.). Pins on male connectors are numbered (from right to left, viewed from outside of the connector, with the 5 pins upwards, and facing them): 1–4–2–5–3. Holes on female connectors are also numbered 1-4-2-5-3, but from left to right (facing the holes). A four-conductor cord wired in this way is sometimes called a DIN cord, a DIN lead or a DIN cable. For mono interconnections, the 3/180° plugs are sufficient. When a mono plug is inserted into a stereo socket, it mates with the left channel. This interface was rare in the U.S. market, and has progressively disappeared on new equipment, both in Germany and worldwide, since the 1980s, in favour of RCA connectors.

The 5/180° connectors are commonly used for:

Analogue theatrical lighting control (pre-dating the more recent digital control protocols such as DMX) commonly used the 8-pin (45°) DIN connector, six of the pins being 0-10V control signals for six separate dimmer circuits, and the other two a 0V reference and a DC source for powering simple circuitry in rudimentary lighting desks. Pinouts vary between manufacturers: Zero 88, Anytronics, Lightprocessor and Strand have the control signals on pins 1-6, 0V on pin 8 and power on pin 7 and Pulsar and Clay Paky have power on pin 1, 0V on pin 2 and channel outputs on pins 3 to 8. The polarity of the power supply and control signals relative to ground also varies, with Strand having negative voltages but most other brands having positive voltages.

In the Soviet Union, 3-pin and 5-pin DIN connectors named ОНЦ-ВГ (Latin: ONC-VG), could be seen on many pieces of equipment, as well as factory-made audio equipment. Radio amateurs and small cooperatives quickly discovered these reliable connectors and began to put them into almost every low frequency signal device, often with non-standard pin usage. Versions other than 3 or 5-pin were very rare in the USSR and very hard to buy. 4-pin DIN connectors, for example, were never seen on any device or in stores. 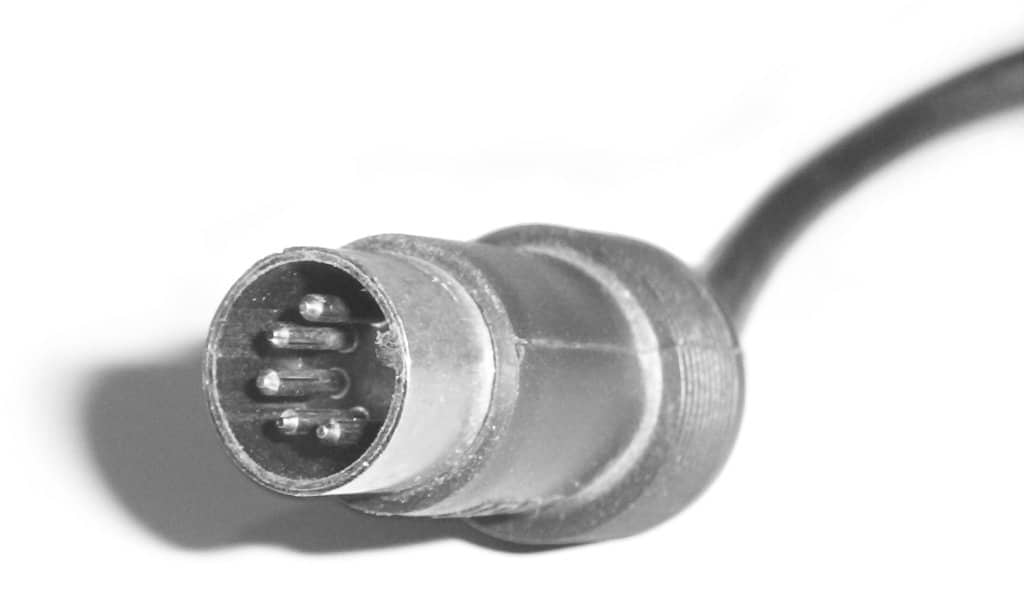