Distortion is the alteration of the original shape (or other characteristic) of something. In communications and electronics it means the alteration of the waveform of an information-bearing signal, such as an audio signal representing sound or a video signal representing images, in an electronic device or communication channel.

Distortion is usually unwanted, and so engineers strive to eliminate or minimize it. In some situations, however, distortion may be desirable. For example, in FM broadcasting and noise reduction systems like the Dolby system, an audio signal is deliberately distorted in ways that emphasize aspects of the signal that are subject to electrical noise, then it is symmetrically "undistorted" after passing through a noisy communication channel, reducing the noise in the signal. Distortion is also used as a musical effect, particularly with electric guitars.

In this context, distortion refers to any kind of deformation of an output waveform compared to its input, usually clipping, harmonic distortion, or intermodulation distortion (mixing phenomena) caused by non-linear behavior of electronic components and power supply limitations. Terms for specific types of nonlinear audio distortion include: crossover distortion, slew-Induced Distortion (SID) and transient intermodulation (TIM).

Distortion in music is often intentionally used as an effect when applied to an electric guitar signal in styles of rock music such as heavy metal and punk rock (see also overdrive and distortion synthesis). Other forms of audio distortion that may be referred to are non-flat frequency response, compression, modulation, aliasing, quantization noise, wow and flutter from analog media such as vinyl records and magnetic tape. The human ear cannot hear phase distortion, except that it may affect the stereo imaging. (See also: Audio system measurements.)

In most fields, distortion is characterized as unwanted change to a signal. 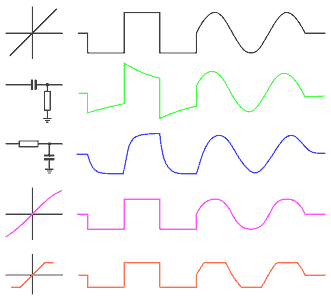