A version of DLP technology developed for digital movie presentations.

DLP Cinema systems have been deployed and tested commercially in theatres since 1999. In June 1999, Star Wars: Episode I – The Phantom Menace was the first movie to be entirely scanned and distributed to theaters. Four theaters installed digital projectors for the movie's release. The same was done for the traditional and computer-animated hybrid film Tarzan that same year. Later that year, Toy Story 2 was the first movie to be entirely created, edited, and distributed digitally, with more theaters installing digital projectors for its release. DLP Cinema was the first commercial digital cinema technology and is the leading digital cinema technology with approximately 85% market share worldwide as of December 2011. Digital cinema has some advantages over film because the film can be subject to color fading, jumping, scratching, and dirt accumulation. Digital cinema allows the movie content to remain of consistent quality over time. Today, most movie content is also captured digitally. The first all-digital live-action feature shot without film was the 2002 release, Star Wars

DLP Cinema does not manufacture the end projectors, but rather provides the projection technology and works closely with Barco, Christie Digital, and NEC who make the end projection units. DLP Cinema is available to theatre owners in multiple resolutions depending on the needs of the exhibitor. These include 2K – for most theatre screens, 4K - for large theatre screens, and S2K, which was specifically designed for small theatres, particularly in emerging markets worldwide.

On February 2, 2000, Philippe Binant, technical manager of Digital Cinema Project at Gaumont in France, realized the first digital cinema projection in Europe with the DLP CINEMA technology developed by Texas Instruments. DLP is the current market-share leader in professional digital movie projection, largely because of its high contrast ratio and available resolution as compared to other digital front-projection technologies. As of December 2008, there are over 6,000 DLP-based Digital Cinema Systems installed worldwide. 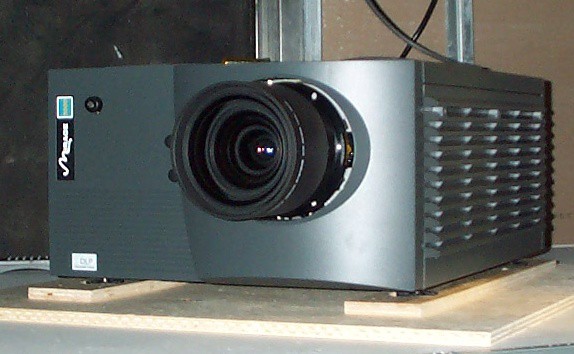