A connector providing two DVI or VGA outputs in a single connector.

DMS-59 (Dual Monitor Solution, 59 pins) is generally used for computer video cards. It provides two Digital Visual Interface (DVI) or Video Graphics Array (VGA) outputs in a single connector. An adapter cable is needed for conversion from DMS-59 (digital) to DVI (digital) or VGA (analog), and different types of adapter cables exist. The connector is four pins high and 15 pins wide, with a single pin missing from the bottom row, in a D-shaped shell, with thumbscrews.

The DMS-59 connector is used by AMD (AMD FireMV), Nvidia and Matrox for video cards sold in Lenovo Thinkcentres, Viglen Genies and Omninos, Dell, and HP computers. DMS-59 connectors also appeared on Sun Computers. Some confusion has been caused by the fact that vendors label cards with DMS-59 as "supports DVI", but the cards have no DVI connectors built-in. Such cards, when equipped with only a VGA connector adapter cable, cannot be connected to a monitor with only a DVI-D input. A DMS-59 to DVI adapter cable needs to be used with such monitors.

The DMS-59 connector is derived from the LFH-60 Molex low-force helix connector, which could be found in some earlier graphics cards. These ports are similar to DMS-59, but have all 60 pins present, whereas DMS-59 has one pin (pin 58) blocked. A connector plug with all 60 pins (such as a Molex 88766-7610 DVI-I splitter) does not fit into a properly keyed DMS-59 socket. 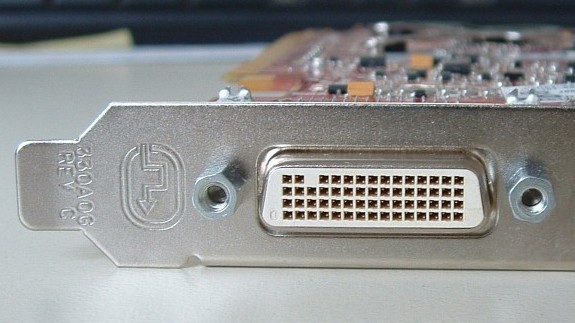