All 5.1 systems use the same speaker channels and configuration, having a front left and right, a center channel, two surround channels (left and right), and the low-frequency effects channel designed for a subwoofer.

A prototype for five-channel surround sound, then dubbed "quintaphonic sound", was used in the 1975 film Tommy.

When digital sound was applied to 35 mm release prints, with Batman Returns in 1992, the 5.1 layouts was adopted. The ability to provide 5.1 sound had been one of the key reasons for using 70 mm for prestige screenings. The provision of 5.1 digital sound on 35 mm significantly reduced the use of the very expensive 70 mm format. Digital sound and the 5.1 format were introduced in 1990, by KODAK and Optical Radiation Corporation, with releases of Days of Thunder and The Doors using the CDS (Cinema Digital Sound) format.

5.1 digital surround, in the forms of Dolby Digital AC3 and DTS, started appearing on several mid 90s Laserdisc releases, with among the earliest being Clear and Present Danger and Jurassic Park (the latter having both AC3 and DTS versions). Many DVD releases have Dolby Digital tracks up to 5.1 channels, due to the implementation of Dolby Digital in the development of the DVD format. In addition, some DVDs have DTS tracks with most being 5.1 channel mixes (a few releases, however, have 6.1 “matrixed” tracks). Blu-ray and digital cinema both have the eight-channel capability which can be used to provide either 5.1 or 7.1 surround sound. 7.1 is an extension of 5.1 that uses four surround zones: two at the sides and two at the back.

A system of digital 5.1 surround sound has also been used in 1987 at the Parisian cabaret the Moulin Rouge, created by French engineer Dominique Bertrand. To achieve such a system in 1985 a dedicated mixing console had to be designed in cooperation with Solid State Logic, based on their 5000 series, and dedicated speakers in cooperation with APG. The console included ABCDEF channels. Respectively: A left, B right, C center, D left rear, E right rear, F bass. The same engineer had already developed a similar 3.1 system in 1973, for use at the official International Summit of Francophone States in Dakar.

The order of channels in a 5.1 file is different across file formats. The order in WAV files is (not complete) Front Left, Front Right, Center, Low-frequency effects, Surround Left, Surround Right.

Regarding music, the main goal of 5.1 surround sound is a proper localization and equability of all acoustic sources for a centered positioned audience. Therefore, ideally, five matched speakers should be used.

For play-back of 5.1 music recommendations of the International Telecommunication Union (ITU) have been released and propose the following configuration (ITU-R BS 775): 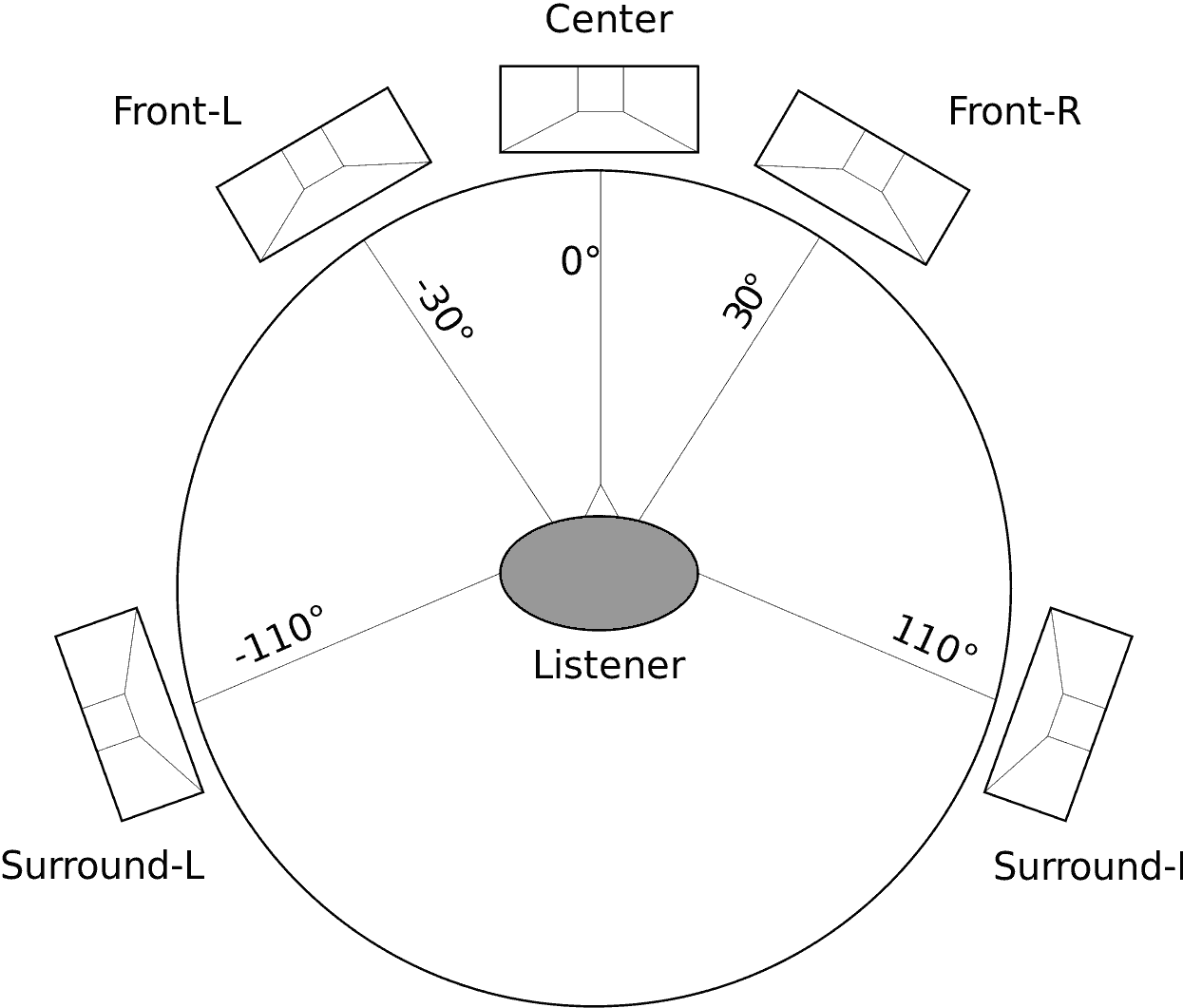 Dolby 5.1
see also
resources
source
Adapted from content published on wikipedia.org
credit
Last modified on November 16, 2020, 4:51 am
previous
next
Videocide.com is a service provided by Codecide, a company located in Chicago, IL USA.