The subtextual drama and actions that are driving and sustaining both the dialogue and the physical actions occurring on-screen.

In a screenplay, dramatic action refers to the subtextual drama and actions that drive the dialogue and physical actions.

In his Poetics, the Greek philosopher Aristotle put forth the idea the play should imitate a single whole action. "A whole is what has a beginning and middle and end" (1450b27). He split the play into two parts: complication and unraveling.

The Roman drama critic Horace advocated a 5-act structure in his Ars Poetica: "Neue minor neu sit quinto productior actu fabula" (lines 189–190) ("A play should not be shorter or longer than five acts").

The fourth-century Roman grammarian Aelius Donatus defined the play as a three-part structure, the protasis, epitasis, and catastrophe.

In 1863, around the time that playwrights like Henrik Ibsen were abandoning the 5-act structure and experimenting with 3 and 4-act plays, the German playwright and novelist Gustav Freytag wrote Die Technik des Dramas, a definitive study of the 5-act dramatic structure, in which he laid out what has come to be known as Freytag's pyramid. Under Freytag's pyramid, the plot of a story consists of five parts:

Many structural principles still in use by modern storytellers were explained by Aristotle in his Poetics. In the part that still exists, he mostly analyzed the tragedy. A part analyzing the comedy is believed to have existed but is now lost.

Aristotle stated that the tragedy should imitate a whole action, which means that the events follow each other by probability or necessity and that the causal chain has a beginning and an end. There is a knot, a central problem that the protagonist must face. The play has two parts: complication and unraveling. During complication, the protagonist finds trouble as the knot is revealed or tied; during unraveling, the knot is resolved.

Two types of scenes are of special interest: the reversal, which throws the action in a new direction, and the recognition, meaning the protagonist has an important revelation. Reversals should happen as a necessary and probable cause of what happened before, which implies that turning points need to be properly set up.

Complications should arise from a flaw in the protagonist. In the tragedy, this flaw will be his undoing.

Freytag derives his five-part model from the conflict of man against man, the hero, and his adversary. The action of the drama and the grouping of characters is therefore in two parts: the hero's own deeds and those of his antagonist, which Freytag variously describes as "play and counter-play" ("Spiel und Gegenspiel" in the original) or "rising and sinking". The greater the rise, the greater the fall of the vanquished hero. These two contrasting parts of the drama must be united by a climax, to which the action rises and from which the action falls away. Either the play or the counter-play can maintain dominance over the first part of the second part; either is allowed. Freytag is indifferent as to which of the contending parties justice favors; in both groups, good and evil, power and weakness, are mingled.

The setting is fixed in a particular place and time, the mood is set, and the characters are introduced. A backstory may be alluded to. Exposition can be conveyed through dialogues, flashbacks, characters' asides, background details, in-universe media, or the narrator telling a back-story.

An exciting force or inciting event begins immediately after the exposition (introduction), building the rising action in one or several stages toward the point of greatest interest. These events are generally the most important parts of the story since the entire plot depends on them to set up the climax and ultimately the satisfactory resolution of the story itself.

During the falling action, the hostility of the counter-party beats upon the soul of the hero. Freytag lays out two rules for this stage: the number of characters be limited as much as possible, and the number of scenes through which the hero falls should be fewer than in the rising movement. The falling action may contain a moment of final suspense: Although the catastrophe must be foreshadowed so as not to appear as a non sequitur, there could be for the doomed hero a prospect of relief, where the final outcome is in doubt.

The catastrophe ("Katastrophe" in the original) is where the hero meets his logical destruction. Freytag warns the writer not to spare the life of the hero. More generally, the final result of a work's main plot has been known in English since 1705 as the denouement (UK: /deɪˈnuːmɒ̃, dɪ-/, US: /ˌdeɪnuːˈmɒ̃/;). It comprises events from the end of the falling action to the actual ending scene of the drama or narrative. Conflicts are resolved, creating normality for the characters and a sense of catharsis, or release of tension and anxiety, for the reader. Etymologically, the French word dénouement (French: ) is derived from the word dénouer, "to untie", from nodus, Latin for "knot." It is the unraveling or untying of the complexities of a plot.

The comedy ends with a denouement (a conclusion), in which the protagonist is better off than at the story's outset. The tragedy ends with a catastrophe, in which the protagonist is worse off than at the beginning of the narrative. An exemplary of a comic denouement is the final scene of Shakespeare's comedy As You Like It, in which couples marry, an evildoer repents, two disguised characters are revealed for all to see, and a ruler is restored to power. In Shakespeare's tragedies, the denouement is usually the death of one or more characters.

“This U-shaped pattern…recurs in literature as the standard shape of comedy, where a series of misfortunes and misunderstandings brings the action to a threateningly low point, after which some fortunate twist in the plot sends the conclusion up to a happy ending.” A U-shaped plot begins at the top of the U with a state of equilibrium, a state of prosperity or happiness, which is disrupted by disequilibrium or disaster. At the bottom of the U, the direction is reversed by a fortunate twist, divine deliverance, an awakening of the protagonist to his or her tragic circumstances, or some other action or event that results in an upward turn of the plot. Aristotle referred to the reversal of direction as peripeteia or peripety, which depends frequently on a recognition or discovery by the protagonist. Aristotle called this discovery an anagnorisis—a change from “ignorance to knowledge” involving “matters which bear on prosperity or adversity”. The protagonist recognizes something of great importance that was previously hidden or unrecognized. The reversal occurs at the bottom of the U and moves the plot upward to a new stable condition marked by prosperity, success, or happiness. At the top of the U, equilibrium is restored.

A classic example of a U-shaped plot in the Bible is the Parable of the Prodigal Son in Luke 15:11-24. The parable opens at the top of the U with a stable condition but turns downward after the son asks the father for his inheritance and sets out for a “distant country” (Luke 15:13). Disaster strikes: the son squanders his inheritance and famine in the land increases his dissolution (Luke 15:13-16). This is the bottom of the U. A recognition scene (Luke 15:17) and a peripety moves the plot upward to its denouement, a new stable condition at the top of the U.

An example of an inverted U-shaped pattern is found in the parable of the Ten Virgins in Matthew 25:1-13. The rising action is the preparation for the coming of the bridegroom by the ten virgins, but a crisis occurs when the bridegroom, who was delayed for the wedding, appears unexpectedly at midnight. This is the turning point, the reversal or peripety, that leads to disaster for the five bridesmaids that were not prepared for the bridegroom’s delay. The recognition (anagnorisis) of their hamartia or their tragic flaw is apparent to the reader but occurs too late for the foolish bridesmaids to avert disaster (cf. Matthew 25:12).

Contemporary dramas increasingly use the fall to increase the relative height of the climax and dramatic impact (melodrama). The protagonist reaches up but falls and succumbs to doubts, fears, and limitations. The negative climax occurs when the protagonist has an epiphany and encounters the greatest fear possible or loses something important, giving the protagonist the courage to take on another obstacle. This confrontation becomes a classic climax. 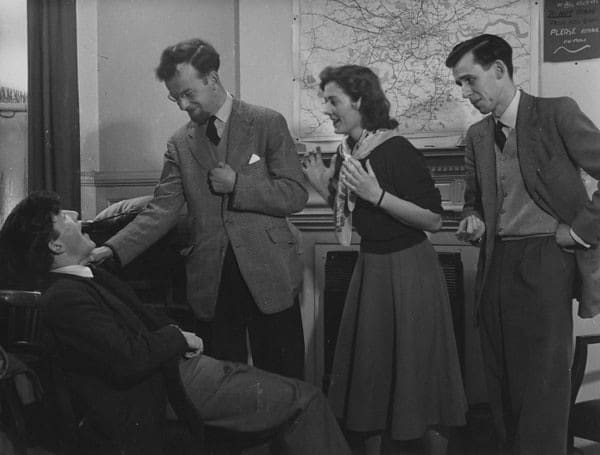