A camera-equipped aircraft without a human pilot on board.

A drone is an unmanned aircraft. This is an aircraft without a human pilot on board. It is a component of an unmanned aircraft system (UAS) which includes communication with the UAV and a ground-based controller. The flight of UAVs may operate under remote control by a human operator or fully autonomous aircraft that does not allow human intervention.

Compared to crewed aircraft, UAVs were originally used for missions too "dull, dirty, or dangerous" for humans. While drones originated mostly in military applications, their use is rapidly finding many more applications including aerial photography, product deliveries, agriculture, policing and surveillance, infrastructure inspections, science, smuggling, and drone racing.

The term drone, more widely used by the public, was coined about the early remotely-flown target aircraft used for practice firing of a battleship's guns, and the term was first used with the 1920s Fairey Queen and 1930s de Havilland Queen Bee target aircraft. These two were followed in service by the similarly-named Airspeed Queen Wasp and Miles Queen Martinet, before ultimate replacement by the GAF Jindivik.

The term unmanned aircraft system (UAS) was adopted by the United States Department of Defense (DoD) and the United States Federal Aviation Administration in 2005 according to their Unmanned Aircraft System Roadmap 2005–2030. The International Civil Aviation Organization (ICAO) and the British Civil Aviation Authority adopted this term, also used in the European Union's Single-European-Sky (SES) Air-Traffic-Management (ATM) Research (SESAR Joint Undertaking) roadmap for 2020. This term emphasizes the importance of elements other than the aircraft. It includes elements such as ground control stations, data links, and other support equipment. A similar term is an unmanned-aircraft vehicle system (UAVS), remotely piloted aerial vehicle (RPAV), remotely piloted aircraft system (RPAS). Many similar terms are in use. "Unoccupied" and "uninhabited" are occasionally used as gender-neutral alternatives to "unmanned".

A UAV is defined as a "powered, aerial vehicle that does not carry a human operator, uses aerodynamic forces to provide vehicle lift, can fly autonomously or be piloted remotely, can be expendable or recoverable, and can carry a lethal or nonlethal payload". Therefore, missiles are not considered UAVs because the vehicle itself is a weapon that is not reused, though it is also uncrewed and in some cases remotely guided. That being said, UAV is a term that is commonly applied to military use cases.

As autonomous drones are not piloted by humans, a ground control system, or communications management software, plays a major role in their operations, and thus they are also considered part of a UAS. In addition to the software, autonomous drones also employ a host of advanced technologies that allow them to carry out their missions without human intervention, such as cloud computing, computer vision, artificial intelligence, machine learning, deep learning, and thermal sensors.

In recent years, autonomous drones have begun to transform various commercial industries as they can fly beyond visual line of sight (BVLOS) while maximizing production, reducing costs and risks, ensuring site safety, security, and regulatory compliance, and protecting the human workforce in times of a pandemic. They can also be used for consumer-related missions like package delivery, as demonstrated by Amazon Prime Air, and critical deliveries of health supplies.

A Drone-in-a-Box (DIB) is an autonomous drone that deploys to carry out a pre-programmed list of missions from and returns to a self-contained landing box that also functions as the drone's charging base.

Under new regulations which came into effect 1 June 2019, the term RPAS (Remotely Piloted Aircraft System) has been adopted by the Canadian Government to mean "a set of configurable elements consisting of a remotely piloted aircraft, its control station, the command and control links and any other system elements required during flight operation".

The relation of UAVs to remote-controlled model aircraft is unclear. UAVs may or may not include model aircraft. Some jurisdictions base their definition on size or weight; however, the US Federal Aviation Administration defines any uncrewed flying craft as a UAV regardless of size. For recreational uses, a drone (as opposed to a UAV) is a model aircraft that has first-person video, autonomous capabilities, or both.

The earliest recorded use of an unmanned aerial vehicle for warfighting occurred in July 1849, serving as a balloon carrier (the precursor to the aircraft carrier) in the first offensive use of airpower in naval aviation. Austrian forces besieging Venice attempted to launch some 200 incendiary balloons at the besieged city. The balloons were launched mainly from the land; however, some were also launched from the Austrian ship SMS Vulcano. At least one bomb fell in the city; however, due to the wind changing after launch, most of the balloons missed their target, and some drifted back over Austrian lines and the launching ship Vulcano.

UAV innovations started in the early 1900s, and originally focused on providing practice targets for training military personnel. UAV development continued during World War I, when the Dayton-Wright Airplane Company invented a pilotless aerial torpedo that would explode at a preset time.

The earliest attempt at a powered UAV was A. M. Low's "Aerial Target" in 1916. Low confirmed that Geoffrey de Havilland’s monoplane was the one that flew under control on 21 March 1917 using his radio system. Other British unmanned developments followed during and after World War I leading to the fleet of over 400 de Havilland 82 Queen Bee aerial targets that went into service in 1935.

Nikola Tesla described a fleet of uncrewed aerial combat vehicles in 1915. These developments also inspired the construction of the Kettering Bug by Charles Kettering from Dayton, Ohio, and the Hewitt-Sperry Automatic Airplane. Initially meant as an uncrewed plane that would carry an explosive payload to a predetermined target. The first scaled remote piloted vehicle was developed by film star and model-airplane enthusiast Reginald Denny in 1935. In 1940 Denny started the Radioplane Company and more models emerged during World War II – used both to train antiaircraft gunners and to fly attack missions. Nazi Germany produced and used various UAV aircraft during the war, as the Argus As 292 and the V-1 flying bomb with a jet engine. After World War II the development continued in vehicles such as the American JB-4 (using television/radio-command guidance), the Australian GAF Jindivik, and Teledyne Ryan Firebee I of 1951, while companies like Beechcraft offered their Model 1001 for the U.S. Navy in 1955. Nevertheless, they were little more than remote-controlled airplanes until the Vietnam War.

In 1959, the U.S. Air Force, concerned about losing pilots over hostile territory, began planning for the use of uncrewed aircraft. Planning intensified after the Soviet Union shot down a U-2 in 1960. Within days, a highly classified UAV program started under the code name of "Red Wagon". The August 1964 clash in the Tonkin Gulf between naval units of the U.S. and North Vietnamese Navy initiated America's highly classified UAVs (Ryan Model 147, Ryan AQM-91 Firefly, Lockheed D-21) into their first combat missions of the Vietnam War. When the Chinese government showed photographs of downed U.S. UAVs via Wide World Photos, the official U.S. response was "no comment".

During the War of Attrition (1967–1970) the first tactical UAVs installed with reconnaissance cameras were first tested by the Israeli intelligence, successfully bringing photos from across the Suez canal. This was the first time that tactical UAVs that could be launched and landed on any short runway (unlike the heavier jet-based UAVs) were developed and tested in battle.

In the 1973 Yom Kippur War, Israel used UAVs as decoys to spur opposing forces into wasting expensive anti-aircraft missiles. After the 1973 Yom Kippur war, a few key people from the team that developed this early UAV joined a small startup company that aimed to develop UAVs into a commercial product, eventually purchased by Tadiran and leading to the development of the first Israeli UAV.

In 1973, the U.S. military officially confirmed that they had been using UAVs in Southeast Asia (Vietnam). Over 5,000 U.S. airmen had been killed and over 1,000 more were missing or captured. The USAF 100th Strategic Reconnaissance Wing flew about 3,435 UAV missions during the war at a cost of about 554 UAVs lost to all causes. In the words of USAF General George S. Brown, Commander, Air Force Systems Command, in 1972, "The only reason we need (UAVs) is that we don't want to needlessly expend the man in the cockpit." Later that year, General John C. Meyer, Commander in Chief, Strategic Air Command, stated, "we let the drone do the high-risk flying ... the loss rate is high, but we are willing to risk more of them ...they save lives!"

During the 1973 Yom Kippur War, Soviet-supplied surface-to-air missile batteries in Egypt and Syria caused heavy damage to Israeli fighter jets. As a result, Israel developed the IAI Scout as the first UAV with real-time surveillance. The images and radar decoys provided by these UAVs helped Israel to completely neutralize the Syrian air defenses at the start of the 1982 Lebanon War, resulting in no pilots downed. The first time UAVs were used as a proof-of-concept of super-agility post-stall controlled flight in combat-flight simulations involved tailless, stealth technology-based, three-dimensional thrust vectoring flight control, jet-steering UAVs in Israel in 1987.

With the maturing and miniaturization of applicable technologies in the 1980s and 1990s, interest in UAVs grew within the higher echelons of the U.S. military. In the 1990s, the U.S. DoD gave a contract to AAI Corporation along with Israeli company Malat. The U.S. Navy bought the AAI Pioneer UAV that AAI and Malat developed jointly. Many of these UAVs saw service in the 1991 Gulf War. UAVs demonstrated the possibility of cheaper, more capable fighting machines, deployable without risk to aircrews. Initial generations primarily involved surveillance aircraft, but some carried armaments, such as the General Atomics MQ-1 Predator, that launched AGM-114 Hellfire air-to-ground missiles.

As of 2012, the USAF employed 7,494 UAVs – almost one in three USAF aircraft. The Central Intelligence Agency also operated UAVs.

In 2013 at least 50 countries used UAVs. China, Iran, Israel, Pakistan, Turkey, and others designed and built their own varieties. 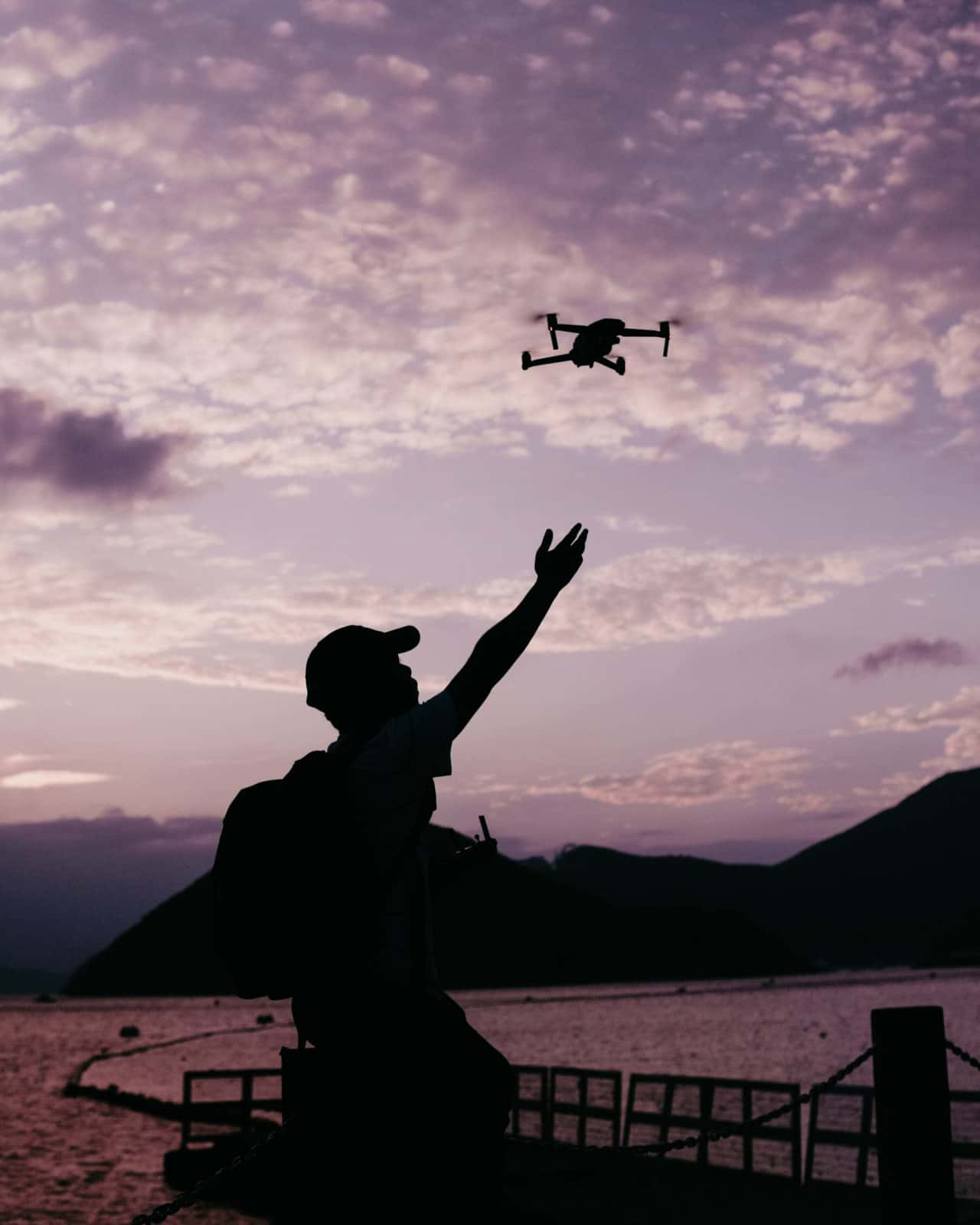