An application that provides an on-screen listing of all programming and content that is available to a viewer.

Electronic programming guides (EPGs) and interactive programming guides (IPGs) are menu-based systems that provide users of television, radio and other media applications with continuously updated menus that display scheduling information for current and upcoming broadcast programming (most commonly, TV listings). Some guides also feature backward scrolling to promote their catch up content. They are commonly known as guides or TV guides.

Non-interactive electronic programming guides (sometimes known as "navigation software") are typically available for television and radio, and consist of a digitally displayed, non-interactive menu of programming scheduling information shown by a cable or satellite television provider to its viewers on a dedicated channel. EPGs are transmitted by specialized video character generation (CG) equipment housed within each such provider's central headend facility. By tuning into an EPG channel, a menu is displayed that lists current and upcoming television shows on all available channels.

A more modern form of the EPG, associated with both television and radio broadcasting, is the interactive programming guide (IPG, though often referred to as EPG). An IPG allows television viewers and radio listeners to navigate scheduling information menus interactively, selecting and discovering programming by time, title, channel or genre using an input device such as a keypad, computer keyboard or television remote control. Its interactive menus are generated entirely within local receiving or display equipment using raw scheduling data sent by individual broadcast stations or centralized scheduling information providers. A typical IPG provides information covering a span of seven or 14 days.

Data used to populate an interactive EPG may be distributed over the Internet, either for a charge or free of charge, and implemented on equipment connected directly or through a computer to the Internet.

Interactive program guides are nearly ubiquitous in most broadcast media today. EPGs can be made available through television (on set-top boxes and all current digital TV receivers), mobile phones (particularly through smartphone apps), and on the Internet. Online TV Guides are becoming more ubiquitous, with over 7 million searches for "TV Guide" being logged each month on Google.

Demand for non-interactive electronic television program guides – television channels displaying listings for currently airing and upcoming programming – has been nearly eliminated by the widespread availability of interactive program guides for television; TV Guide Network, the largest of these services, eventually abandoned its original purpose as a non-interactive EPG service and became a traditional general entertainment cable channel, eventually rebranding as Pop in January 2015. Television-based IPGs provide the same information as EPGs, but faster and often in much more detail. When television IPGs are supported by PVRs, they enable viewers to plan viewing and recording by selecting broadcasts directly from the EPG, rather than programming timers.

The aspect of an IPG most noticed by users is its graphical user interface (GUI), typically a grid or table listing channel names and program titles and times: web and television-based IPG interfaces allow the user to highlight any given listing and call up additional information about it supplied by the EPG provider. Programs on offer from subchannels may also be listed.

Typical IPGs also allow users the option of searching by genre, as well as immediate one-touch access to, or recording of, a selected program. Reminders and parental control functions are also often included. The IPGs within some DirecTV IRDs can control a VCR using an attached infrared emitter that emulates its remote control.

The latest development in IPGs is personalization through a recommendation engine or semantics. Semantics are used to permit interest-based suggestions to one or several viewers on what to watch or record based on past patterns. One such IPG, iFanzy, allows users to customize its appearance.

Standards for delivery of scheduling information to television-based IPGs vary from application to application, and by country. Older television IPGs like Guide Plus+ relied on analog technology (such as the vertical blanking interval of analog television video signals) to distribute listings data to IPG-enabled consumer receiving equipment. In Europe, the European Telecommunications Standards Institute (ETSI) published standard ETS 300 707 to standardize the delivery of IPG data over digital television broadcast signals. Listings data for IPGs integrated into digital terrestrial television and radio receivers of the present day is typically sent within each station's MPEG transport stream, or alongside it in a special data stream. The ATSC standard for digital terrestrial television, for instance, uses tables sent in each station's PSIP. These tables are meant to contain program start times and titles along with additional program descriptive metadata. Current time signals are also included for on-screen display purposes, and they are also used to set timers on recording devices.

Devices embedded within modern digital cable and satellite television receivers, on the other hand, customarily rely upon third-party listings metadata aggregators to provide them with their on-screen listings data. Such companies include Tribune TV Data, Gemstar-TV Guide (now TiVo Corporation), FYI Television, Inc. in the United States and Europe; TV Media in the United States and Canada; Broadcasting Dataservices in Europe and Dayscript in Latin America; and What's On India Media Pvt. Ltd in India, Sri Lanka, Indonesia, the Middle East and Asia.

Some IPG systems built into older set-top boxes designed to receive terrestrial digital signals and television sets with built-in digital tuners may have a lesser degree of interactive features compared to those included in cable, satellite and IPTV converters; technical limitations in these models may prevent users from accessing program listings beyond (at maximum) 16 hours in advance and complete program synopses, and the inability for the IPG to parse synopses for certain programs from the MPEG stream or displaying next-day listings until at or after 12:00 a.m. local time. IPGs built into newer television (including Smart TV), digital terrestrial set-top box and antenna-ready DVR models feature on-screen displays and interactive guide features more comparable to their pay television set-top counterparts, including the ability to display grids and, in the case of DVRs intended for terrestrial use, the ability – with an Internet connection – to access listings and content from over-the-top services.

A growing trend is for manufacturers such as Elgato and Topfield and software developers such as Microsoft in their Windows Media Center to use an Internet connection to acquire data for their built-in IPGs. This enables greater interactivity with the IPG such as media downloads, series recording and programming of the recordings for the IPG remotely; for example, IceTV in Australia enables TiVo-like services to competing DVR/PVR manufacturers and software companies.

In developing IPG software, manufacturers must include functions to address the growing volumes of increasingly complex data associated with programming. This data includes program descriptions, schedules, and parental television ratings, along with flags for technical and access features such as display formats, closed captioning and Descriptive Video Service. They must also include user configuration information such as favorite channel lists, and multimedia content. To meet this need, some set-top box software designs incorporate a "database layer" that utilizes either proprietary functions or a commercial off-the-shelf embedded database system for sorting, storing and retrieving programming data. 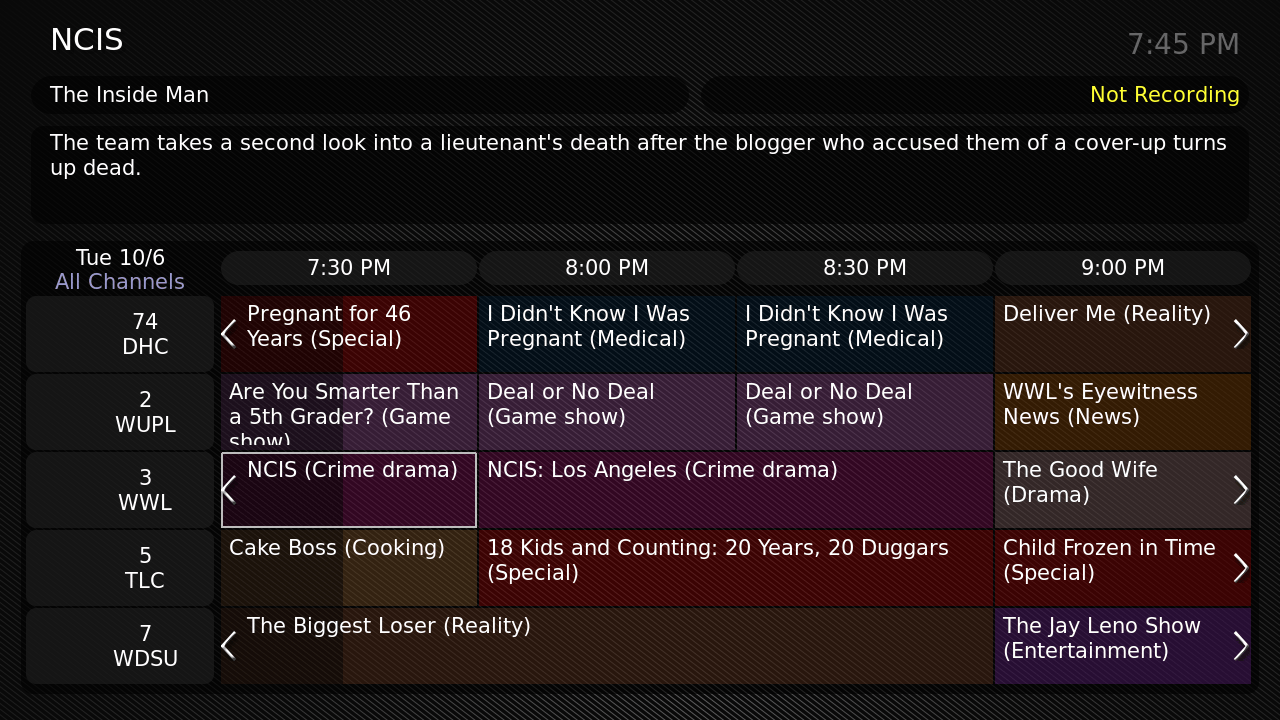