An early motion picture system developed between 1886 and 1894.

The Elektrischen Schnellseher (literally "Electrical Quick-Viewer") or Electrotachyscope was an early motion picture system developed by chronophotographer Ottomar Anschütz between 1886 and 1894. He made at least seven different versions of the machine, including a projector, a peep-box viewer, and several versions with illuminated glass photographs on a rotating wheel viewed on a 12.5cm wide milk-glass screen by up to seven people at the same time.

Before working on chronophotography and motion pictures, Anschütz had already received much acclaim for his instantaneous pictures of flying storks in 1884. In 1885, Anschütz made his first chronophotographs of horses, sponsored by the Prussian Minister of Culture. Initially, he used 12 cameras, later on 24. The quality of his pictures was generally regarded to be much higher than that of pioneer Eadweard Muybridge's chronophotographic series. He continued with studies of horses in motion at the Königlichen Militärreitinstitut (Royal Military Institute) in Hannover during 1886.

From the beginning, Anschütz wanted to reproduce the recorded actions and worked on devices to enable this. In 1886, he built a machine with a 1.5-meter wheel that had 24 9x13cm glass plate photographs attached to its circumference. The pictures were illuminated from behind by a fast succession of electric flashes from a synchronized Geissler tube, while the wheel was hand-cranked to rotate at a speed of circa 30 frames per second. Circa four spectators could watch the images on a 12.5-centimeter wide milk-glass screen in a wall in a small darkened room. Anschütz introduced the first successful model from 19 to 21 March 1887 at the Kultusministerium (Ministry of Culture) in Berlin, receiving much praise from invited colleagues, politicians, and scientists. From 16 July to 26 August 1887, the moving pictures were screened to circa 15.000 paying customers at Stadtbahnbogen 21 in the Ausstellungspark in Berlin. During the next few years, Anschütz demonstrated his electrical Schnellseher at many international exhibitions, fairs, and conventions, visiting Wiesbaden, Frankfurt am Main and Dresden in 1887, Brussels and Florence in 1888 and Kassel, St. Petersburg, New York, Boston, Massachusetts, and Philadelphia in 1889.

In 1888, Anschütz moved to a studio at Charlottenstr. 59 in Berlin, where frequent demonstrations of Schnellsehers took place to at least 1900 (and less frequently until years later).

Early January 1890, Anschütz presented a new type of chronophotography on the glass wheel Schnellseher to emperor Wilhelm I's family: "Sprechende Porträts" (Speaking Portraits). He introduced it publicly on 16 January 1890 at the Photographic Association in Berlin.

At the same 16 January 1890 presentation, Anschütz introduced a much smaller Schnellseher in a cabinet that could be mounted to a wall or otherwise placed at eye-height. By the end of the year, he was negotiating with Siemens & Halske about the commercial manufacture of such machines. In 1891, Siemens & Halske started production of a coin-operated peep-hole Electrotachyscope, of which circa 152 copies were made. This version had 18 to 24 9x12 centimeter celluloid pictures in a 1.25 meter disc. It was demonstrated at the Elektrotechnischen Messe in Frankfurt on 16 May 1891 and exhibited there from 18 July to December, with over 17,000 spectators in the first 2.5 months. Models were demonstrated or installed in Berlin, Warschau, Amsterdam, Brussels, and New York. The machine was licensed to Joe Livingston for Schwarz & Co in New York for the US since 9 September 1891, and to Edgar Cohen for worldwide exploitation (except for Germany and the US) since 19 October 1892 (as Electrical Wonder Company from 12 November 1892 to 2 December 1893). Electrotachyscope automats were installed in popular venues in New York, in Paris, in Boston, at The Crystal Palace in London, at the Berlin Zoo, and in more cities. Circa 34,000 people came to view the motion pictures in July and August 1892 at the Ausstellungspark in Berlin. The Elektrotachyscope was exhibited at the Chicago World's Fair of 1893 as "Greatest Wonder of the World". These machines may have been mistaken for Edison's long-awaited Kinetoscopes that were planned to be installed at the fair, but never seemed to have arrived.

Before Siemens & Halske were involved, Anschütz had also developed an automated 65-centimeter cylindrical Schnellseher. It had six milk-glass screens, each showing a different scene. This Elektro-tachyscope was shown to paying spectators in Vienna in November 1890, and probably in Brussels in 1891.

In 1893, the Edison Manufacturing Company started the wide distribution of their long-awaited Kinetoscope, which had been in slow development since 1888. After initial experiments based on phonograph cylinders, they had shortly worked on a design based on the Schnellseher automat. Their main ambition was to enable longer motion pictures that ideally would reproduce opera performances in combination with the phonograph. The disc format had therefore been abandoned and experiments continued with celluloid film strips. The eventual coin-operated peep-box Kinetoscope automats did show relatively long scenes, but the company was unable to offer a combination with sound.

When the Electrical Wonder Company went under in 1893, it left Anschütz with a large debt with Siemens & Halske for large orders of Schnellsehers. Siemens & Halske started to commercially exhibit the remaining 52 copies themselves as an attempt to lift some of Anschutz's debt and helped him with the development of his new project that aimed to project motion pictures on a large screen.

On 6 November 1894, Anschütz patented a projector with two intermittently rotating large disks and continuous light. On 25, 29 and 30 November 1894, he introduced his new device with two 6 by 8-meter screening in the darkened Grand Auditorium of a Post Office Building in Berlin. From 22 February to 30 March 1895 commercial 1,5-hour program of 40 different scenes was screened for audiences of 300 people at the old Reichstag and received circa 4,000 visitors.

In 1895, other motion picture pioneers entered the market of motion pictures projected on large screens, including Max and Emil Skladanowsky with their Bioscope, and Auguste and Louis Lumière with their cinematograph. Their films were much longer than the Schnellseher picture loops and after 1895 Anschütz's career in motion pictures was diminished to the sales of home model Tachyscopes at his studio. 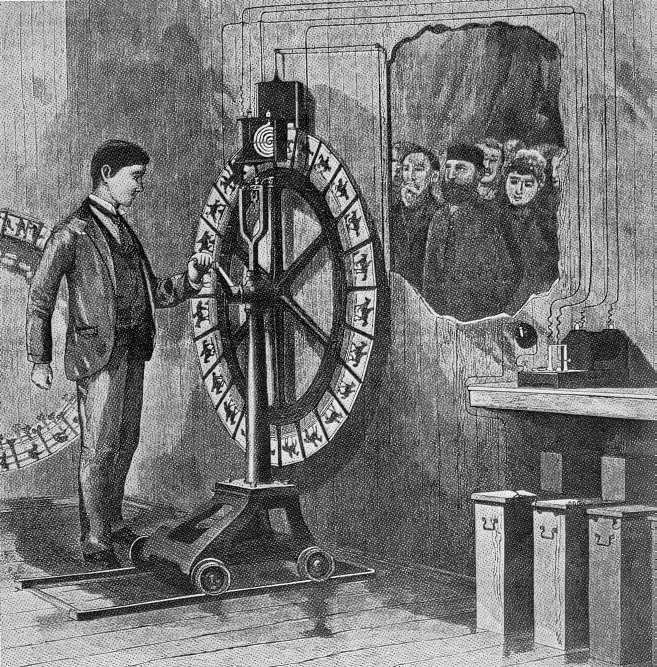 Electrotachyscope
see also
resources
source
Adapted from content published on wikipedia.org
credit
Last modified on December 27, 2020, 9:09 am
previous
next
Videocide.com is a service provided by Codecide, a company located in Chicago, IL USA.