A type of stage lighting instrument, named for the ellipsoidal reflector used to collect and direct the light through a barrel that contains a lens or lens train.

Ellipsoidal reflector light (abbreviated to ERS, or colloquially ellipsoidal or ellipse) is the name for a type of stage lighting instrument, named for the ellipsoidal reflector used to collect and direct the light through a barrel that contains a lens or lens train. The optics of an ERS instrument are roughly similar to those of a 35 mm slide projector. There are many types of ERS that are designed for the myriad applications found in the entertainment industry. ERS instruments come in all shapes and sizes. Each particular model of ERS has its own set of characteristics. Generally, ERS instruments are the most varied and utilized type of stage lighting instrument. ERS may also be referred to as Profile Spotlights (especially in Europe) because the beam can be shaped to the profile of an object. Ellipsoidal reflectors are used for their strong, well-defined light and their versatility. Leko and Source Four are brand names which are often, but inaccurately, used to refer to any sort of ellipsoidal.

Characteristics of a typical ellipsoidal lighting unit include:

The lamps are loaded from the rear (in most cases), and either mounted axially or radially with the base either up or down (the orientation is important when mounting the instrument as using the light upside down will shorten lamp life) at a 45-degree angle or sometimes at a 90-degree angle. The filament of the lamp is at one focal point of the ellipsoidal reflector and the gate with the shutters and gobo are at the other focal point.

Ellipsoidal are supplied with a certain size lens or lenses that determines the field angle, anywhere from five to ninety degrees. The field angle is the angle of the beam of light where it reaches 10% of the intensity of the center of the beam. Most manufacturers now use field angle to indicate the fixture's spread typically in this series (5°, 10°, 19°, 26°, 36°, 50°, 75°, 90°). Older fixtures are described by the width of the lens x focal length of the instrument. For example, a 6x9 ellipsoidal would have a 6" diameter lens and a focal length of 9". 6x9 Instruments have a field angle of approximately 37°. 6x12 instruments have a field angle of approximately 27°. As the field angle narrows, the instrument can be used further from the stage. Variable focus (zoom) instruments with two lenses that move in and out from the lamp housing are also available, allowing the user to manually adjust to the desired focal length within a certain range. Ellipsoidal can be used for any job but their primary function is to illuminate specific proximity. They are the common use for spotlights as they can give a small sharp circle. It has an ellipsoidal reflector behind the lamp to reflect the light in the direction required. They have brackets on the end to attach gels and barn doors. Barn doors do the same as the shutters but give a softer edge. 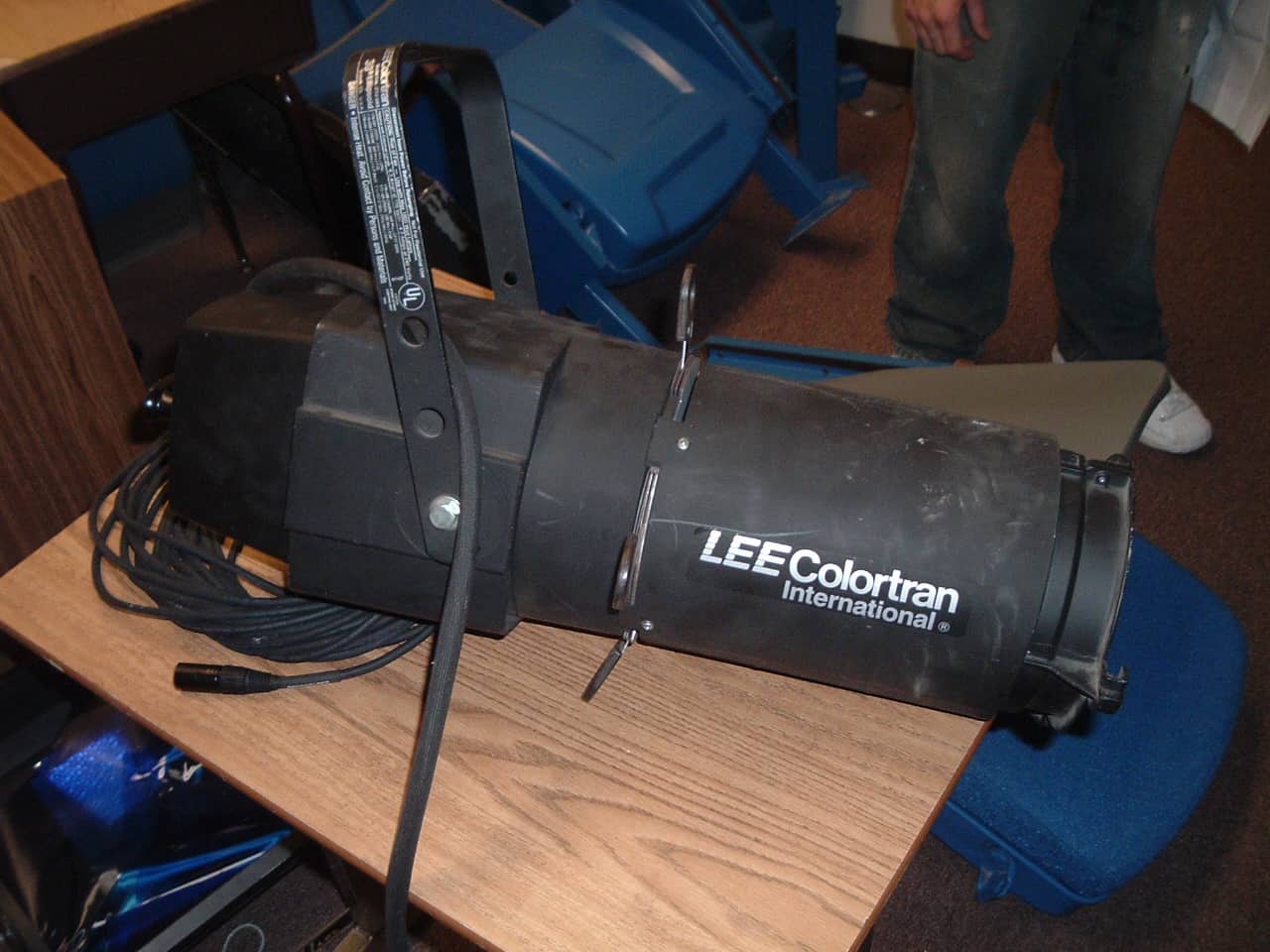