The wire coil that is heated to produce lighting in incandescent and halogen lamps, normally made from tungsten.

The first successful light bulb filaments were made of carbon (from carbonized paper or bamboo). Early carbon filaments had a negative temperature coefficient of resistance—as they got hotter, their electrical resistance decreased. This made the lamp sensitive to fluctuations in the power supply since a small increase of voltage would cause the filament to heat up, reducing its resistance and causing it to draw even more power and heat even further. In the "flashing" process, carbon filaments were heated by current passing through them while in an evacuated vessel containing hydrocarbon vapor (usually gasoline). The carbon deposited on the filament by this treatment improved the uniformity and strength of filaments as well as their efficiency. A metalized or "graphitized" filament was first heated in a high-temperature oven before flashing and lamp assembly. This transformed the carbon into graphite, which further strengthened and smoothed the filament. This also changed the filament to have a positive temperature coefficient, like a metallic conductor and helped stabilize the lamp's power consumption, temperature and light output against minor variations in supply voltage.

In 1902, the Siemens company developed a tantalum lamp filament. These lamps were more efficient than even graphitized carbon filaments and could operate at higher temperatures. Since tantalum metal has a lower resistivity than carbon, the tantalum lamp filament was quite long and required multiple internal supports. The metal filament had the property of gradually shortening in use; the filaments were installed with large loops that tightened in use. This made lamps in use for several hundred hours quite fragile. Metal filaments had the property of breaking and re-welding, though this would usually decrease resistance and shorten the life of the filament. General Electric bought the rights to use tantalum filaments and produced them in the US until 1913.

From 1898 to around 1905, osmium was also used as a lamp filament in Europe, and the metal was so expensive that used broken lamps could be returned for partial credit. It could not be made for 110 V or 220 V so several lamps were wired in series for use on standard voltage circuits.

In 1904, the tungsten filament was developed by Croatian inventors Franjo Hanaman and Alexander Just. Tungsten metal was initially not available in a form that allowed it to be drawn into fine wires. Filaments made from sintered tungsten powder were quite fragile. By 1910, a process was developed by William D. Coolidge at General Electric for the production of a ductile form of tungsten. The process required pressing tungsten powder into bars, then several steps of sintering, swaging, and then wire drawing. It was found that very pure tungsten formed filaments that sagged in use, and that a very small "doping" treatment with potassium, silicon, and aluminum oxides at the level of a few hundred parts per million greatly improved the life and durability of the tungsten filaments.

To improve the efficiency of the lamp, the filament usually consists of multiple coils of coiled fine wire, also known as a 'coiled coil'. Light bulbs using coiled-coil filaments are sometimes referred to as 'double-coil bulbs'. For a 60-watt 120-volt lamp, the uncoiled length of the tungsten filament is usually 580 millimeters (22.8 in), and the filament diameter is 0.046 millimeters (0.0018 in). The advantage of the coiled-coil is that evaporation of the tungsten filament is at the rate of a tungsten cylinder having a diameter equal to that of the coiled-coil. The coiled-coil filament evaporates more slowly than a straight filament of the same surface area and light-emitting power. As a result, the filament can then run hotter, which results in a more efficient light source, while reducing the evaporation so that the filament will last longer than a straight filament at the same temperature.

Electrical filaments are also used in hot cathodes of fluorescent lamps and vacuum tubes as a source of electrons or in vacuum tubes to heat an electron-emitting electrode.

One of the problems of the standard electric light bulb is filament notching due to the evaporation of the filament. Small variations in resistivity along with the filament cause "hot spots" to form at points of higher resistivity; a variation of diameter of only 1% will cause a 25% reduction in service life. These hot spots evaporate faster than the rest of the filament, which increases the resistance at that point—this creates a positive feedback that ends in the familiar tiny gap in an otherwise healthy-looking filament. Irving Langmuir found that an inert gas, instead of vacuum, would retard evaporation. General service incandescent light bulbs over about 25 watts in rating are now filled with a mixture of mostly argon and some nitrogen, or sometimes krypton. Lamps operated on direct current develop random stairstep irregularities on the filament surface which may cut lifespan in half compared to AC operation; different alloys of tungsten and rhenium can be used to counteract the effect.

Since a filament breaking in a gas-filled bulb can form an electric arc, which may spread between the terminals and draw very heavy current, intentionally thin lead-in wires or more elaborate protection devices are therefore often used as fuses built into the light bulb. More nitrogen is used in higher-voltage lamps to reduce the possibility of arcing.

During ordinary operation, the tungsten of the filament evaporates; hotter, more-efficient filaments evaporate faster. Because of this, the lifetime of a filament lamp is a trade-off between efficiency and longevity. The trade-off is typically set to provide a lifetime of several hundred to 2,000 hours for lamps used for general illumination. Theatrical, photographic, and projection lamps may have a useful life of only a few hours, trading life expectancy for high output in a compact form. Long-life general service lamps have lower efficiency but are used where the cost of changing the lamp is high compared to the value of energy used.

If a light bulb envelope leaks, the hot tungsten filament reacts with air, yielding an aerosol of brown tungsten nitride, brown tungsten dioxide, violet-blue tungsten pentoxide, and yellow tungsten trioxide that then deposits on the nearby surfaces or the bulb interior.

In a conventional lamp, the evaporated tungsten eventually condenses on the inner surface of the glass envelope, darkening it. For bulbs that contain a vacuum, the darkening is uniform across the entire surface of the envelope. When a filling of inert gas is used, the evaporated tungsten is carried in the thermal convection currents of the gas, depositing preferentially on the uppermost part of the envelope and blackening just that portion of the envelope. An incandescent lamp that gives 93% or less of its initial light output at 75% of its rated life is regarded as unsatisfactory when tested according to IEC Publication 60064. Light loss is due to filament evaporation and bulb blackening. The study of the problem of bulb blackening led to the discovery of the Edison effect, thermionic emission and invention of the vacuum tube.

A very small amount of water vapor inside a light bulb can significantly affect lamp darkening. Water vapor dissociates into hydrogen and oxygen at the hot filament. The oxygen attacks the tungsten metal, and the resulting tungsten oxide particles travel to cooler parts of the lamp. Hydrogen from water vapor reduces the oxide, reforming water vapor and continuing this water cycle. The equivalent of a drop of water distributed over 500,000 lamps will significantly increase darkening. Small amounts of substances such as zirconium are placed within the lamp as a getter to react with any oxygen that may bake out of the lamp components during operation.

Some old, high-powered lamps used in theater, projection, searchlight, and lighthouse service with heavy, sturdy filaments contained loose tungsten powder within the envelope. From time to time, the operator would remove the bulb and shake it, allowing the tungsten powder to scrub off most of the tungsten that had condensed on the interior of the envelope, removing the blackening and brightening the lamp again.

The halogen lamp reduces uneven evaporation of the filament and eliminates darkening of the envelope by filling the lamp with a halogen gas at low pressure, rather than an inert gas. The halogen cycle increases the lifetime of the bulb and prevents its darkening by redepositing tungsten from the inside of the bulb back onto the filament. The halogen lamp can operate its filament at a higher temperature than a standard gas-filled lamp of similar power without loss of operating life. Such bulbs are much smaller than normal incandescent bulbs and are widely used where intense illumination is needed in a limited space. Fiber-optic lamps for optical microscopy is one typical application.
Incandescent arc lamps

A variation of the incandescent lamp did not use a hot wire filament, but instead used an arc struck on a spherical bead electrode to produce heat. The electrode then became incandescent, with the arc contributing little to the light produced. Such lamps were used for projection or illumination for scientific instruments such as microscopes. These arc lamps ran on relatively low voltages and incorporated tungsten filaments to start ionization within the envelope. They provided the intense concentrated light of an arc lamp but were easier to operate. Developed around 1915, these lamps were displaced by mercury and xenon arc lamps. 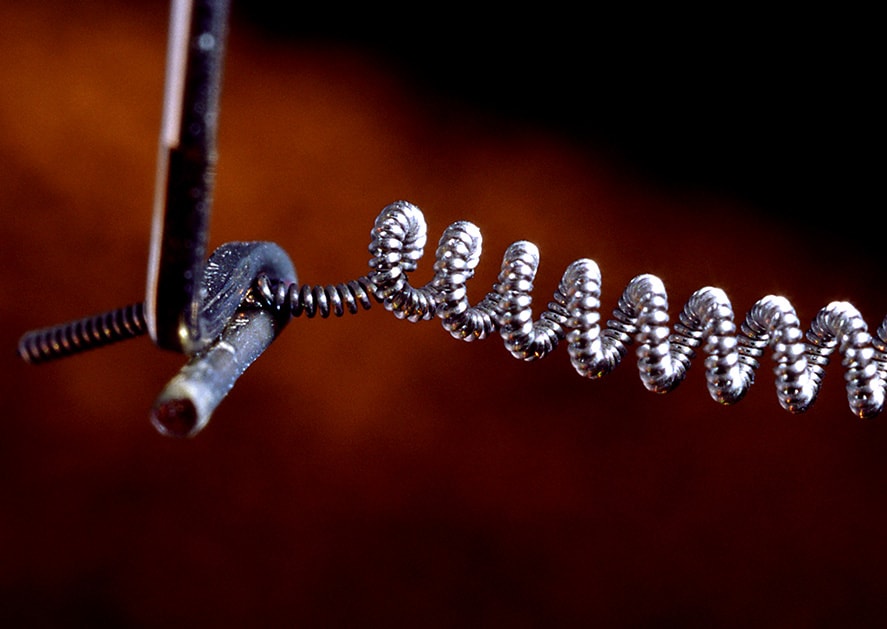