Scoop
The light that provides a soft-edged field of light used to provide additional subject illumination to reduce harsh shadows or areas not highlighted by the key light.

In television, film, stage, or photographic lighting, a fill light (often simply fill) may be used to reduce the contrast of a scene to match the dynamic range of the recording media and record the same amount of detail typically seen by eye in average lighting and considered normal. From that baseline of normality using more or less fill will make shadows seem lighter or darker than normal which will cause the viewer to react differently, by inferring both environmental and mood clues from the tone of the shadows.

The positioning of the fill affects the overall appearance of the lighting pattern. When a centered fill strategy is used the ratio is created by overlapping the key light over the foundation of fill. A key source of equal incident intensity to the fill, overlapping the even fill, will create a 2:1 reflected ratio (1 key + 1 fill over 1 Fill) = 2:1. The same two equal incident strength sources placed on the opposite side of a face will work to cancel each other out creating overall dimensionally flat appearance with dark unfilled voids in low areas neither light reach. Part of the learning curve with lighting is experimenting with the various highlight: shadow reflected ratios and fill positions, comparing them to baselines and reactions to what is seen by eye, and in doing that learning how to trigger the same reactions in the mind of the viewer. 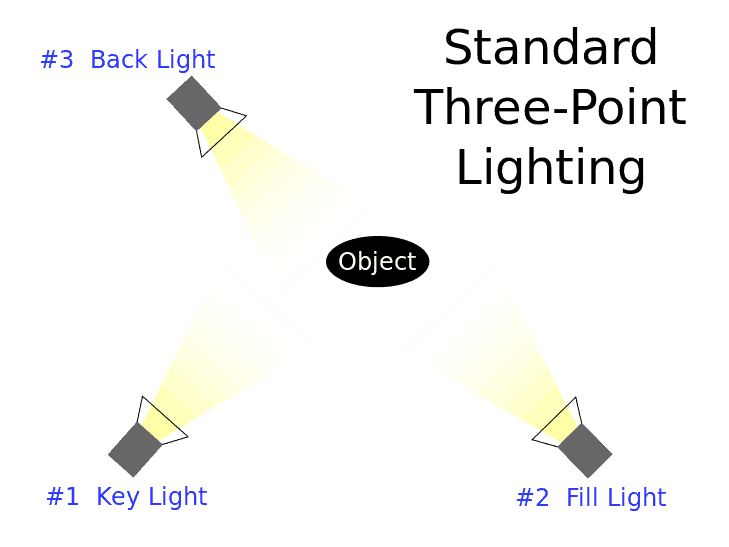 Fill light
also known as
see also
source
Adapted from content published on wikipedia.org
credit
Last modified on August 10, 2019, 6:05 am
previous
next
Videocide.com is a service provided by Codecide, a company located in Chicago, IL USA.