Projectors, multiplexors and cameras, connected for the purpose of transferring film to video.

A film chain or film island is a television – professional video camera with one or more projectors aligned into the photographic lens of the camera. With two or more projectors a system of front-surface mirrors that can pop-up is used in a multiplexer. These mirrors switch different projectors into the camera lens. The camera could be fed live to air for broadcasting through a vision mixer or recorded to a VTR for post-production or later broadcast. In most TV use this has been replaced by a telecine.

The projectors often are 16 mm film movie projector, a 35 mm slide projector and a 35 mm film movie projector. In low-end use, the motion picture 35 mm projector would be replaced by a second 16 mm projector or 8 mm film, or Super 8 mm film or Single-8 projector. The multiplexer with the camera and projectors surrounding it would often be called a film island. The optical or mag or magnetic strip soundtrack on the motion picture would be picked up by the projector and would be fed to an audio sound mixing console or to the VTR. (See: Sound-on-film, Film sound, and 35 mm sound.)

The slide projector at a TV station would be used for the TV station's logo, the famous "Please Stand By" slide and some test patterns. Some used a dual-rotating drum slide projector that would have its own mirrors to switch between the drums.

The film projectors used in a film chain are not standard. A special five-blade shutter is used to convert the film's 24 frames per second into NTSC's 30 frames per second video. If this was not used, the video would have major flicker problems. This process is called a "3:2" pull down. Modern telecines use the same process, but it is done electronically, not with a five-blade shutter. "3:2" pull-down means that a film frame is shown for three TV fields. The next film frame is shown for two TV fields. The add field in the "3" is used to convert the 24 frames per second to 30 frames per second. A normal projector has a two-bladed shutter that shows the same frame twice. Before modern continuous motion telecines, film chains were sometimes referred to as telecines.

All film projectors use sprocket rollers to move the film and pull-down claws to move and stop the film in the gate. The film is moved in the gate while the shutter blocks the light.

In PAL, SECAM, and other 25 frames per second systems, the film projector speed is increased one frame per second to 25 frames/s. This gives a one-to-one film to video frame transfer ratio. Thus a standard two-bladed shutter can be used.

A film chain usually used a video camera tube as this reduced flicker. Vidicon image picks up tubes were the preferred pick up for film chains as these gave the least amount of flicker. When charge-coupled device (CCD) cameras were introduced these were also used in a film chain. CCD cameras often gave a sharper picture, but with more flicker.

Early film chains had black and white (B&W) cameras and many were later replaced with color. The camera could be a standard professional video camera, but most often was a camera designed for the purpose of film transfer.

Originally only the print positive film was used. Later cameras that could invert and color correct color negative film were used.

Professional video cameras made for film chains were used for broadcast use.

A scene-by-scene color correction option was later added to film chains. This was first done by notching the edge of the film where a color change was wanted. Later, machines that counted the sprocket holes were used. At the mark (the notch or the electronic sprocket-count number) the next stored color correction would occur. See color grading for more information. 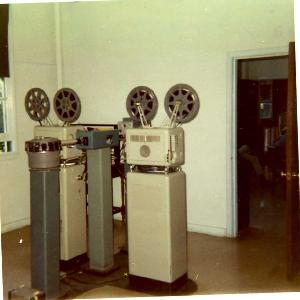 Film chain
see also
source
Adapted from content published on wikipedia.org
credit
Last modified on August 10, 2019, 6:11 am
previous
next
Videocide.com is a service provided by Codecide, a company located in Chicago, IL USA.