Square holes in the side of a roll of film that is used to wind it through the camera or projector's mechanism.

Film perforations, also known as perfs and sprocket holes, are the holes placed in the film stock during manufacturing and used for transporting (by sprockets and claws) and steadying (by pin registration) the film. Films may have different types of perforations depending on film gauge, film format, and intended usage. Perforations are also used as a standard measuring reference within certain camera systems to refer to the size of the frame.

Some formats are referred to in terms of the ratio "perforations per frame/gauge size" to provide an easy way of denoting size. For instance, 35mm Academy is also known as 4 perf-35mm; VistaVision is 8 perf-35mm; the long-time standard Todd-AO 70 mm film is 5 perf-70mm, and IMAX is 15 perf-70mm. This description does not indicate whether the film transport is horizontal or vertical, but uncertainty is precluded because there are currently no horizontal systems using the same number of perforations on the same gauge as a vertical one.

One of the characteristics of perforations is their "pitch". This is the measurement of the distance between the tops of two sequential perforations. For motion picture 35 mm film and 16 mm film, there are two different pitches—short pitch (camera stocks intended for duplication or printing, and most intermediate applications) and long pitch (camera stocks intended for direct projection, print stocks, and special intermediate applications). For 35 mm film these are 0.1866" and 0.1870" (4.740 mm and 4.750 mm); for 16 mm film they are 0.2994" and 0.3000" (7.605 mm and 7.620 mm).

This distinction arose because early nitrocellulose film base naturally shrank about 0.3% in processing due to heat, so film printing equipment was designed to account for a size difference between its (processed) input and (unprocessed) output. When cellulose acetate film was developed, which does not shrink, two forms were produced for compatibility with existing equipment. 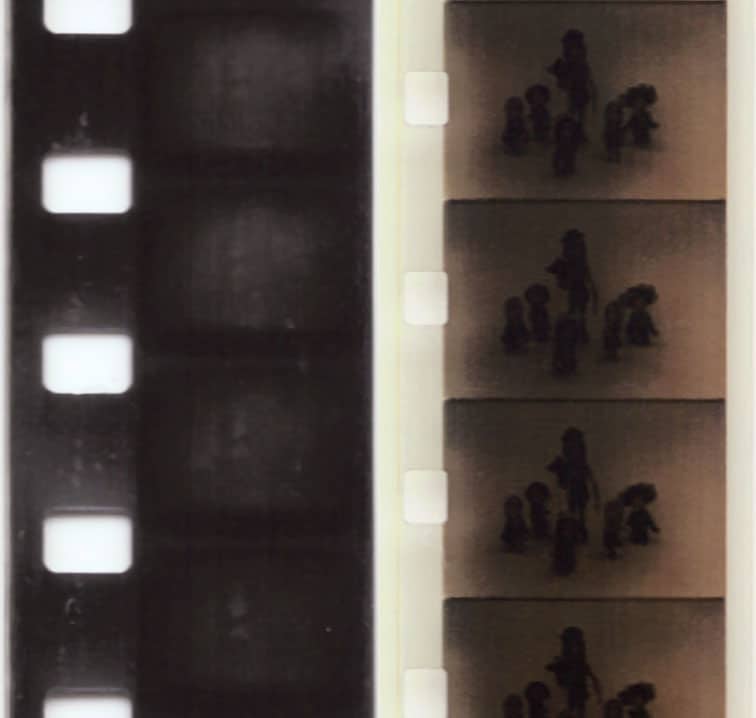