A type of lens placed in front of lamps in order to focus the light given off into a controllable beam.

The design allows the construction of lenses of large aperture and short focal length without the mass and volume of material that would be required by a lens of conventional design. A Fresnel lens can be made much thinner than a comparable conventional lens, in some cases taking the form of a flat sheet. A Fresnel lens can capture more oblique light from a light source, thus allowing the light from a lighthouse equipped with one to be visible over greater distances.

The Fresnel lens reduces the amount of material required compared to a conventional lens by dividing the lens into a set of concentric annular sections. An ideal Fresnel lens would have an infinite number of sections. In each section, the overall thickness is decreased compared to an equivalent simple lens. This effectively divides the continuous surface of a standard lens into a set of surfaces of the same curvature, with stepwise discontinuities between them.

In some lenses, the curved surfaces are replaced with flat surfaces, with a different angle in each section. Such a lens can be regarded as an array of prisms arranged in a circular fashion, with steeper prisms on the edges, and a flat or slightly convex center. In the first (and largest) Fresnel lenses, each section was actually a separate prism. 'Single-piece' Fresnel lenses were later produced, being used for automobile headlamps, brake, parking, and turn signal lenses, and so on. In modern times, computer-controlled milling equipment (CNC) might be used to manufacture more complex lenses.

Fresnel lens design allows a substantial reduction in thickness (and thus mass and volume of material), at the expense of reducing the imaging quality of the lens, which is why precise imaging applications such as photography usually still use larger conventional lenses.

Fresnel lenses are usually made of glass or plastic; their size varies from large (old historical lighthouses, meter size) to medium (book-reading aids, OHP viewgraph projectors) to small (TLR/SLR camera screens, micro-optics). In many cases they are very thin and flat, almost flexible, with thicknesses in the 1 to 5 mm (0.04 to 0.2 in) range.

Modern Fresnel lenses usually consist of all refractive elements. However many of the lighthouses have both refracting and reflecting elements, as shown in the photographs and diagram. That is, the outer elements are sections of reflectors while the inner elements are sections of refractive lenses. Total internal reflection was often used to avoid the light loss in reflection from a silvered mirror. 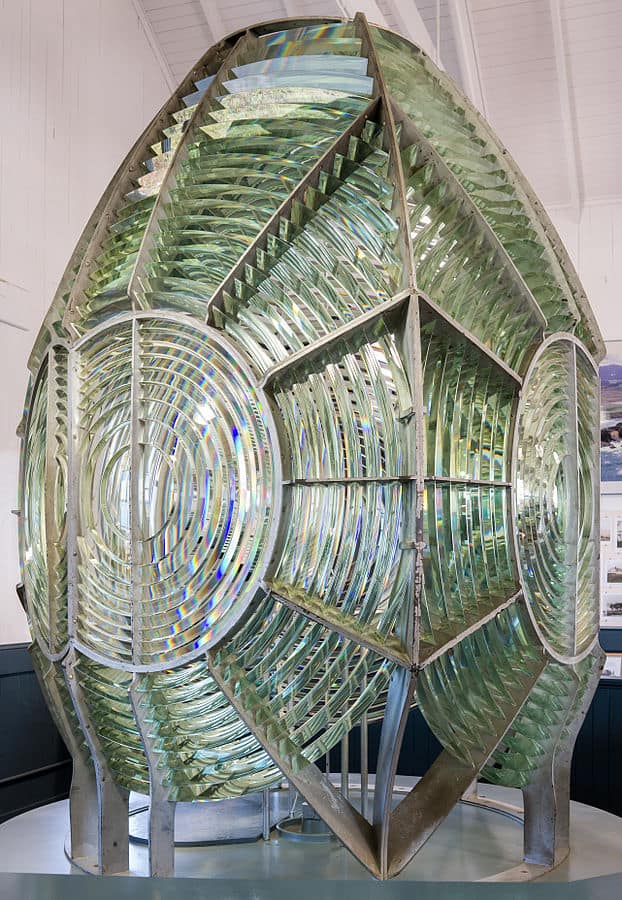 Fresnel lens
see also
source
Adapted from content published on wikipedia.org
Last modified on May 26, 2019, 10:58 am
previous
next
Videocide.com is a service provided by Codecide, a company located in Chicago, IL USA.