A type of tripod head mount that relies on friction to hold its position.

A friction head is a type of tripod head mount that relies on friction to hold its position — it's not meant to be moved around frequently. A tripod head is more appropriate for still photography than for video.

A ball head uses a ball and socket type joint for orientation control. The ball sits in a socket, which can be tightened to lock the ball in place. A stem extends from the ball which terminates at the head mount. They tend to have fewer parts than other types of tripod heads due to their simple mechanism, but the parts must be precisely machined to fit well together and provide smooth movement, increasing their average price. Ballheads offer the convenience of simple controls but are lacking in terms of precise movements, making specific alignment and image positioning a challenge.

The most basic ball heads offer a single control, a tension control, which is used to tighten or loosen the joint and prevent or allow movement of the attached device. Higher-end heads may offer additional controls. Some have independent panning control, which allows the entire joint mechanism to be rotated horizontally 360° while maintaining the orientation of the ball joint. Other ball heads include an additional control on the joint, called a drag control. This allows the user to set a secondary tension level on the ball, based on the current load, to hold the attached device in place when the tension control is disengaged, while still allowing explicit movements.

A pan head, also called pan and tilt head, allows independent rotation of the camera about two or three perpendicular axes, which normally do not intersect. Typical pan heads have lockable levers for each axis, a scale marked in degrees at least for the vertical axis, and one or more spirit levels. This construction is significantly more complicated than that of a ball head.

Pan heads can be used for panoramas, but suffer from the deficiency that the axes of rotation normally do not go through the entrance pupil of the lens and thus can give rise to problems with parallax. A better choice for panoramas is a custom-built panoramic tripod head.

Some specialist pan heads, such as the Induro PHQ series, offer up to five axes of rotation, two of them in parallel with the other axes.

A geared head takes a pan and tilt head and adds gears to each of the axes. They typically have a release on each axis to allow for rough positioning the camera, and geared controls then allow small adjustments to finesse composition. They are typically heavier than ball or pan heads due to the weight of the mechanisms.

Panoramic heads facilitate taking a number of images that will be stitched together to make a single panoramic image. The most important function is to rotate the camera around the entrance pupil of the lens, frequently (but inaccurately) called the nodal point. Commercially available heads are categorized as "single-row heads" and "multi-row heads". Single row heads rotate around a single vertical axis and typically require the lens axis to be positioned horizontally. Multi-row heads allow rotation about two axes.

Gimbal heads are designed mainly for long, heavy telephoto lenses, and are often used for wildlife or sports photography. Their primary feature is the ability to balance the camera and lens within the tripod head and use tension controls to simulate a "weightlessness", where the camera can be moved freely, but stays in place when not being moved. They allow for easy tracking along the vertical and horizontal axis, but generally do not offer the ability to make precise angular movements along with either. A gimbal head excels at tracking a fast-moving subject and allowing large, cumbersome camera setups to be used with more agility than nearly any other support system.

Fluid heads are the dominant tripod heads used in the motion picture industry. They provide extremely smooth free movement, even with the heaviest of filmmaking and professional video cameras. The fluid reduces the risk of the camera operator introducing any jerkiness or vibration to the shot during a pan or tilt through dampening and also reduces the friction between moving parts of the head. As the size of high-quality video cameras has become greatly reduced, there are now fluid heads designed even for consumer camcorders, which are being used increasingly in television production environments. 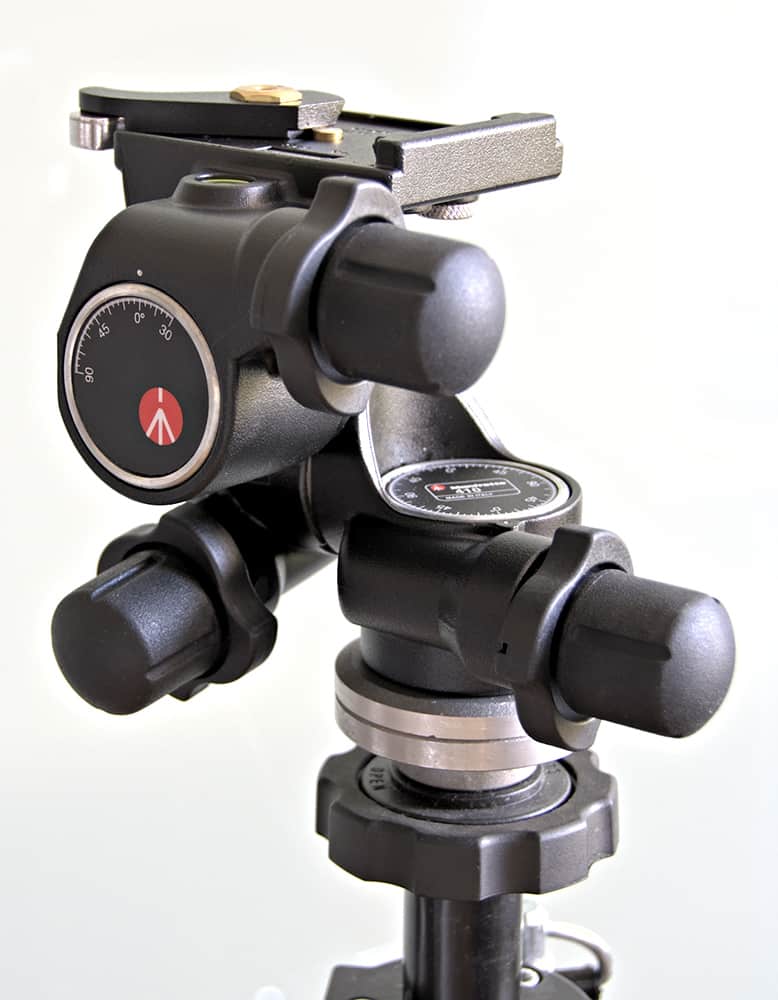