In contrast to rear projection, in front projection, the background image is projected onto both the performer and a highly reflective background screen, with the result that the projected image is bounced off the screen and into the lens of a camera. This is achieved by having a screen made of a retroreflective material such as Scotchlite, a product of the 3M company that is also used to make screens for movie theaters. Such material is made from millions of glass beads affixed to the surface of the cloth. These glass beads reflect light back only in the direction from which it came, far more efficiently than any common surface.

The actor (or subject) performs in front of the reflective screen with a movie camera pointing straight at them. Just in front of the camera is a one-way mirror angled at 45 degrees. At 90 degrees to the camera is a projector that projects an image of the background onto the mirror which reflects the image onto the performer and the highly reflective screen; the image is too faint to appear on the actor but shows up clearly on the screen. In this way, the actor becomes their own matte. The combined image is transmitted through the mirror and recorded by the camera. The technique is shown and explained in the "making-of-documentary" of the 1972 sci-fi film Silent Running.

It was first experimented with in 1949, shortly after the invention of Scotchlite, and had appeared in feature films by 1963, when the Japanese film Matango used it extensively for its yacht scenes. Another early appearance was in 1966, during the filming of 2001: A Space Odyssey. The actors in ape suits were filmed on a stage at Elstree Studios and combined with footage of Africa (the effect is revealed in the leopard's glowing eyes reflecting back the light). Dennis Muren used a very similar solution for his 1967 debut film Equinox, although Muren's technique didn't employ Scotchlite. Two British films released in 1969, On Her Majesty's Secret Service and The Assassination Bureau, used the technique, as did the 1968 film Where Eagles Dare. 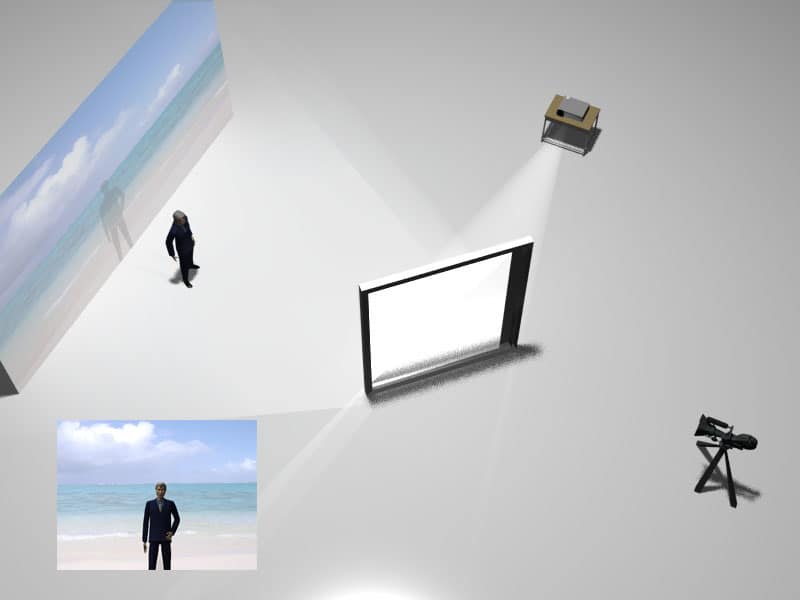