A measurement of the ratio between two quantities. In audio and video, gain refers to a measure of the increase in loudness, level or volume relative to the input signal.

In electronics, gain is a measure of the ability of a two-port circuit (often an amplifier) to increase the power or amplitude of a signal from the input to the output port by adding energy converted from some power supply to the signal. It is usually defined as the mean ratio of the signal amplitude or power at the output port to the amplitude or power at the input port. It is often expressed using the logarithmic decibel (dB) units ("dB gain"). A gain greater than one (greater than zero dB), that is amplification, is the defining property of an active component or circuit, while a passive circuit will have a gain of less than one.

The term gain alone is ambiguous, and can refer to the ratio of output to input voltage (voltage gain), current (current gain) or electric power (power gain). In the field of audio and general purpose amplifiers, especially operational amplifiers, the term usually refers to voltage gain, but in radio frequency amplifiers it usually refers to power gain. Furthermore, the term gain is also applied in systems such as sensors where the input and output have different units; in such cases the gain units must be specified, as in "5 microvolts per photon" for the responsivity of a photosensor. The "gain" of a bipolar transistor normally refers to forward current transfer ratio, either hFE ("beta", the static ratio of Ic divided by Ib at some operating point), or sometimes hfe (the small-signal current gain, the slope of the graph of Ic against Ib at a point).

The gain of an electronic device or circuit generally varies with the frequency of the applied signal. Unless otherwise stated, the term refers to the gain for frequencies in the passband, the intended operating frequency range of the equipment. The term gain has a different meaning in antenna design; antenna gain is the ratio of radiation intensity from a directional antenna to P in / 4 π {\displaystyle P_{\text{in}}/4\pi } P_{{\text{in}}}/4\pi (mean radiation intensity from a lossless antenna). 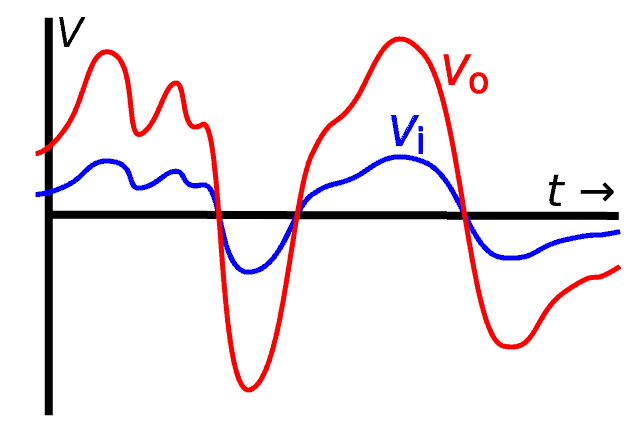 glossary_ G - 400
see also
source
Adapted from content published on wikipedia.org
Last modified on May 15, 2019, 11:19 am
previous
next
Videocide.com is a service provided by Codecide, a company located in Chicago, IL USA.