A measure of the correction applied to the video display to compensate for the input signal.

Gamma correction, or often simply gamma, is a nonlinear operation used to encode and decode luminance or tristimulus values in video or still image systems.

Gamma encoding of images is used to optimize the usage of bits when encoding an image, or bandwidth used to transport an image, by taking advantage of the non-linear manner in which humans perceive light and color. The human perception of brightness, under common illumination conditions (not pitch black nor blindingly bright), follows an approximate power function (note: no relation to the gamma function), with greater sensitivity to relative differences between darker tones than between lighter ones, consistent with the Stevens' power law for brightness perception. If images are not gamma-encoded, they allocate too many bits or too much bandwidth to highlights that humans cannot differentiate, and too few bits or too little bandwidth to shadow values that humans are sensitive to and would require more bits/bandwidth to maintain the same visual quality. Gamma encoding of floating-point images is not required (and may be counterproductive), because the floating-point format already provides a piecewise linear approximation of a logarithmic curve.

Although gamma encoding was developed originally to compensate for the input–output characteristic of cathode ray tube (CRT) displays, that is not its main purpose or advantage in modern systems. In CRT displays, the light intensity varies nonlinearly with the electron-gun voltage. Altering the input signal by gamma compression can cancel this nonlinearity, such that the output picture has the intended luminance. However, the gamma characteristics of the display device do not play a factor in the gamma encoding of images and video—they need gamma encoding to maximize the visual quality of the signal, regardless of the gamma characteristics of the display device. The similarity of CRT physics to the inverse of gamma encoding needed for video transmission was a combination of coincidence and engineering, which simplified the electronics in early television sets.

When a photographic film is exposed to light, the result of the exposure can be represented on a graph showing log of exposure on the horizontal axis, and density, or log of transmittance, on the vertical axis. For a given film formulation and processing method, this curve is its characteristic or Hurter–Driffield curve. Since both axes use logarithmic units, the slope of the linear section of the curve is called the gamma of the film. Negative film typically has a gamma less than 1; positive film (slide film, reversal film) typically has a gamma with absolute value greater than 1.

Photographic film has a much greater ability to record fine differences in shade than can be reproduced on photographic paper. Similarly, most video screens are not capable of displaying the range of brightnesses (dynamic range) that can be captured by typical electronic cameras. For this reason, considerable artistic effort is invested in choosing the reduced form in which the original image should be presented. The gamma correction, or contrast selection, is part of the photographic repertoire used to adjust the reproduced image.

Analogously, digital cameras record light using electronic sensors that usually respond linearly. In the process of rendering linear raw data to conventional RGB data (e.g. for storage into JPEG image format), color space transformations and rendering transformations will be performed. In particular, almost all standard RGB color spaces and file formats use a non-linear encoding (a gamma compression) of the intended intensities of the primary colors of the photographic reproduction; in addition, the intended reproduction is almost always nonlinearly related to the measured scene intensities, via a tone reproduction nonlinearity. 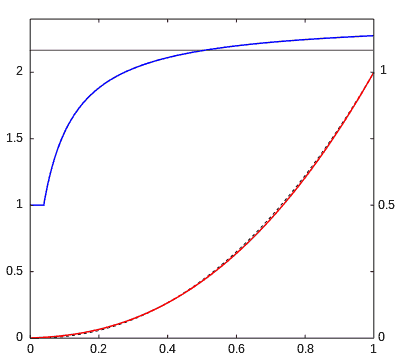 glossary_ G - 400
see also
source
Adapted from content published on wikipedia.org
Last modified on May 15, 2019, 11:22 am
Gamma
Gamut
Videocide.com is a service provided by Codecide, a company located in Chicago, IL USA.