When any signal is passed through an electronic circuit, the signal may be changed in many ways. In video, the image may become blurred, noisy or contain shadows. In audio, odd harmonics (third, fifth, etc.) produce harsh and unpleasant sounding audio. 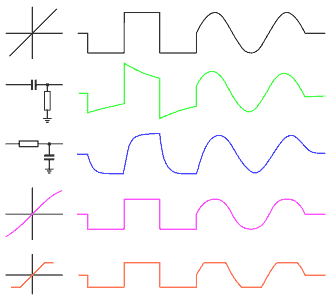 Harmonic distortion
see also
source
Adapted from content published on wikipedia.org
credit
Last modified on August 12, 2019, 6:08 am
previous
next
Videocide.com is a service provided by Codecide, a company located in Chicago, IL USA.