Most commonly used to refer to the high-quality audio tracks recorded by many VCRs.

High fidelity (often shortened to hi-fi or hifi) is a term used by listeners, audiophiles and home audio enthusiasts to refer to high-quality reproduction of sound. This is in contrast to the lower quality sound produced by inexpensive audio equipment, or the inferior quality of sound reproduction that can be heard in recordings made until the late 1940s.

Ideally, high-fidelity equipment has inaudible noise and distortion, and a flat (neutral, uncolored) frequency response within the human hearing range.

Bell Laboratories began experimenting with a range of recording techniques in the early 1930s. Performances by Leopold Stokowski and the Philadelphia Orchestra were recorded in 1931 and 1932 using telephone lines between the Academy of Music in Philadelphia and the Bell labs in New Jersey. Some multitrack recordings were made on optical sound film, which led to new advances used primarily by MGM (as early as 1937) and 20th Century-Fox Film Corporation (as early as 1941). RCA Victor began recording performances by several orchestras using optical sound around 1941, resulting in higher-fidelity masters for 78-rpm discs. During the 1930s, Avery Fisher, an amateur violinist, began experimenting with audio design and acoustics. He wanted to make a radio that would sound like he was listening to a live orchestra—that would achieve high fidelity to the original sound. After World War II, Harry F. Olson conducted an experiment whereby test subjects listened to a live orchestra through a hidden variable acoustic filter. The results proved that listeners preferred high fidelity reproduction, once the noise and distortion introduced by early sound equipment was removed.

Beginning in 1948, several innovations created the conditions that made for major improvements of home-audio quality possible:

In the 1950s, audio manufacturers employed the phrase high fidelity as a marketing term to describe records and equipment intended to provide faithful sound reproduction. While some consumers simply interpreted high fidelity as fancy and expensive equipment, many found the difference in quality between "hi-fi" and the then standard AM radios and 78 rpm records readily apparent and bought 33⅓ LPs such as RCA's New Orthophonics and London's ffrr (Full Frequency Range Recording, a UK Decca system); and high-fidelity phonographs. Audiophiles paid attention to technical characteristics and bought individual components, such as separate turntables, radio tuners, preamplifiers, power amplifiers and loudspeakers. Some enthusiasts even assembled their own loudspeaker systems. In the 1950s, hi-fi became a generic term for home sound equipment, to some extent displacing phonograph and record player.

In the late 1950s and early 1960s, the development of the Westrex single-groove stereophonic record cutterhead led to the next wave of home-audio improvement, and in common parlance stereo displaced hi-fi. Records were now played on a stereo. In the world of the audiophile, however, the concept of high fidelity continued to refer to the goal of highly accurate sound reproduction and to the technological resources available for approaching that goal. This period is regarded as the "Golden Age of Hi-Fi", when vacuum tube equipment manufacturers of the time produced many models considered endearing by modern audiophiles, and just before solid state (transistorized) equipment was introduced to the market, subsequently replacing tube equipment as the mainstream technology.

A popular type of system for reproducing music beginning in the 1970s was the integrated music centre—which combined a phonograph turntable, AM-FM radio tuner, tape player, preamplifier, and power amplifier in one package, often sold with its own separate, detachable or integrated speakers. These systems advertised their simplicity. The consumer did not have to select and assemble individual components, or be familiar with impedance and power ratings. Purists generally avoid referring to these systems as high fidelity, though some are capable of very good quality sound reproduction. Audiophiles in the 1970s and 1980s preferred to buy each component separately. That way, they could choose models of each component with the specifications that they desired. In the 1980s, a number of audiophile magazines became available, offering reviews of components and articles on how to choose and test speakers, amplifiers and other components.

Listening tests are used by hi-fi manufacturers, audiophile magazines and audio engineering researchers and scientists. If a listening test is done in such a way that the listener who is assessing the sound quality of a component or recording can see the components that are being used for the test (e.g., the same musical piece listened to through a tube power amplifier and a solid state amplifier), then it is possible that the listener's pre-existing biases towards or against certain components or brands could affect their judgment. To respond to this issue, researchers began to use blind tests, in which the researchers can see the components being tested, but the listeners undergoing the experiments can't. In a double-blind experiment, neither the listeners nor the researchers know who belongs to the control group and the experimental group, or which type of audio component is being used for which listening sample. Only after all the data has been recorded (and in some cases, analyzed) do the researchers learn which components or recordings were preferred by the listeners. A commonly used variant of this test is the ABX test. A subject is presented with two known samples (sample A, the reference, and sample B, an alternative), and one unknown sample X, for three samples total. X is randomly selected from A and B, and the subject identifies X as being either A or B. Although there is no way to prove that a certain methodology is transparent, a properly conducted double-blind test can prove that a method is not transparent.

Scientific double-blind tests are sometimes used as part of attempts to ascertain whether certain audio components (such as expensive, exotic cables) have any subjectively perceivable effect on sound quality. Data gleaned from these double-blind tests is not accepted by some "audiophile" magazines such as Stereophile and The Absolute Sound in their evaluations of audio equipment. John Atkinson, current editor of Stereophile, stated (in a 2005 July editorial named Blind Tests & Bus Stops) that he once purchased a solid-state amplifier, the Quad 405, in 1978 after seeing the results from blind tests, but came to realize months later that "the magic was gone" until he replaced it with a tube amp. Robert Harley of The Absolute Sound wrote, in a 2008 editorial (on Issue 183), that: "...blind listening tests fundamentally distort the listening process and are worthless in determining the audibility of a certain phenomenon."

Doug Schneider, editor of the online Soundstage network, refuted this position with two editorials in 2009. He stated: "Blind tests are at the core of the decades' worth of research into loudspeaker design done at Canada's National Research Council (NRC). The NRC researchers knew that for their result to be credible within the scientific community and to have the most meaningful results, they had to eliminate bias, and blind testing was the only way to do so." Many Canadian companies such as Axiom, Energy, Mirage, Paradigm, PSB and Revel use blind testing extensively in designing their loudspeakers. Audio professional Dr. Sean Olive of Harman International shares this view.

Stereophonic sound provided a partial solution to the problem of creating the illusion of live orchestral performers by creating a phantom middle channel when the listener sits exactly in the middle of the two front loudspeakers. When the listener moves slightly to the side, however, this phantom channel disappears or is greatly reduced. An attempt to provide for the reproduction of the reverberation was tried in the 1970s through quadraphonic sound but, again, the technology at that time was insufficient for the task. Consumers did not want to pay the additional costs and space required for the marginal improvements in realism. With the rise in popularity of home theater, however, multi-channel playback systems became affordable, and many consumers were willing to tolerate the six to eight channels required in a home theater. The advances made in signal processors to synthesize an approximation of a good concert hall can now provide a somewhat more realistic illusion of listening in a concert hall.

In addition to spatial realism, the playback of music must be subjectively free from noise, such as hiss or hum, to achieve realism. The compact disc (CD) provides about 90 decibels of dynamic range, which exceeds the 80 dB dynamic range of music as normally perceived in a concert hall. Audio equipment must be able to reproduce frequencies high enough and low enough to be realistic. The human hearing range, for healthy young persons, is 20 Hz to 20,000 Hz. Most adults can't hear higher than 15 kHz. CDs are capable of reproducing frequencies as low as 0 Hz and as high as 22.05 kHz, making them adequate for reproducing the frequency range that most humans can hear. The equipment must also provide no noticeable distortion of the signal or emphasis or de-emphasis of any frequency in this frequency range.

Integrated, mini, or lifestyle systems (also known by the older terms music centre or midi system) contain one or more sources such as a CD player, a tuner, or a cassette deck together with a preamplifier and a power amplifier in one box. Although some high-end manufacturers do produce integrated systems, such products are generally disparaged by audiophiles, who prefer to build a system from separates (or components), often with each item from a different manufacturer specialising in a particular component. This provides the most flexibility for piece-by-piece upgrades and repairs.

For slightly less flexibility in upgrades, a preamplifier and a power amplifier in one box is called an integrated amplifier; with a tuner, it is a receiver. A monophonic power amplifier, which is called a monoblock, is often used for powering a subwoofer. Other modules in the system may include components like cartridges, tonearms, hi-fi turntables, Digital Media Players, digital audio players, DVD players that play a wide variety of discs including CDs, CD recorders, MiniDisc recorders, hi-fi videocassette recorders (VCRs) and reel-to-reel tape recorders. Signal modification equipment can include equalizers and signal processors.

This modularity allows the enthusiast to spend as little or as much as they want on a component that suits their specific needs. In a system built from separates, sometimes a failure on one component still allows partial use of the rest of the system. A repair of an integrated system, though, means complete lack of use of the system. Another advantage of modularity is the ability to spend money on only a few core components at first and then later add additional components to the system. Some of the disadvantages of this approach are increased cost, complexity, and space required for the components.

In the 2000s, modern hi-fi equipment can include signal sources such as digital audio tape (DAT), digital audio broadcasting (DAB) or HD Radio tuners. Some modern hi-fi equipment can be digitally connected using fibre optic TOSLINK cables, universal serial bus (USB) ports (including one to play digital audio files), or Wi-Fi support. Another modern component is the music server consisting of one or more computer hard drives that hold music in the form of computer files. When the music is stored in an audio file format that is lossless such as FLAC, Monkey's Audio or WMA Lossless, the computer playback of recorded audio can serve as an audiophile-quality source for a hi-fi system. 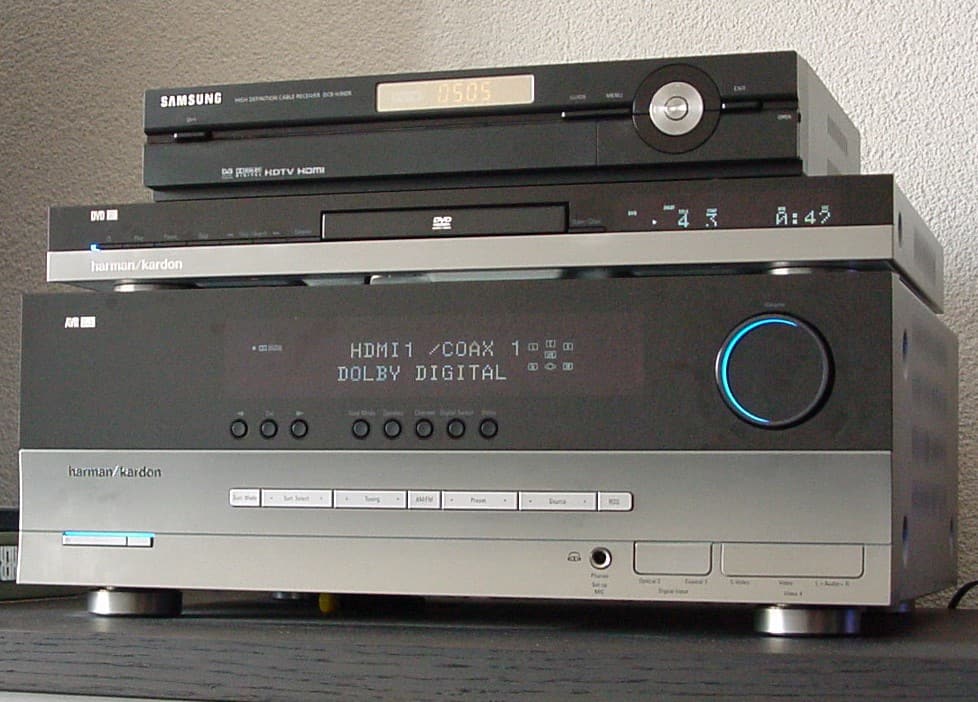