Specification denoting the amount of discernable detail across a screen's width. Measured in lines or dots per inch, the higher the number the better the picture quality.

Specification denoting the amount of discernable detail across a screen's width. Measured in lines or dots per inch, the higher the number the better the picture quality.

Monitors do not have dots, but do have pixels; the closely related concept for monitors and images is pixels per inch or PPI. Many resources, including the Android developer guide, use the terms DPI and PPI interchangeably.

Since the 1980s, the Microsoft Windows operating system has set the default display "DPI" to 96 PPI, while Apple/Macintosh computers have used a default of 72 PPI. These default specifications arose out of the problems rendering standard fonts in the early display systems of the 1980s, including the IBM-based CGA, EGA, VGA, and 8514 displays as well as the Macintosh displays featured in the 128K computer and its successors. The choice of 72 PPI by Macintosh for their displays arose from existing convention: the official 72 points per inch mirrored the 72 pixels per inch that appeared on their display screens. (Points are a physical unit of measure in typography, dating from the days of printing presses, where 1 point by the modern definition is 1/72 of the international inch (25.4 mm), which therefore makes 1 point approximately 0.0139 in or 352.8 µm). Thus, the 72 pixels per inch seen on the display had exactly the same physical dimensions as the 72 points per inch later seen on a printout, with 1 pt in printed text equal to 1 px on the display screen. As it is, the Macintosh 128K featured a screen measuring 512 pixels in width by 342 pixels in height, and this corresponded to the width of standard office paper (512 px ÷ 72 px/in ≈ 7.1 in, with a 0.7 in margin down each side when assuming 8.5 in × 11 in North American paper size (in Europe, it's 21cm x 30cm - called "A4". B5 is 176 millimeters x 250 millimeters)). 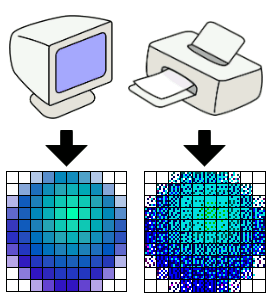