HSL (hue, saturation, lightness) and HSV (hue, saturation, value) are alternative representations of the RGB color model, designed in the 1970s by computer graphics researchers to more closely align with the way human vision perceives color-making attributes. In these models, colors of each hue are arranged in a radial slice, around a central axis of neutral colors which ranges from black at the bottom to white at the top. The HSV representation models the way paints of different colors mix together, with the saturation dimension resembling various shades of brightly colored paint, and the value dimension resembling the mixture of those paints with varying amounts of black or white paint. The HSL model attempts to resemble more perceptual color models such as the Natural Color System (NCS) or Munsell color system, placing fully saturated colors around a circle at a lightness value of ​1⁄2, where a lightness value of 0 or 1 is fully black or white, respectively.

HSL, HSV, and related models can be derived via geometric strategies, or can be thought of as specific instances of a "generalized LHS model". The HSL and HSV model-builders took an RGB cube—with constituent amounts of red, green, and blue light in a color denoted R, G, B ∈ —and tilted it on its corner, so that black rested at the origin with white directly above it along the vertical axis, then measured the hue of the colors in the cube by their angle around that axis, starting with red at 0°. Then they came up with a characterization of brightness/value/lightness, and defined saturation to range from 0 along the axis to 1 at the most colorful point for each pair of other parameters. 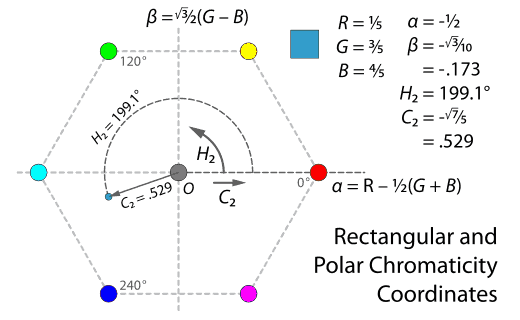 glossary_ HSV - 400
acronymn
see also
source
Adapted from content published on wikipedia.org
Last modified on May 17, 2019, 8:48 am
previous
next
Videocide.com is a service provided by Codecide, a company located in Chicago, IL USA.