The shade or tint of a color.

Hue is one of the main properties (called color appearance parameters) of a color, defined technically (in the CIECAM02 model), as "the degree to which a stimulus can be described as similar to or different from stimuli that are described as red, green, blue, and yellow", (which in certain theories of color vision are called unique hues). Hue can typically be represented quantitatively by a single number, often corresponding to an angular position around a central or neutral point or axis on a colorspace coordinate diagram (such as a chromaticity diagram) or color wheel, or by its dominant wavelength or that of its complementary color. The other color appearance parameters are colorfulness, saturation (also known as intensity or chroma), lightness, and brightness.

Usually, colors with the same hue are distinguished with adjectives referring to their lightness or colorfulness, such as with "light blue", "pastel blue", "vivid blue". Exceptions include brown, which is a dark orange.

In painting color theory, a hue is a pure pigment—one without tint or shade (added white or black pigment, respectively). Hues are first processed in the brain in areas in the extended V4 called globs.

There exists some correspondence, more or less precise, between hue values and color terms (names). One approach in color science is to use traditional color terms but try to give them more precise definitions. See spectral color#Table of spectral or near-spectral colors for names of highly saturated colors with the hue from ≈ 0° (red) up to ≈ 275° (violet), and line of purples#Table of highly-saturated purple colors for color terms of the remaining part of the color wheel.

Alternative approach is to use a systematic notation. It can be a standard angle notation for certain color model such as HSL/HSV mentioned above, CIELUV, or CIECAM02. Alphanumeric notations such as of Munsell color system, NCS, and Pantone Matching System are also used. 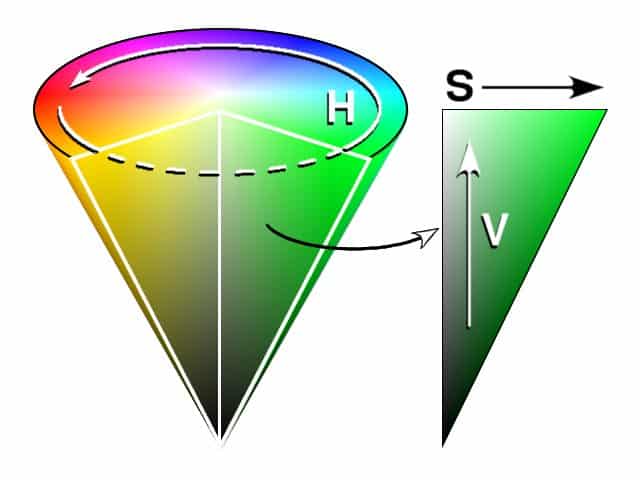 glossary_ H - 400
see also
source
Adapted from content published on wikipedia.org
Last modified on May 17, 2019, 8:50 am
previous
next
Videocide.com is a service provided by Codecide, a company located in Chicago, IL USA.