A sensor that detects and conveys information used to make an image. It does so by converting the variable attenuation of light waves (as they pass through or reflect off objects) into signals, small bursts of current that convey the information.

An image sensor or imager is a sensor that detects and conveys information used to make an image. It does so by converting the variable attenuation of light waves (as they pass through or reflect off objects) into signals, small bursts of current that convey the information. The waves can be light or other electromagnetic radiation. Image sensors are used in electronic imaging devices of both analog and digital types, which include digital cameras, camera modules, medical imaging equipment, night vision equipment such as thermal imaging devices, radar, sonar, and others. As technology changes, digital imaging tends to replace analog imaging.

Cameras integrated in small consumer products generally use CMOS sensors, which are usually cheaper and have lower power consumption in battery powered devices than CCDs. CCD sensors are used for high end broadcast quality video cameras, and (C)MOS sensors dominate in still photography and consumer goods where overall cost is a major concern. Both types of sensor accomplish the same task of capturing light and converting it into electrical signals.

Each cell of a CCD image sensor is an analog device. When light strikes the chip it is held as a small electrical charge in each photo sensor. The charges in the line of pixels nearest to the (one or more) output amplifiers are amplified and output, then each line of pixels shifts its charges one line closer to the amplifier(s), filling the empty line closest to the amplifiers(s). This process is then repeated until all the lines of pixels have had their charge amplified and output.

A CMOS image sensor has an amplifier for each pixel compared to the few amplifiers of a CCD. This results in less area for the capture of photons than a CCD, but this problem has been overcome by using microlenses in front of each photodiode, which focus light into the photodiode that would have otherwise hit the amplifier and not be detected. Some CMOS imaging sensors also use Back-side illumination to increase the number of photons that hit the photodiode. CMOS sensors can potentially be implemented with fewer components, use less power, and/or provide faster readout than CCD sensors. They are also less vulnerable to static electricity discharges.

Another design, a hybrid CCD/CMOS architecture (sold under the name "sCMOS") consists of CMOS readout integrated circuits (ROICs) that are bump bonded to a CCD imaging substrate – a technology that was developed for infrared staring arrays and has been adapted to silicon-based detector technology. Another approach is to utilize the very fine dimensions available in modern CMOS technology to implement a CCD like structure entirely in CMOS technology: such structures can be achieved by separating individual poly-silicon gates by a very small gap; though still a product of research hybrid sensors can potentially harness the benefits of both CCD and CMOS imagers.

There are several main types of color image sensors, differing by the type of color-separation mechanism:

Bayer filter sensor, low-cost and most common, using a color filter array that passes red, green, and blue light to selected pixel sensors. Each individual sensor element is made sensitive to red, green, and blue by means of a color gel made of chemical dye placed over each individual element. Although inexpensive to manufacture, this technique lacks the color purity of dichroic filters. Because the color gel segment must be separated from the others by a freme (similar to stained glass windows), less of the areal density of a Bayer filter sensor is available to capture light, making the Bayer filter sensor less sensitive than other color sensors of similar size. This loss can be negated by using larger sensor size, albeit at greater cost. The most common Bayer filter matrix uses two green pixels, and one each for red and blue. This results in less resolution for red and blue colors, corresponding to the human eye's reduced sensitivity at the limits of the visual spectrum. The missing color samples may interpolated using a demosaicing algorithm, or ignored altogether by lossy compression. In order to improve color information, techniques like color co-site sampling use a piezo mechanism to shift the color sensor in pixel steps.

Foveon X3 sensor, using an array of layered pixel sensors, separating light via the inherent wavelength-dependent absorption property of silicon, such that every location senses all three color channels. This method is similar to how color film for photography works. 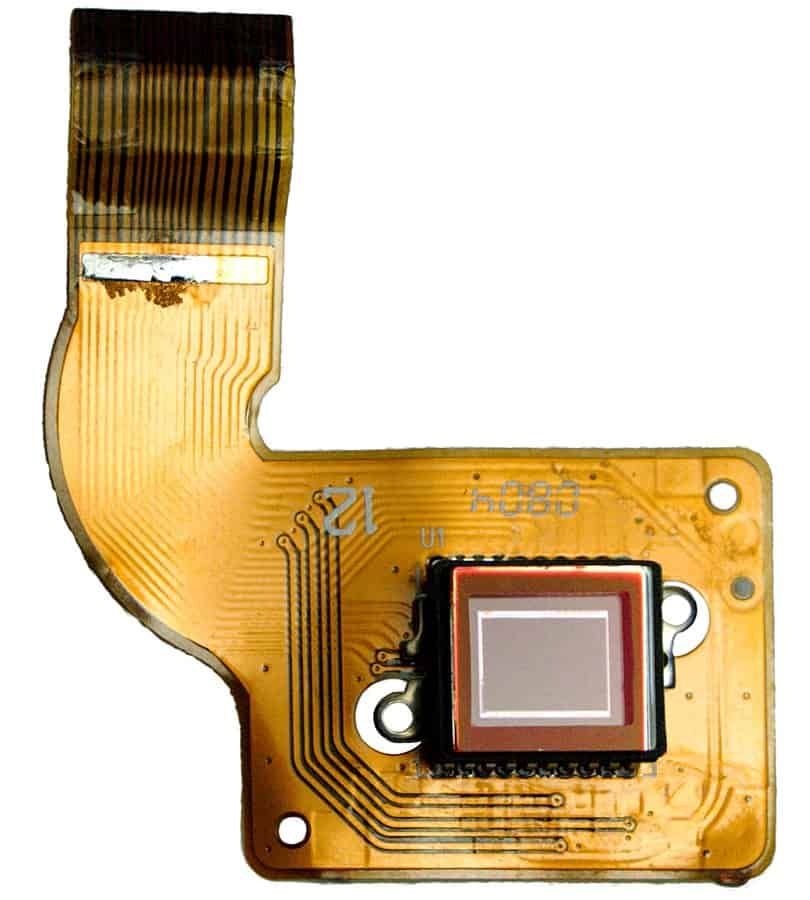 Image Sensor
see also
source
Adapted from content published on wikipedia.org
Last modified on May 28, 2019, 7:55 am
previous
next
Videocide.com is a service provided by Codecide, a company located in Chicago, IL USA.