A camcorder feature which takes out minor picture shakiness, either optically or electronically.

Image stabilization (IS) is a family of techniques that reduce blurring associated with the motion of a camera or other imaging device during exposure.

Generally, it compensates for pan and tilt (angular movement, equivalent to yaw and pitch) of the imaging device, though electronic image stabilization can also compensate for rotation. It is used in image-stabilized binoculars, still and video cameras, astronomical telescopes, and also smartphones, mainly the high-end. With still cameras, camera shake is a particular problem at slow shutter speeds or with long focal length (telephoto or zoom) lenses. With video cameras, camera shake causes visible frame-to-frame jitter in the recorded video. In astronomy, the problem of lens-shake is amplified by variation in the atmosphere, which changes the apparent positions of objects over time.

In photography, image stabilization can facilitate shutter speeds 2 to 4.5 stops slower (exposures 4 to 22 1⁄2 times longer), and even slower effective speeds have been reported.

The rule of thumb to determine the slowest shutter speed possible for hand-holding without noticeable blur due to camera shake is to take the reciprocal of the 35 mm equivalent focal length of the lens, also known as the "1/mm rule". For example, at a focal length of 125 mm on a 35 mm camera, vibration or camera shake could affect sharpness if the shutter speed is slower than 1⁄125 second. As a result of the 2-to-4.5-stops slower shutter speeds allowed by IS, an image taken at 1⁄125 second speed with an ordinary lens could be taken at 1⁄15 or 1⁄8 second with an IS-equipped lens and produce almost the same quality. The sharpness obtainable at a given speed can increase dramatically. When calculating the effective focal length, it is important to take into account the image format a camera uses. For example, many digital SLR cameras use an image sensor that is 2⁄3, 5⁄8, or 1⁄2 the size of a 35 mm film frame. This means that the 35 mm frame is 1.5, 1.6, or 2 times the size of the digital sensor. The latter values are referred to as the crop factor, field-of-view crop factor, focal-length multiplier, or format factor. On a 2× crop factor camera, for instance, a 50 mm lens produces the same field of view as a 100 mm lens used on a 35 mm film camera, and can typically be handheld at 1⁄100 second.

However, image stabilization does not prevent motion blur caused by the movement of the subject or by extreme movements of the camera. Image stabilization is only designed for and capable of reducing blur that results from normal, minute shaking of a lens due to hand-held shooting. Some lenses and camera bodies include a secondary panning mode or a more aggressive 'active mode', both described in greater detail below under optical image stabilization.

Image-stabilization features can also be a benefit in astrophotography, when the camera is technically—but not effectively—fixed in place. The Pentax K-5 and K-r can use their sensor-shift capability to reduce star trails in reasonable exposure times when equipped with the O-GPS1 GPS accessory for position data. In effect, the stabilization compensates for the Earth's motion, not the camera's.

There are two types of implementation—lens-based, or body-based stabilization. These refer to where the stabilizing system is located. Both have their advantages and disadvantages.

Real-time digital image stabilization, also called electronic image stabilization (EIS), is used in some video cameras. This technique shifts the electronic image from frame to frame of video, enough to counteract the motion. It uses pixels outside the border of the visible frame to provide a buffer for the motion. This technique reduces distracting vibrations from videos by smoothing the transition from one frame to another. This technique does not affect the noise level of the image, except in the extreme borders when the image is extrapolated. It cannot do anything about existing motion blur, which may result in an image seemingly losing focus as motion is compensated.

Some still camera manufacturers marketed their cameras as having digital image stabilization when they really only had a high-sensitivity mode that uses a short exposure time—producing pictures with less motion blur, but more noise. It reduces blur when photographing something that is moving, as well as from camera shake.

Others now also use digital signal processing (DSP) to reduce blur in stills, for example by sub-dividing the exposure into several shorter exposures in rapid succession, discarding blurred ones, re-aligning the sharpest sub-exposures and adding them together, and using the gyroscope to detect the best time to take each frame.

Many video non-linear editing systems use stabilization filters that can correct a non-stabilized image by tracking the movement of pixels in the image and correcting the image by moving the frame. The process is similar to digital image stabilization but since there is no larger image to work with the filter either crops the image down to hide the motion of the frame or attempts to recreate the lost image at the edge through spatial or temporal extrapolation.

Online services, including YouTube, are also beginning to provide 'video stabilization as a post-processing step after content is uploaded. This has the disadvantage of not having access to the realtime gyroscopic data, but the advantage of more computing power and the ability to analyze images both before and after a particular frame.
Orthogonal transfer CCD

Used in astronomy, an orthogonal transfer CCD (OTCCD) actually shifts the image within the CCD itself while the image is being captured, based on analysis of the apparent motion of bright stars. This is a rare example of digital stabilization for still pictures. An example of this is in the upcoming gigapixel telescope Pan-STARRS being constructed in Hawaii.

A technique that requires no additional capabilities of any camera body–lens combination consists of stabilizing the entire camera body externally rather than using an internal method. This is achieved by attaching a gyroscope to the camera body, usually using the camera's built-in tripod mount. This lets the external gyro stabilize the camera, and is typically used in photography from a moving vehicle when a lens or camera offering another type of image stabilization is not available.

This has been integrated into camcorders by allowing the sensor and lens assembly to move together within the camera housing.

Another technique for stabilizing a video or motion picture camera body is the Steadicam system, which isolates the camera from the operator's body using a harness and a camera boom with a counterweight.

A camera stabilizer is any device or object that externally stabilizes the camera. This can refer to a Steadicam, a tripod, the camera operator's hand, or a combination of these.

In close-up photography, using rotation sensors to compensate for changes in pointing direction becomes insufficient. Moving, rather than tilting, the camera up/down or left/right by a fraction of a millimeter becomes noticeable if you are trying to resolve millimeter-size details on the object. Linear accelerometers in the camera, coupled with information such as the lens focal length and focused distance, can feed a secondary correction into the drive that moves the sensor or optics, to compensate for linear as well as a rotational shake. 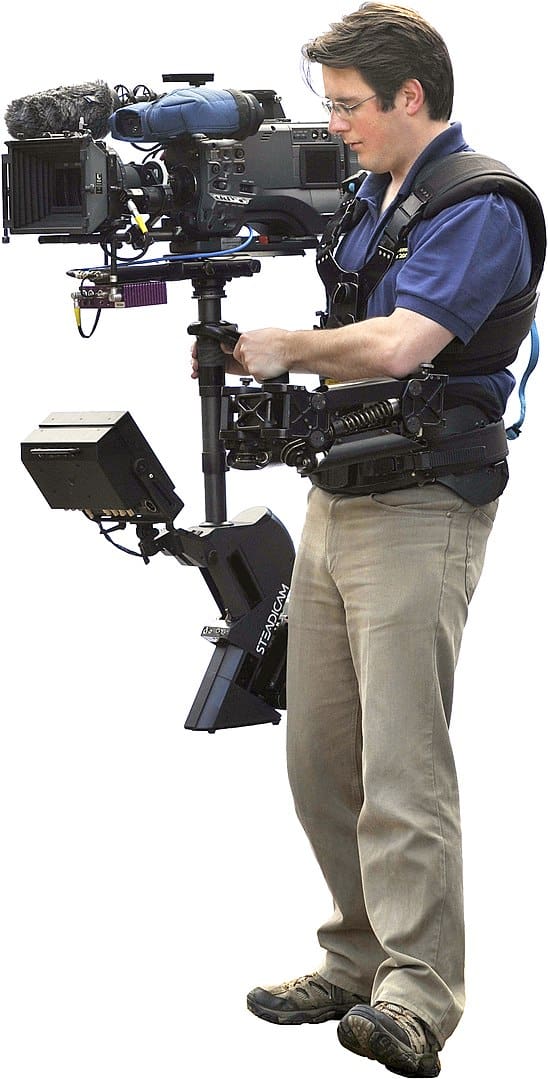 Image stabilization
see also
source
Adapted from content published on wikipedia.org
credit
Last modified on August 20, 2019, 1:25 am
previous
next
Videocide.com is a service provided by Codecide, a company located in Chicago, IL USA.