The measure of the opposition that a circuit presents to a current when a voltage is applied. The term complex impedance may be used interchangeably.

Electrical impedance is the measure of the opposition that a circuit presents to a current when a voltage is applied. The term complex impedance may be used interchangeably.

Impedance extends the concept of resistance to AC circuits, and possesses both magnitude and phase, unlike resistance, which has only magnitude. When a circuit is driven with direct current (DC), there is no distinction between impedance and resistance; the latter can be thought of as impedance with zero phase angle.

The notion of impedance is useful for performing AC analysis of electrical networks, because it allows relating sinusoidal voltages and currents by a simple linear law. In multiple port networks, the two-terminal definition of impedance is inadequate, but the complex voltages at the ports and the currents flowing through them are still linearly related by the impedance matrix.

Impedance is a complex number, with the same units as resistance, for which the SI unit is the ohm (Ω). Its symbol is usually Z, and it may be represented by writing its magnitude and phase in the form |Z|∠θ. However, cartesian complex number representation is often more powerful for circuit analysis purposes.

The reciprocal of impedance is admittance, whose SI unit is the siemens, formerly called mho. 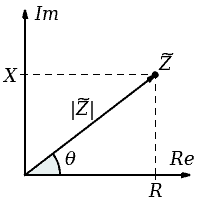 glossary_ I - 400
see also
source
Adapted from content published on wikipedia.org
Last modified on May 17, 2019, 8:55 am
previous
next
Videocide.com is a service provided by Codecide, a company located in Chicago, IL USA.