Ending a scene with a closing circle that comes in from the edges of the screen.

An iris shot is a technique frequently used in silent film in which a black circle closes to end a scene.

The iris shot is divided into two types depending on their use. An iris out is used at the end of a scene, and an iris-in is used at the start of a scene, often after a previous iris out. Iris shots are used to put emphasis on a particular aspect of film, usually something of importance.

Some non-silent era slapstick comedy—such as that of Red Skelton, Benny Hill, and Warner Bros. Road Runner cartoons—employ the iris shot as an homage to the silent film era. In Walt Disney cartoons, after the title card, they usually begin with an iris in and end with an iris out.

In some cartoons and live-action films (and certain television shows like The King of Queens and Mike & Molly), iris shots are used as a way to break the fourth wall, usually for comedic purposes or to allow characters to interact with the audience (as opposed to a simple fade out or cut to black). Examples of this include characters trying to escape through the closing iris, addressing the audience with a one-liner before the iris closes, or holding the iris open to try and continue a monologue. Mister Rogers' Neighborhood uses this technique at the beginning and end of the Neighborhood of Make-Believe segments, usually when the Trolley goes through the tunnel on the left side of the Castle, and through the right side of Mister Rogers house. 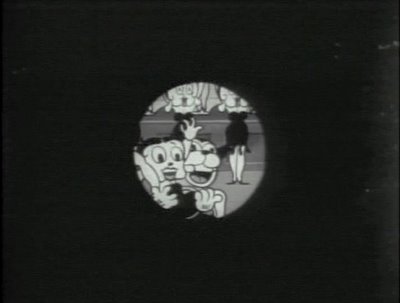 Iris-out
also known as
see also
resources
source
Adapted from content published on wikipedia.org
credit
Last modified on May 7, 2021, 12:25 pm
previous
next
Videocide.com is a service provided by Codecide, a company located in Chicago, IL USA.