Camera jib
A boom device with a camera on one end, and a counterweight and camera controls on the other.

In cinematography, a jib is a boom device with a camera on one end, and a counterweight and camera controls on the other. It operates like a see-saw, but with the balance point located close to the counterweight, so that the camera end of the arm can move through an extended arc. A jib permits the camera to be moved vertically, horizontally, or a combination of the two. A jib is often mounted on a tripod or similar support.

A jib is useful for getting high shots, or shots which need to move a great distance horizontally or vertically, without the expense and safety issues of putting a camera operator on a crane for a crane shot or laying track for a camera dolly. A jib can even be mounted on a dolly for shots in which the camera moves over obstacles such as furniture, when a normal dolly shot could not be used.

A jib is somewhat more complicated than a simple lever, since almost always the camera's aim needs to be controlled independently of the swing of the jib arm. This can be done by relatively simple mechanical means or by the use of remotely controlled electric servo motors.

Since the camera operator is often not able to use the camera's controls directly or look through the camera's viewfinder, a jib is often used in conjunction with a remote camera control for focus and zoom and with a portable video monitor.

A device known as a "hot head" or "remote head" is attached to the camera end of larger jibs. It supports the camera and enables remote pan/tilt functions with focus/zoom control. This setup can be operated by one person, or the circumstance may require two operators. In a two-operator situation, one person operates the jib arm/boom while another operates the pan/tilt/zoom functions of the remote head. 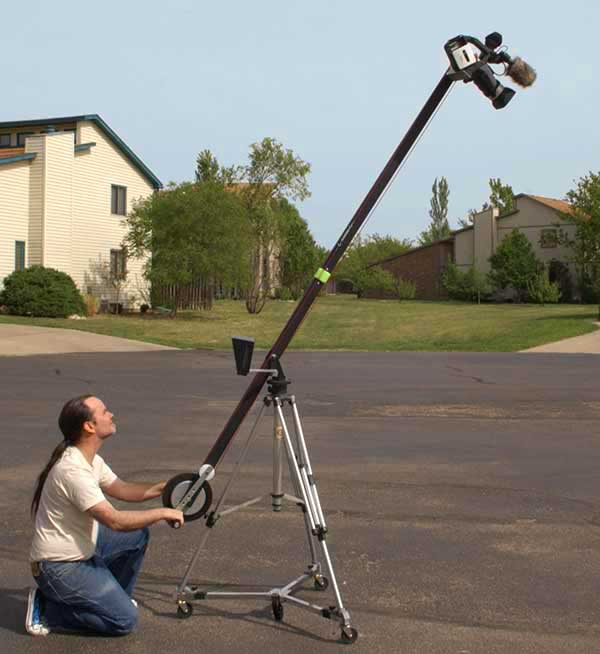 Jib
also known as
see also
resources
source
Adapted from content published on wikipedia.org
Last modified on April 21, 2021, 8:49 am
previous
next
Videocide.com is a service provided by Codecide, a company located in Chicago, IL USA.