A method of making a film copy of a television program in the days before the existence of Video Recorders.

Kinescope /ˈkɪnɪskoʊp/, shortened to kine /ˈkɪniː/, also known as telerecording in Britain, is a recording of a television program on motion picture film, directly through a lens focused on the screen of a video monitor. The process was pioneered during the 1940s for the preservation, re-broadcasting and sale of television programmes before the introduction of videotape from 1956 eventually superseded the use of kinescopes for all of these purposes. Kinescopes were the only practical way to preserve live television broadcasts prior to videotape.

Typically, the term Kinescope can refer to the process itself, the equipment used for the procedure (a 16 mm or 35 mm movie camera mounted in front of a video monitor, and synchronized to the monitor's scanning rate), or a film made using the process. The term originally referred to the cathode ray tube used in television receivers, as named by inventor Vladimir K. Zworykin in 1929. Hence, the recordings were known in full as kinescope films or kinescope recordings. RCA was granted a trademark for the term (for its cathode ray tube) in 1932; it voluntarily released the term to the public domain in 1950. 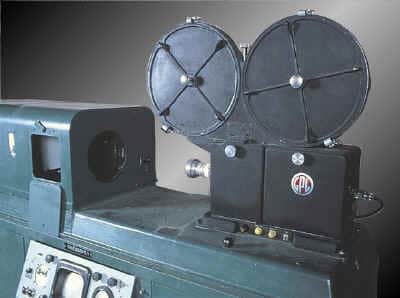