A flat-panel display or other electronically modulated optical device that uses the light-modulating properties of liquid crystals.

A liquid-crystal display (LCD) is a flat-panel display or other electronically modulated optical device that uses the light-modulating properties of liquid crystals. Liquid crystals do not emit light directly, instead using a backlight or reflector to produce images in color or monochrome. LCDs are available to display arbitrary images (as in a general-purpose computer display) or fixed images with low information content, which can be displayed or hidden, such as preset words, digits, and seven-segment displays, as in a digital clock. They use the same basic technology, except that arbitrary images are made up of a large number of small pixels, while other displays have larger elements. LCDs can either be normally on (positive) or off (negative), depending on the polarizer arrangement. For example, a character positive LCD with a backlight will have black lettering on a background that is the color of the backlight, and a character negative LCD will have a black background with the letters being of the same color as the backlight. Optical filters are added to white on blue LCDs to give them their characteristic appearance.

LCDs are used in a wide range of applications, including LCD televisions, computer monitors, instrument panels, aircraft cockpit displays, and indoor and outdoor signage. Small LCD screens are common in portable consumer devices such as digital cameras, watches, calculators, and mobile telephones, including smartphones. LCD screens are also used on consumer electronics products such as DVD players, video game devices and clocks. LCD screens have replaced heavy, bulky cathode ray tube (CRT) displays in nearly all applications. LCD screens are available in a wider range of screen sizes than CRT and plasma displays, with LCD screens available in sizes ranging from tiny digital watches to very large television receivers. LCDs are slowly being replaced by OLEDs, which can be easily made into different shapes, and have a lower response time, wider color gamut, virtually infinite color contrast and viewing angles, lower weight for a given display size and a slimmer profile (because OLEDs use a single glass or plastic panel whereas LCDs use two glass panels; the thickness of the panels increases with size but the increase is more noticeable on LCDs) and potentially lower power consumption (as the display is only "on" where needed and there is no backlight). OLEDs, however, are more expensive for a given display size due to the very expensive electroluminescent materials or phosphors that they use. Also due to the use of phosphors, OLEDs suffer from screen burn-in and there is currently no way to recycle OLED displays, whereas LCD panels can be recycled, although the technology required to recycle LCDs is not yet widespread. Attempts to increase the lifespan of LCDs are quantum dot displays, which offer similar performance as an OLED display, but the Quantum dot sheet that gives these displays their characteristics can not yet be recycled.

Since LCD screens do not use phosphors, they rarely suffer image burn-in when a static image is displayed on a screen for a long time, e.g., the table frame for an airline flight schedule on an indoor sign. LCDs are, however, susceptible to image persistence. The LCD screen is more energy-efficient and can be disposed of more safely than a CRT can. Its low electrical power consumption enables it to be used in battery-powered electronic equipment more efficiently than CRTs can be. By 2008, annual sales of televisions with LCD screens exceeded sales of CRT units worldwide, and the CRT became obsolete for most purposes.

Each pixel of an LCD typically consists of a layer of molecules aligned between two transparent electrodes, and two polarizing filters (parallel and perpendicular), the axes of transmission of which are (in most of the cases) perpendicular to each other. Without the liquid crystal between the polarizing filters, light passing through the first filter would be blocked by the second (crossed) polarizer. Before an electric field is applied, the orientation of the liquid-crystal molecules is determined by the alignment at the surfaces of electrodes. In a twisted nematic (TN) device, the surface alignment directions at the two electrodes are perpendicular to each other, and so the molecules arrange themselves in a helical structure, or twist. This induces the rotation of the polarization of the incident light, and the device appears gray. If the applied voltage is large enough, the liquid crystal molecules in the center of the layer are almost completely untwisted and the polarization of the incident light is not rotated as it passes through the liquid crystal layer. This light will then be mainly polarized perpendicular to the second filter, and thus be blocked and the pixel will appear black. By controlling the voltage applied across the liquid crystal layer in each pixel, light can be allowed to pass through in varying amounts thus constituting different levels of gray. Color LCD systems use the same technique, with color filters used to generate red, green, and blue pixels.

The optical effect of a TN device in the voltage-on state is far less dependent on variations in the device thickness than that in the voltage-off state. Because of this, TN displays with low information content and no backlighting are usually operated between crossed polarizers such that they appear bright with no voltage (the eye is much more sensitive to variations in the dark state than the bright state). As most of 2010-era LCDs are used in television sets, monitors and smartphones, they have high-resolution matrix arrays of pixels to display arbitrary images using backlighting with a dark background. When no image is displayed, different arrangements are used. For this purpose, TN LCDs are operated between parallel polarizers, whereas IPS LCDs feature crossed polarizers. In many applications IPS LCDs have replaced TN LCDs, in particular in smartphones such as iPhones. Both the liquid crystal material and the alignment layer material contain ionic compounds. If an electric field of one particular polarity is applied for a long period of time, this ionic material is attracted to the surfaces and degrades the device performance. This is avoided either by applying an alternating current or by reversing the polarity of the electric field as the device is addressed (the response of the liquid crystal layer is identical, regardless of the polarity of the applied field).

Displays for a small number of individual digits or fixed symbols (as in digital watches and pocket calculators) can be implemented with independent electrodes for each segment. In contrast, full alphanumeric or variable graphics displays are usually implemented with pixels arranged as a matrix consisting of electrically connected rows on one side of the LC layer and columns on the other side, which makes it possible to address each pixel at the intersections. The general method of matrix addressing consists of sequentially addressing one side of the matrix, for example by selecting the rows one-by-one and applying the picture information on the other side at the columns row-by-row. For details on the various matrix addressing schemes see passive-matrix and active-matrix addressed LCDs. 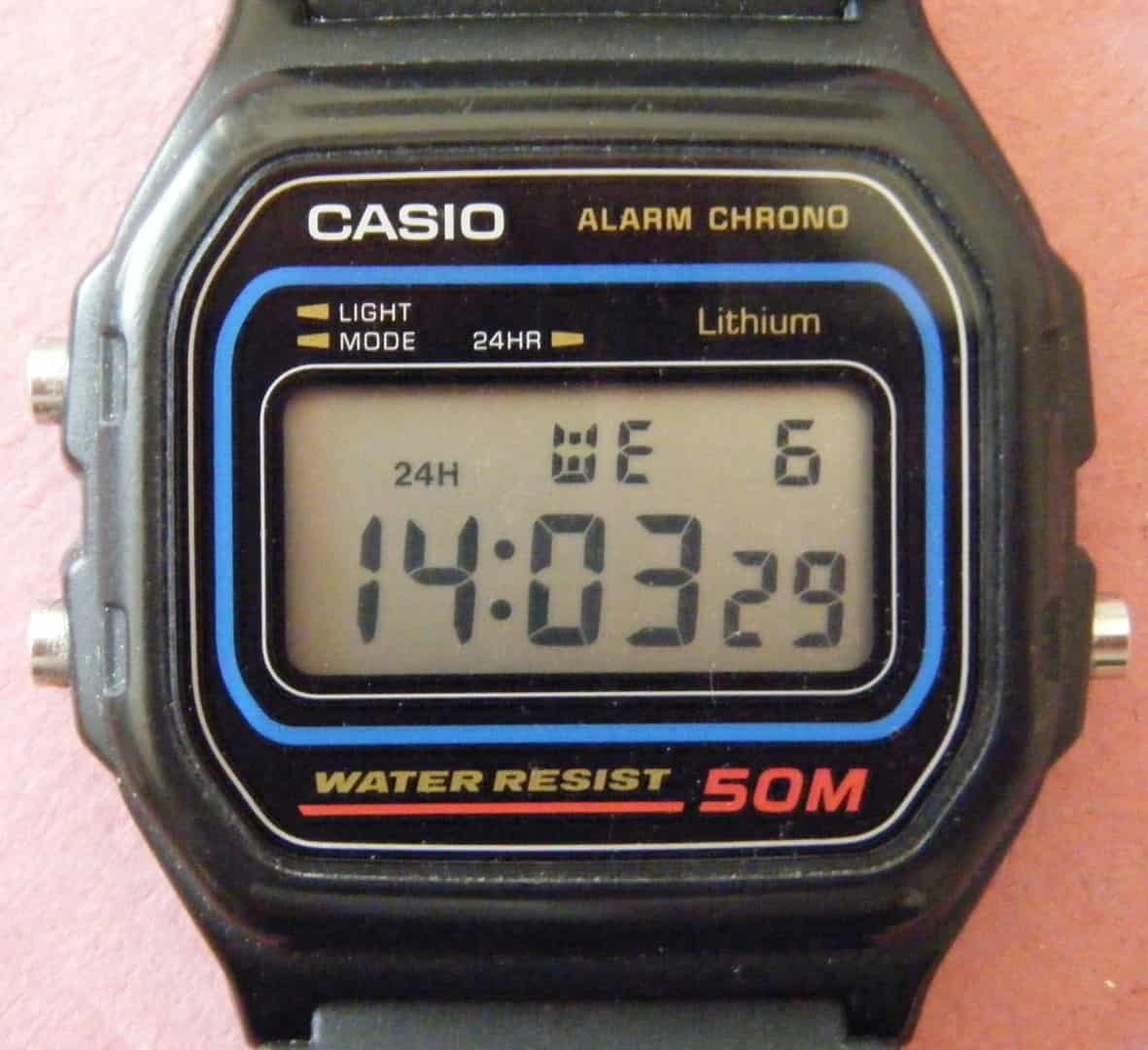