Liquid crystal on silicon (LCoS or LCOS) is a miniaturized reflective active-matrix liquid-crystal display or "microdisplay" using a liquid crystal layer on top of a silicon backplane. It is also referred to as a spatial light modulator. LCoS was initially developed for projection televisions but is now used for wavelength selective switching, structured illumination, near-eye displays, and optical pulse shaping. By way of comparison, some LCD projectors use transmissive LCD, allowing light to pass through the liquid crystal.

In an LCoS display, a CMOS chip controls the voltage on square reflective aluminum electrodes buried just below the chip surface, each controlling one pixel. For example, a chip with XGA resolution will have 1024x768 plates, each with an independently addressable voltage. Typical cells are about 1–3 centimeters square and about 2 mm thick, with pixel pitch as small as 2.79 μm. A common voltage for all the pixels is supplied by a transparent conductive layer made of indium tin oxide on the cover glass. 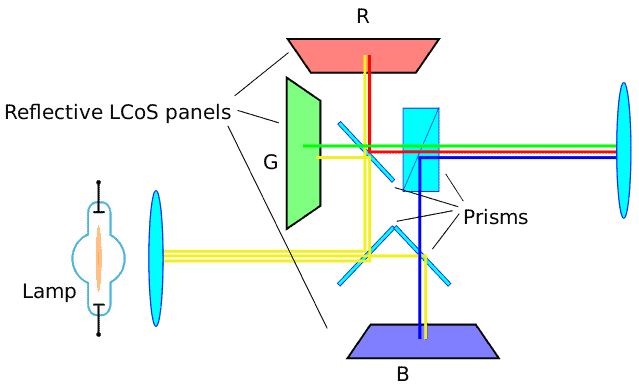 Liquid crystal on silicon
acronymn
also known as
see also
resources
source
Adapted from content published on wikipedia.org
credit
Last modified on September 25, 2020, 12:11 am
previous
next
Videocide.com is a service provided by Codecide, a company located in Chicago, IL USA.