Fushia
A red-purple color which is the complementary color of green.

Magenta (/məˈdʒɛntə/) is a color that is variously defined as purplish-red, reddish-purple or mauvish-crimson. On color wheels of the RGB (additive) and CMY (subtractive) color models, it is located midway between red and blue. It is one of the four colors of ink used in color printing by an inkjet printer, along with yellow, black, and cyan, to make all the other colors. The tone of magenta used in printing is called "printer's magenta".

Magenta took its name from an aniline dye made and patented in 1859 by the French chemist François-Emmanuel Verguin, who originally called it fuchsine. It was renamed to celebrate the Italian-French victory at the Battle of Magenta fought between the French and Austrians on June 4, 1859, near the Italian town of Magenta in Lombardy. A virtually identical color, called roseine, was created in 1860 by two British chemists: Chambers Nicolson and George Maule. 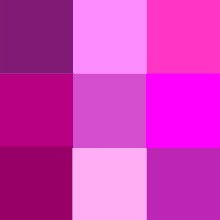 Magenta
also known as
see also
source
Adapted from content published on wikipedia.org
Last modified on June 27, 2019, 8:09 am
previous
next
Videocide.com is a service provided by Codecide, a company located in Chicago, IL USA.