A connector is used on certain Apple computers as a digital alternative to the Mini-VGA connector.

The Mini-DVI connector is used on certain Apple computers as a digital alternative to the Mini-VGA connector. Its size is between the full-sized DVI and the tiny Micro-DVI. It is found on the 12-inch PowerBook G4 (except the original 12-inch 867 MHz PowerBook G4, it used Mini-VGA), Intel-based iMac, the MacBook Intel-based laptop, the Intel-based Xserve, the 2009 Mac mini, and some late-model eMacs.

In October 2008, Apple announced the company was phasing Mini-DVI out in favor of Mini DisplayPort.

Mini-DVI connectors on Apple hardware are capable of carrying DVI, VGA, or TV signals through the use of adapters, detected with EDID (Extended display identification data) via DDC. This connector is often used in place of a DVI connector in order to save physical space on devices. Mini-DVI does not support dual-link connections and hence cannot support resolutions higher than 1920×1200 @60 Hz.

There are various types of Mini-DVI adapter:

A non-OEM Mini-DVI to HDMI Adapter is also available on certain online stores such as eBay and Amazon, and from some retail stores, but not from Apple.

The physical connector is similar to Mini-VGA but is differentiated by having four rows of pins arranged in two vertically stacked slots rather than the two rows of pins in the Mini-VGA.

Connecting to a DVI-I connector requires a Mini-DVI to DVI-D cable plus a DVI-D to DVI-I adapter. 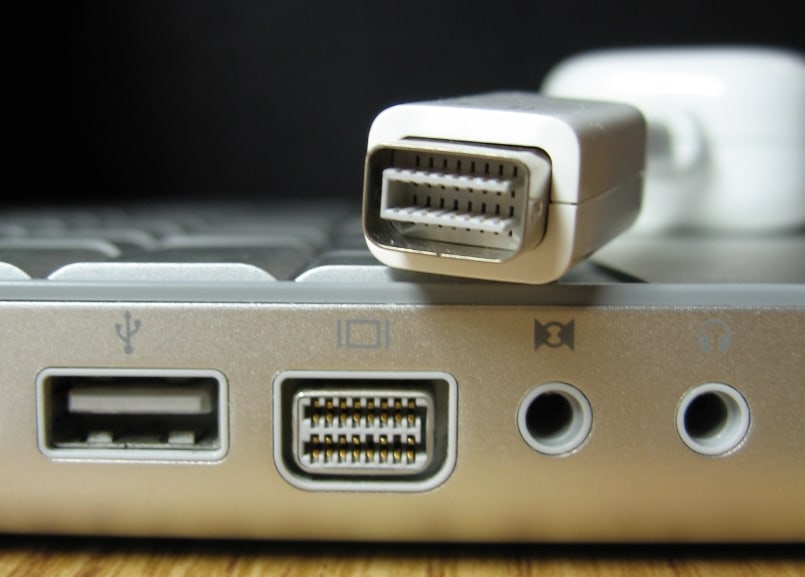