A hardware device that converts data into a format suitable for a transmission medium so that it can be transmitted from one computer to another (historically along telephone wires).

A modem – a portmanteau of "modulator-demodulator" – is a hardware device that converts data into a format suitable for a transmission medium so that it can be transmitted from one computer to another (historically along telephone wires). A modem modulates one or more carrier wave signals to encode digital information for transmission and demodulates signals to decode the transmitted information. The goal is to produce a signal that can be transmitted easily and decoded reliably to reproduce the original digital data. Modems can be used with almost any means of transmitting analog signals from light-emitting diodes to radio. A common type of modem is one that turns the digital data of a computer into a modulated electrical signal for transmission over telephone lines and demodulated by another modem at the receiver side to recover the digital data.

Modems are generally classified by the maximum amount of data they can send in a given unit of time, usually expressed in bits per second (symbol bit/s, sometimes abbreviated "bps") or rarely in bytes per second (symbol B/s). Modems can also be classified by their symbol rate, measured in baud. The baud unit denotes symbols per second or the number of times per second the modem sends a new signal. For example, the ITU V.21 standard used audio frequency-shift keying with two possible frequencies, corresponding to two distinct symbols (or one bit per symbol), to carry 300 bits per second using 300 baud. By contrast, the original ITU V.22 standard, which could transmit and receive four distinct symbols (two bits per symbol), transmitted 1,200 bits by sending 600 symbols per second (600 baud) using phase-shift keying.

News wire services in the 1920s used multiplex devices that satisfied the definition of a modem. However, the modem function was incidental to the multiplexing function, so they are not commonly included in the history of modems. Modems grew out of the need to connect teleprinters over ordinary phone lines instead of the more expensive leased lines which had previously been used for a current loop–based teleprinters and automated telegraphs.

In 1941, the Allies developed a voice encryption system called SIGSALY which used a vocoder to digitize speech, then encrypted the speech with one-time-pad and encoded the digital data as tones using frequency-shift keying.

Mass production of modems in the United States began as part of the SAGE air-defense system in 1958 (the year the word modem was first used), connecting terminals at various airbases, radar sites, and command-and-control centers to the SAGE director centers scattered around the United States and Canada. SAGE modems were described by AT&T's Bell Labs as conforming to their newly published Bell 101 dataset standard. While they ran on dedicated telephone lines, the devices at each end were no different from commercial acoustically coupled Bell 101, 110 baud modems.

The advent of metal–oxide–semiconductor field-effect transistor (MOSFET) technology, integrated circuit chips, and shift register MOS memory led to the application of solid-state microelectronic semiconductor technology and digital circuitry to the implementation of digital multi-channel modems in the 1960s. This enabled advantages such as very small size, lightweight, stability, high reliability, low cost, and freedom from adjustment.

The 201A and 201B Data-Phones were synchronous modems using two-bit-per-baud phase-shift keying (PSK). The 201A operated half-duplex at 2,000 bit/s over normal phone lines, while the 201B provided full-duplex 2,400 bit/s service on four-wire leased lines, the send and receive channels each running on their own set of two wires.

The Bell 103A dataset standard was also introduced by AT&T in 1962. It provided full-duplex service at 300 bit/s over normal phone lines. Frequency-shift keying was used, with the call originator transmitting at 1,070 or 1,270 Hz and the answering modem transmitting at 2,025 or 2,225 Hz. The readily available 103A2 gave an important boost to the use of remote low-speed terminals such as the Teletype Model 33 ASR and KSR, and the IBM 2741. AT&T reduced modem costs by introducing the originate-only 113D and the answer-only 113B/C modems. 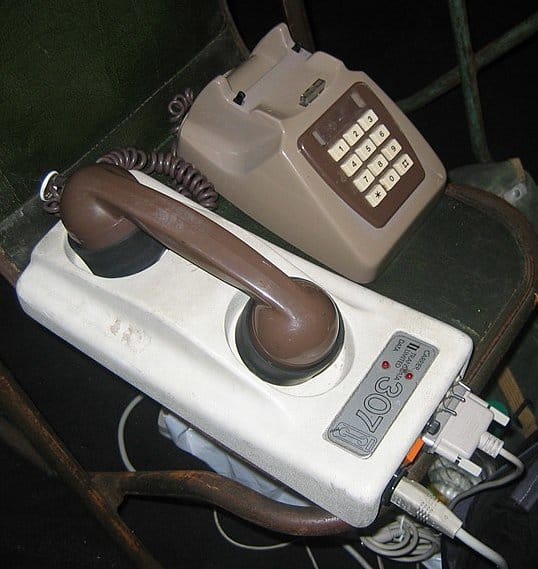 Modem
see also
source
Adapted from content published on wikipedia.org
credit
Last modified on March 2, 2020, 5:17 am
previous
next
Videocide.com is a service provided by Codecide, a company located in Chicago, IL USA.