A screen device capable of accepting direct input from a video source.

Broadcast reference monitors must be used for video compliance at television or television studio facilities, because they do not perform any video enhancements and try to produce as accurate an image as possible. For quality control purposes, it is necessary for a broadcast reference monitor to produce (reasonably) consistent images from facility to facility, to reveal any flaws in the material, and also not to introduce any image artifacts (such as aliasing) that is not in the source material. Broadcast monitors will try to avoid post processing such as a video scaler, line doubling and any image enhancements such as dynamic contrast. However, display technologies with fixed pixel structures (e.g. LCD, plasma) must perform image scaling when displaying SD signals as the signal contains non-square pixels while the display has square pixels. LCDs and plasmas are also inherently progressive displays and may need to perform deinterlacing on interlaced video signals.

Some professional video broadcast monitors display information on screen, the current video signal format, they might be receiving i.e.: standard definition formats like 576i, 480i or high definition formats like 720p or 1080p. They also have mechanical buttons to toggle common aspect ratios like (4:3 or 16:9), and underscanning or overscanning a picture to see lines in the vertical blanking interval (VBI) of video, and check if subtitles in VBI were inserted properly or not. Modern broadcast grade professional monitors also have safe area grid generators, to help position television graphics, lower thirds, within their respective areas i.e. graphics safe, title safe or action safe. 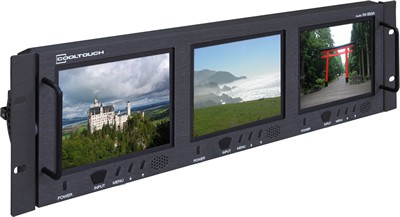 glossary_ M - 400
see also
source
Adapted from content published on wikipedia.org
Last modified on May 18, 2019, 11:27 pm
previous
next
Videocide.com is a service provided by Codecide, a company located in Chicago, IL USA.