A single staff or pole used to help support cameras, binoculars, rifles or other precision instruments in the field.

A monopod, also called a unipod, is a single staff or pole used to help support cameras, binoculars, rifles or other precision instruments in the field.

The monopod allows a still camera to be held steadier, allowing the photographer to take sharp pictures at slower shutter speeds, and/or with longer focal length lenses. In the case of video, it reduces camera shake, and therefore most of the resulting small random movements. Monopods are easier to transport and quicker to set up than conventional tripods, making them preferable for on-the-go (OTG) photography. An OTG photographer is not able to carry a heavy, bulky tripod around, and when he or she sees a potential shot, there is no time to bother with setting up a complicated tripod. A simple monopod is easy to carry, easy to set up, and enables the photographer to take advantage of the situation he or she is presented with, all while providing camera support to capture a clear, sharp image. Examples of situations in which a monopod is preferable include wildlife and sports photography where you can dramatically increase the stability of long lenses, travel photography, particularly around the golden hours and of course outdoor macro photography, especially when trying to photograph insects etc.

When used by itself, it eliminates camera shake in the vertical axis. When used in combination with leaning against a large object, a bipod is formed; this can also eliminate horizontal motion.

Unlike a tripod, monopods cannot support a camera independently. In the case of still cameras, this limits the shutter speed that can be used. They still allow lower shutter speeds than hand holding, and are easier to carry and use than a tripod. Because it confers less stability than a tripod, monopods may present difficulties when trying to get a good image with very low light photography, i.e. night time, and shots where you need a 100% stable camera for example shooting light trails or landscapes with extreme depth of field.

Many monopods can also be used as a "beltpod," meaning that the foot of the monopod can rest on the belt or hip of the photographer. This is usually used in selfies for clearer shots by ensuring that the camera is not in motion relative to the body.

With a special adapter, monopods can be used as a "chestpod", meaning that the foot rests now on the chest of the photographer. The result is that the camera is held more steadily than by hand alone (though not as steadily as when the foot is planted on the ground), and the camera/monopod is completely mobile, travelling with the photographer's movements. This technique is widely used in videography in which the photographer has to move with the subject e.g. first-person scenes, and is also especially useful for disabled photographers.

Generally, in terms of mobility versus stability, if mobility increases, stability decreases as follows:

Walking sticks or "trekking poles" exist that have a 1/4"-20 threaded stud on the top of the handle, usually covered by a cap when not in use, allowing them to double as a camera monopod. The user would usually need to carry a ball swivel adapter separately and mount it as needed.

Monopods used with a smartphone or camera to take selfie photographs beyond the normal reach of the arm are known as selfie sticks, and (depending on the model) may have Bluetooth connectivity. 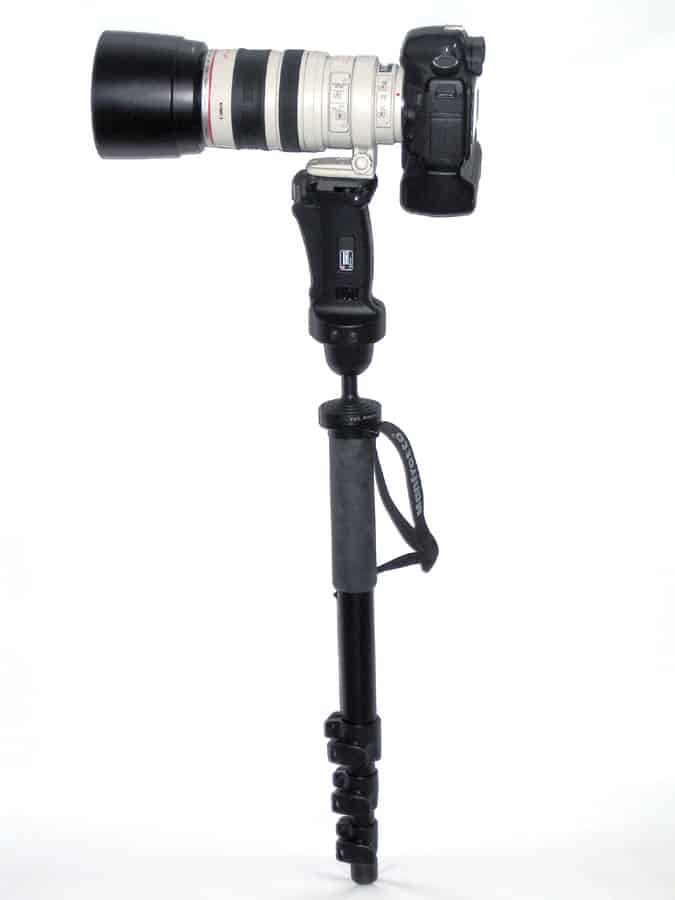 Monopod
see also
source
Adapted from content published on wikipedia.org
Last modified on May 29, 2019, 8:36 am
previous
next
Videocide.com is a service provided by Codecide, a company located in Chicago, IL USA.