An Audio Engineering Society (AES) standard that defines the data format and electrical characteristics of an interface that carries multiple channels of digital audio.

Multichannel Audio Digital Interface (MADI) or AES10 is an Audio Engineering Society (AES) standard that defines the data format and electrical characteristics of an interface that carries multiple channels of digital audio. The AES first documented the MADI standard in AES10-1991 and updated it in AES10-2003 and AES10-2008. The MADI standard includes a bit-level description and has features in common with the two-channel AES3 interface.

MADI supports serial digital transmission over coaxial cable or fiber-optic lines of 28, 56, or 32, 64 channels; and sampling rates to 962 kHz and beyond:5.1 with an audio bit depth of up to 24 bits per channel. Like AES3 and ADAT Lightpipe, it is a unidirectional interface from one sender to one receiver.

MADI was developed by AMS Neve, Solid State Logic, Sony, and Mitsubishi and is widely used in the audio industry, especially in the professional audio sector. It provides advantages over other audio digital interface protocols and standards such as AES3, ADAT Lightpipe, TDIF (Tascam Digital Interface), and S/PDIF (Sony/Philips Digital Interface). These advantages include:

Audio over Ethernet of various types is the primary alternative to MADI for the transport of many channels of professional digital audio. 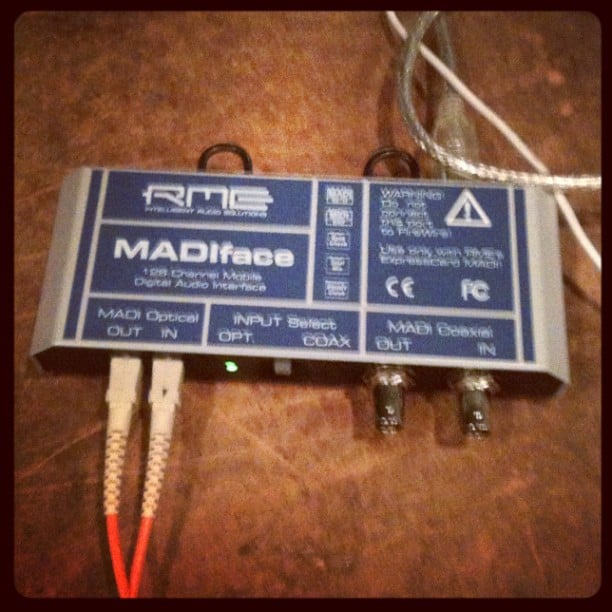 Multichannel Audio Digital Interface
acronymn
also known as
see also
source
Adapted from content published on wikipedia.org
credit
Last modified on May 13, 2020, 12:08 am
previous
next
Videocide.com is a service provided by Codecide, a company located in Chicago, IL USA.