The measurement of light and its properties.

Photometry is the science of the measurement of light, in terms of its perceived brightness to the human eye. It is distinct from radiometry, which is the science of measurement of radiant energy (including light) in terms of absolute power. In modern photometry, the radiant power at each wavelength is weighted by a luminosity function that models human brightness sensitivity. Typically, this weighting function is the photopic sensitivity function, although the scotopic function or other functions may also be applied in the same way.

The human eye is not equally sensitive to all wavelengths of visible light. Photometry attempts to account for this by weighing the measured power at each wavelength with a factor that represents how sensitive the eye is at that wavelength. The standardized model of the eye's response to light as a function of wavelength is given by the luminosity function. The eye has different responses as a function of wavelength when it is adapted to light conditions (photopic vision) and dark conditions (scotopic vision). Photometry is typically based on the eye's photopic response, and so photometric measurements may not accurately indicate the perceived brightness of sources in dim lighting conditions where colors are not discernible, such as under just moonlight or starlight. Photopic vision is characteristic of the eye's response at luminance levels over three candelas per square meter. Scotopic vision occurs below 2 × 10−5 cd/m2. Mesopic vision occurs between these limits and is not well characterized for the spectral response.

Measurement of the effects of electromagnetic radiation became a field of study as early as the end of the 18th century. Measurement techniques varied depending on the effects under study and gave rise to different nomenclature. The total heating effect of infrared radiation as measured by thermometers led to the development of radiometric units in terms of total energy and power. The use of the human eye as a detector led to photometric units, weighted by the eye's response characteristic. The study of the chemical effects of ultraviolet radiation led to characterization by the total dose or actinometric units expressed in photons per second.

Many different units of measure are used for photometric measurements. People sometimes ask why there need to be so many different units, or ask for conversions between units that can't be converted (lumens and candelas, for example). We are familiar with the idea that the adjective "heavy" can refer to weight or density, which are fundamentally different things. Similarly, the adjective "bright" can refer to a light source which delivers a high luminous flux (measured in lumens), or to a light source which concentrates the luminous flux it has into a very narrow beam (candelas), or to a light source that is seen against a dark background. Because of the ways in which light propagates through three-dimensional space — spreading out, becoming concentrated, reflecting off shiny or matte surfaces — and because light consists of many different wavelengths, the number of fundamentally different kinds of light measurement that can be made is large, and so are the numbers of quantities and units that represent them.

For example, offices are typically "brightly" illuminated by an array of many recessed fluorescent lights for a combined high luminous flux. A laser pointer has very low luminous flux (it could not illuminate a room) but is blindingly bright in one direction (high luminous intensity in that direction). 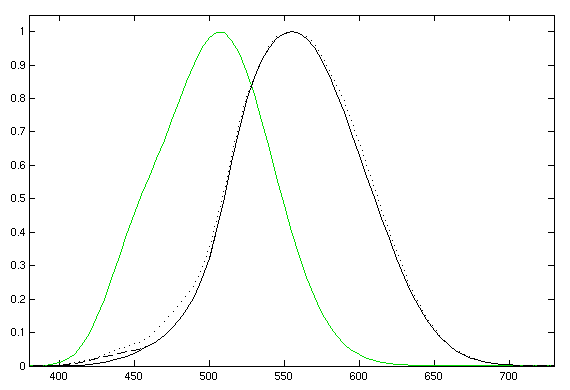 Photometry
see also
source
Adapted from content published on wikipedia.org
credit
Last modified on December 11, 2019, 8:06 am
previous
next
Videocide.com is a service provided by Codecide, a company located in Chicago, IL USA.