A sound signal that has an equal amount of energy per octave or fraction of an octave.

Pink noise or ​1⁄f noise is a signal or process with a frequency spectrum such that the power spectral density (energy or power per frequency interval) is inversely proportional to the frequency of the signal. Pink noise is the most common signal in biological systems. In pink noise, each octave (halving/doubling in frequency) carries an equal amount of noise energy. The name arises from the pink appearance of visible light with this power spectrum. This is in contrast with white noise which has equal intensity per frequency interval.

There is equal energy in all octaves (or similar log bundles) of frequency. In terms of power at a constant bandwidth, pink noise falls off at 3 dB per octave. At high enough frequencies pink noise is never dominant. (White noise has equal energy per frequency interval.)

The human auditory system, which processes frequencies in a roughly logarithmic fashion approximated by the Bark scale, does not perceive different frequencies with equal sensitivity; signals around 1–4 kHz sound loudest for a given intensity. However, humans still differentiate between white noise and pink noise with ease.

Graphic equalizers also divide signals into bands logarithmically and report power by octaves; audio engineers put pink noise through a system to test whether it has a flat frequency response in the spectrum of interest. Systems that do not have a flat response can be equalized by creating an inverse filter using a graphic equalizer. Because pink noise has a tendency to occur in natural physical systems, it is often useful in audio production. Pink noise can be processed, filtered, and/or effects can be added to produce desired sounds. Pink-noise generators are commercially available.

One parameter of noise, the peak versus average energy contents, or crest factor, is important for testing purposes, such as for audio power amplifier and loudspeaker capabilities because the signal power is a direct function of the crest factor. Various crest factors of pink noise can be used in simulations of various levels of dynamic range compression in music signals. On some digital pink-noise generators the crest factor can be specified.

The principal sources of pink noise in electronic devices are almost invariably the slow fluctuations of properties of the condensed-matter materials of the devices. In many cases the specific sources of the fluctuations are known. These include fluctuating configurations of defects in metals, fluctuating occupancies of traps in semiconductors, and fluctuating domain structures in magnetic materials. The explanation for the approximately pink spectral form turns out to be relatively trivial, usually coming from a distribution of kinetic activation energies of the fluctuating processes. Since the frequency range of the typical noise experiment (e.g., 1 Hz – 1 kHz) is low compared with typical microscopic "attempt frequencies" (e.g., 1014 Hz), the exponential factors in the Arrhenius equation for the rates are large. Relatively small spreads in the activation energies appearing in these exponents then result in large spreads of characteristic rates. In the simplest toy case, a flat distribution of activation energies gives exactly a pink spectrum, because d d f ln ⁡ f = 1 f . {\displaystyle \textstyle {\frac {d}{df}}\ln f={\frac {1}{f}}.} \textstyle {\frac {d}{df}}\ln f={\frac {1}{f}}.

There is no known lower bound to background pink noise in electronics. Measurements made down to 10−6 Hz (taking several weeks) have not shown a ceasing of pink-noise behaviour.

A pioneering researcher in this field was Aldert van der Ziel.

A pink-noise source is sometimes deliberately included on analog synthesizers (although a white-noise source is more common), both as a useful audio sound source for further processing and as a source of random control voltages for controlling other parts of the synthesizer. 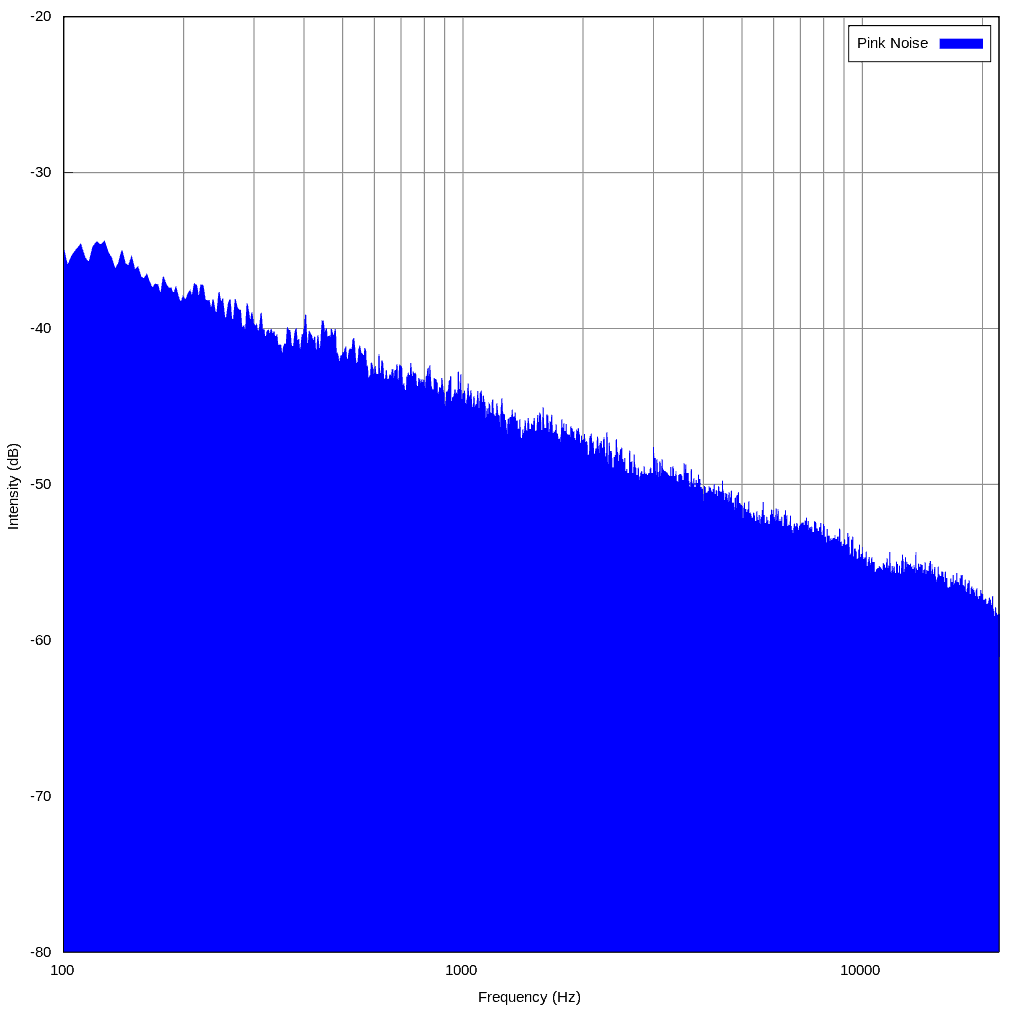 Pink noise
see also
source
Adapted from content published on wikipedia.org
Last modified on July 5, 2019, 9:48 am
previous
next
Videocide.com is a service provided by Codecide, a company located in Chicago, IL USA.