A mathematical ratio that describes how the width of a pixel in a digital image compares to the height of that pixel.

Pixel aspect ratio (often abbreviated PAR) is a mathematical ratio that describes how the width of a pixel in a digital image compares to the height of that pixel.

Use of pixel aspect ratio mostly involves pictures pertaining to standard-definition television and some other exceptional cases. Most other imaging systems, including those that comply with SMPTE standards and practices, use square pixels.

In analog images such as film there is no notion of pixel, nor notion of SAR or PAR, but in the digitization of analog images the resulting digital image has pixels, hence SAR (and accordingly PAR, if displayed at the same aspect ratio as the original).

Non-square pixels arise often in early digital TV standards, related to digitalization of analog TV signals – whose vertical and "effective" horizontal resolutions differ and are thus best described by non-square pixels – and also in some digital video cameras and computer display modes, such as Color Graphics Adapter (CGA). Today they arise also in transcoding between resolutions with different SARs.

Actual displays do not generally have non-square pixels, though digital sensors might; they are rather a mathematical abstraction used in resampling images to convert between resolutions.

There are several complicating factors in understanding PAR, particularly as it pertains to digitization of analog video:

First, analog video does not have pixels, but rather a raster scan, and thus has a well-defined vertical resolution (the lines of the raster), but not a well-defined horizontal resolution, since each line is an analog signal. However, by a standardized sampling rate, the effective horizontal resolution can be determined by the sampling theorem, as is done below.
Second, due to overscan, some of the lines at the top and bottom of the raster are not visible, as are some of the possible image on the left and right – see Overscan: Analog to digital resolution issues. Also, the resolution may be rounded (DV NTSC uses 480 lines, rather than the 486 that are possible).
Third, analog video signals are interlaced – each image (frame) is sent as two "fields", each with half the lines. Thus pixels are either twice as tall as they would be without interlacing, or the image is deinterlaced. 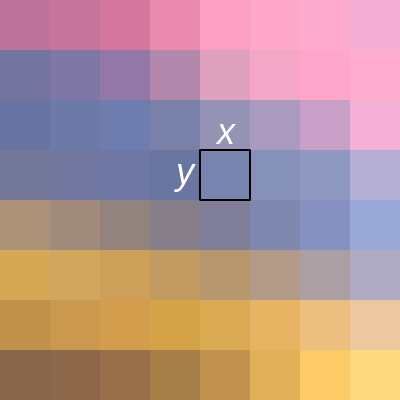