Until about 2007, plasma displays were commonly used in larger televisions (30 inches (76 cm) and larger). Since then, they have lost nearly all market share due to competition from low-cost LCD displays and more expensive but high-contrast OLED flat-panel displays. Manufacturing of plasma displays for the United States retail market ended in 2014, and manufacturing for the Chinese market ended in 2016.

Plasma displays are bright (1,000 lux or higher for the module), have a wide color gamut, and can be produced in fairly large sizes—up to 3.8 metres (150 in) diagonally. They had a very low-luminance "dark-room" black level compared with the lighter grey of the unilluminated parts of an LCD screen. (As plasma panels are locally lit and do not require a backlight, blacks are blacker on plasmas and greyer on LCDs.) LED-backlit LCD televisions have been developed to reduce this distinction. The display panel itself is about 6 cm (2.4 in) thick, generally allowing the device's total thickness (including electronics) to be less than 10 cm (3.9 in). Power consumption varies greatly with picture content, with bright scenes drawing significantly more power than darker ones – this is also true for CRTs as well as modern LCDs where LED backlight brightness is adjusted dynamically. The plasma that illuminates the screen can reach a temperature of at least 1200 °C (2200 °F). Typical power consumption is 400 watts for a 127 cm (50 in) screen. Most screens are set to "shop" mode by default, which draws at least twice the power (around 500–700 watts) of a "home" setting of less extreme brightness. The lifetime of the latest generation of plasma displays is estimated at 100,000 hours of actual display time, or 27 years at 10 hours per day. This is the estimated time over which maximum picture brightness degrades to half the original value.

Plasma screens are made out of glass, which may result in glare on the screen from nearby light sources. Currently, plasma panels cannot be economically manufactured in screen sizes smaller than 82 centimetres (32 in). Although a few companies have been able to make plasma enhanced-definition televisions (EDTV) this small, even fewer have made 32 inch plasma HDTVs. With the trend toward large-screen television technology, the 32 inch screen size is rapidly disappearing. Though considered bulky and thick compared with their LCD counterparts, some sets such as Panasonic's Z1 and Samsung's B860 series are as slim as 2.5 cm (1 in) thick making them comparable to LCDs in this respect.

Fixed-pixel displays such as plasma TVs scale the video image of each incoming signal to the native resolution of the display panel. The most common native resolutions for plasma display panels are 853×480 (EDTV), 1,366×768 or 1920×1080 (HDTV). As a result, picture quality varies depending on the performance of the video scaling processor and the upscaling and downscaling algorithms used by each display manufacturer. 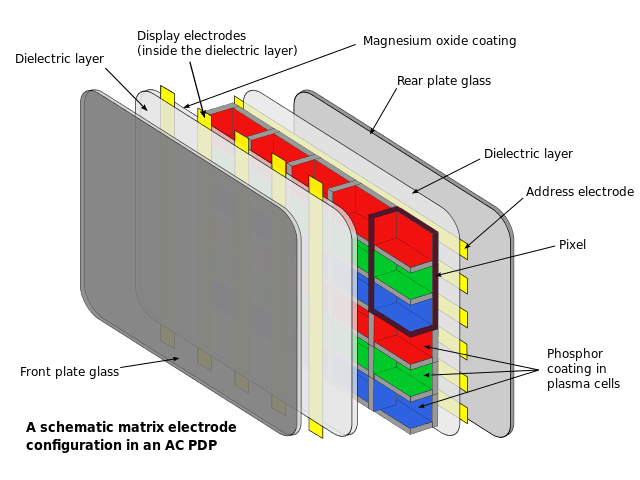 Plasma Screen
see also
source
Adapted from content published on wikipedia.org
Last modified on May 31, 2019, 1:48 pm
previous
next
Videocide.com is a service provided by Codecide, a company located in Chicago, IL USA.