A mathematical function that describes the response of an imaging system to a point source or point object.

The point spread function describes the response of an imaging system to a point source or point object. A more general term for the PSF is a system's impulse response, the PSF being the impulse response of a focused optical system. The PSF in many contexts can be thought of as the extended blob in an image that represents a single point object. In functional terms, it is the spatial domain version of the optical transfer function of the imaging system. It is a useful concept in Fourier optics, astronomical imaging, medical imaging, electron microscopy and other imaging techniques such as 3D microscopy (like in confocal laser scanning microscopy) and fluorescence microscopy.

The degree of spreading (blurring) of the point object is a measure for the quality of an imaging system. In non-coherent imaging systems, such as fluorescent microscopes, telescopes or optical microscopes, the image formation process is linear in the image intensity and described by linear system theory. This means that when two objects A and B are imaged simultaneously, the resulting image is equal to the sum of the independently imaged objects. In other words: the imaging of A is unaffected by the imaging of B and vice versa, owing to the non-interacting property of photons. In space-invariant system, i.e. the PSF is the same everywhere in the imaging space, the image of a complex object is then the convolution of the true object and the PSF.

By virtue of the linearity property of optical non-coherent imaging systems, i.e.,

the image of an object in a microscope or telescope can be computed by expressing the object-plane field as a weighted sum over 2D impulse functions, and then expressing the image plane field as the weighted sum over the images of these impulse functions. This is known as the superposition principle, valid for linear systems. The images of the individual object-plane impulse functions are called point spread functions, reflecting the fact that a mathematical point of light in the object plane is spread out to form a finite area in the image plane (in some branches of mathematics and physics, these might be referred to as Green's functions or impulse response functions).

When the object is divided into discrete point objects of varying intensity, the image is computed as a sum of the PSF of each point. As the PSF is typically determined entirely by the imaging system (that is, microscope or telescope), the entire image can be described by knowing the optical properties of the system. This imaging process is usually formulated by a convolution equation. In microscope image processing and astronomy, knowing the PSF of the measuring device is very important for restoring the (original) object with deconvolution. For the case of laser beams, the PSF can be mathematically modeled using the concepts of Gaussian beams. For instance, deconvolution of the mathematically modeled PSF and the image improves visibility of features, and removes imaging noise. 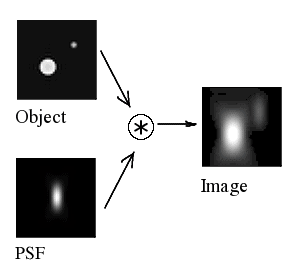